FLORENZ “FLO” ZIEGFELD was best known for his Follies, his elaborate musical stage revues. Whoopee! is one of the few book musicals he produced during the 1920s, based on the play “The Nervous Wreck” by Owen Davis. Though released in 1930, Whoopee! is very much a product of the ’20s, with its lavish costumes, humorous songs, and peppy dances. It was a star-vehicle for Eddie Cantor and his rendition of Makin’ Whoopee, the title song, became one of the most popular hits of 1928.

This movie has been called an antique for a variety of reasons. The racist and ethnic humor is quite insensitive by our modern standards. However, this show was extremely popular in its time and gives us a look back at the social mores of the day.

Wow! Talk about taking a musical off the Broadway stage. The opening scene is a western vista with mountains and Joshua trees. Two large groups of horseback riders gallop in, synchronized! 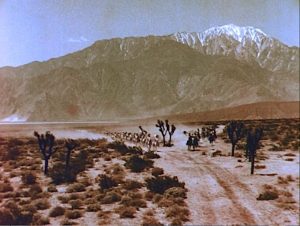 The film begins with a bang — a huge Busby Berkeley production number. Out in the desert of the American West, a large troop of white horses appears over the horizon. Beautiful girls in white hats ride the horses. Coming to meet them is a large troop of black horses ridden by boys with spotted chaps. The boys and girls are a group of young people getting ready for a big wedding. They tap dance, they sing, they do formations, everything you’d expect from a lavish Busby Berkeley spectacle. 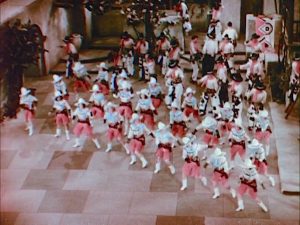 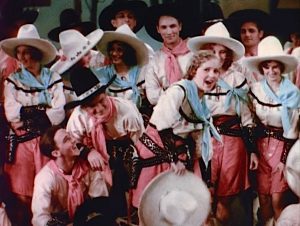 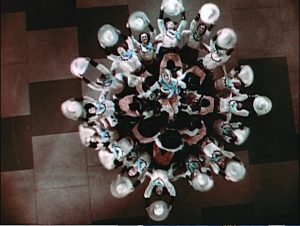 What is the story? Henry Williams (Eddie Cantor) is a hypochondriac who is convinced that he has multiple diseases and he’s just too fragile to live. He goes out West in a last attempt to regain his health. Miss Custer (Ethel Shutta) is his faithful nurse and she’s sure she can cure him. 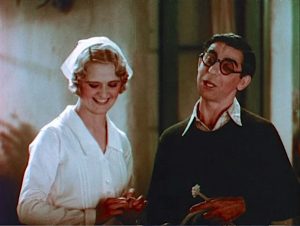 “My stomach is so bad, when my grandfather died and left me $20,000 and in 6 weeks I spent it all on milk of magnesia, would you believe that?” –Henry

Sheriff Bob Wells (John Rutherford) is the lawman in the village Henry visits. He wants to marry Sally Morgan (Eleanor Hunt). However, Dick, or Wanenis, (Paul Gregory) has been in love with Sally since they were kids. Dick has returned to town after graduating from college and working in the copper mines in Montana. He looks like good marriage material, but there’s a problem – he’s the son of Black Eagle, the local Native American chief. 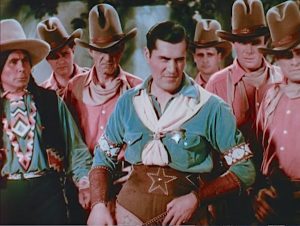 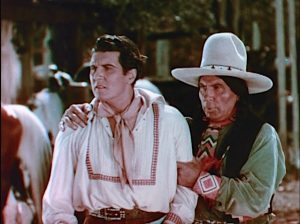 Henry gets himself tangled up in everyone’s romantic business all the while trying to keep Miss Custer at arm’s length.

Miss Custer: “Oh Henry, you must love me, you’re breathing so heavily!” Henry: “That’s not love, you fool, that’s my asthma!”

Henry spends most of the film involved in a series of screwball chases, as everyone misinterprets everyone else’s motives. 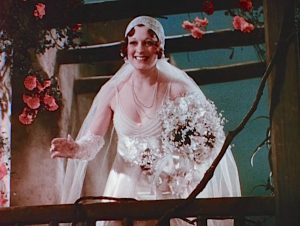 “Another bride / another groom / the countryside is all in bloom / the flowers and treeses / the birds and beeses / are makin’ whoopee!”

The song shows off the famous Eddie Cantor style, the huge rolling eyes, the clapping hand gestures, and the soft shoe. 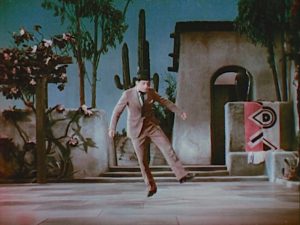 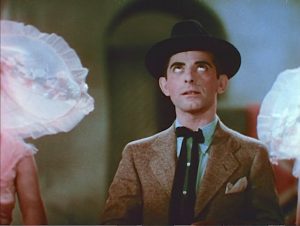 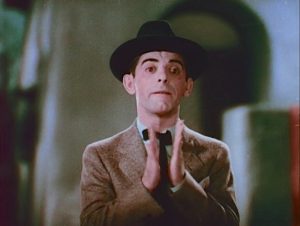 Another production number is staged at the Indian village. Beautiful girls come down a ramp on the mountain wearing skimpy, elegant costumes with large feather headdresses. Some of them parade on ponies. 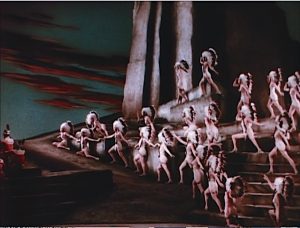 A very young Betty Grable is one of the Goldwyn Girls. She leads the opening Cowboys number. Make sure you get a good closeup view of her towards the end of the Stetson Hat number. 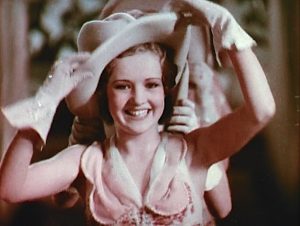 Eddie Cantor was very famous in the first half of the 20thcentury. He was a comedian, actor, singer, and dancer, and brought his New York immigrant style of humor to vaudeville first. Eventually he became a Broadway star in the Ziegfeld Follies and other musical comedies. He made movies, records, TV, and had a long-running radio show. He helped develop the March of Dimes and was known for his humanitarian work.

The girls are still beautiful, the costumes are still awe-inspiring, and the music is catchy. Many of the songs by Walter Donaldson and Gus Kahn are still popular today. And Samuel Goldwyn spared no expense in bringing all the spectacle of the stage show to the screen, employing a bevy of beauties, Busby Berkeley, and even using 2-strip Technicolor for the entire film. 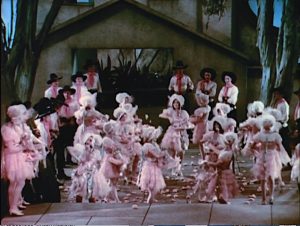 Blackface was used in American shows going back to the 1830s. Minstrel shows featured mocking caricatures of controversial stereotypes of black people and were a popular form of traveling show in the 19thcentury. Used primarily by white actors to play blacks, a few black actors used blackface in order to appear in front of white audiences. By the 1960s, blackface had mostly ended in the US. It is not something we want to see today as a reminder of a painful past. It’s hard to rate a movie when parts of it are so offensive. Watching this film can serve as a history lesson of past practices we do not want to repeat. You can watch the film to see the culture of the time without having to excuse the racism.