You are here: Home / Travel / Visit London United Kingdom things to do

Visiting London has been on my bucket list my whole life. I remember long summer afternoons trying to keep cool in front of a box fan, reading Dickens. I’ve read Pride and Prejudice over 40 times. I’ve read every Sherlock Holmes story and I love British TV and movies. And Winnie the Pooh and Beatrix Potter! I finally got to visit and I’m sharing some of my findings with you!

If you arrive in the morning in London, seasoned travelers advise you to try to get on schedule and stay up. We checked into the Lancaster Gate Hotel near Kensington Gardens and ate lunch at lunchtime. Some of my thoughts on choosing a London hotel: 1) It’s helpful for your hotel to be in walking distance of transportation, such as bus stop and tube station; 2) My husband and I have to sleep in a queen-size or larger. A standard room has a double bed. Look for Family room or two twins; 3) Be sure to check if you want air conditioning. We were there in a very hot July, so I was so happy I had done this; 4) Check if breakfast and other meals are served or if there are options close by. 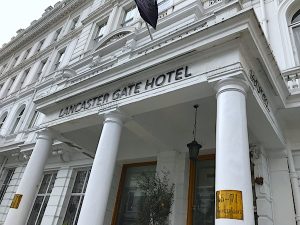 Lancaster Gate Hotel is on a quiet street just a block away from Bayswater. The bus stop is a short walk in one direction. Two underground stations and Paddington Station are within a few blocks. The Swan historic pub is very close along with Kensington Gardens and Palace. In addition, the hotel has breakfast buffet and full service bar and restaurant.

We found having a multi-day pass for a hop-on-hop-off bus to be very helpful. Sitting on top of a double-decker bus and using earphones to listen to the tour narrative helped us get a great overview of the city and think about how to get back to places where we wanted to spend time. Note: buses, taxis, and the subway do not have air conditioning in general. 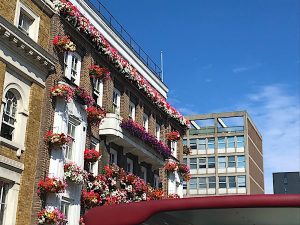 Harrod’s and Burberry’s are near each other in Belgravia. (Burberry’s actually has several stores around the city.) I thought the architecture of these stores was so beautiful – that style never made it into the buildings in Raleigh, NC! 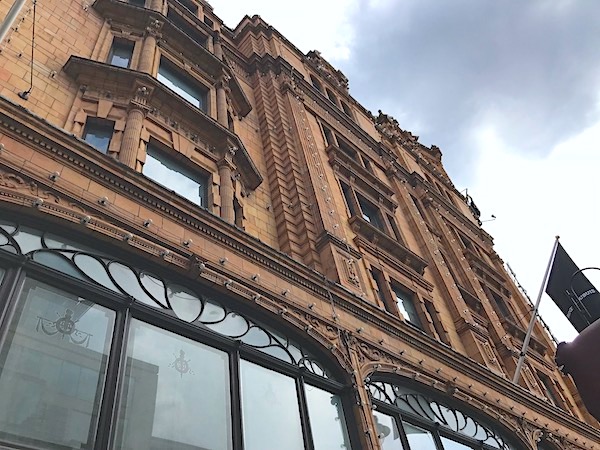 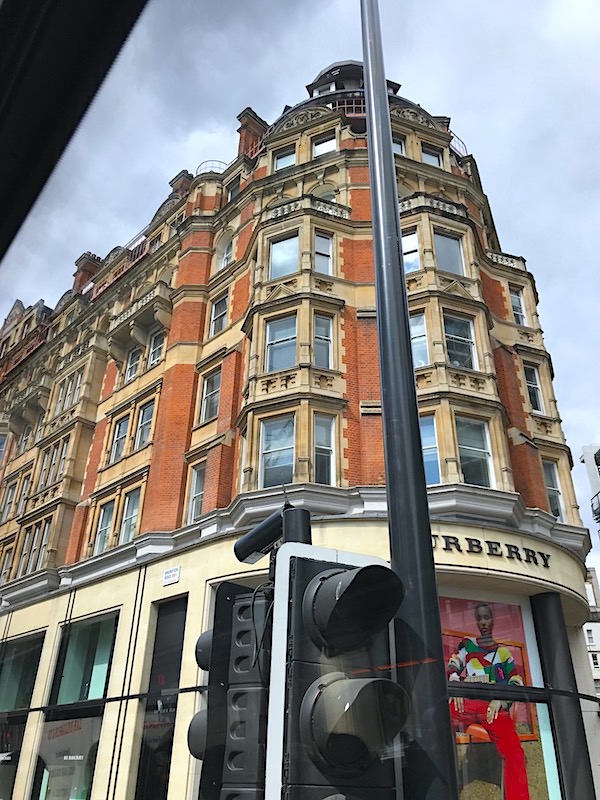 The Wellington Arch and the Marble Arch are at two corners of Hyde Park. Both of them were designed to be in front of the court of Buckingham Palace (you can see what it used to look like in the early 1800s in the TV show “Victoria”.) For many years, a large statue of the Duke of Wellington, champion of the Battle of Waterloo, was on top of the Wellington arch sideways. After years of complaints, a new victory statue was placed on top with a victorious goddess Nike behind a four-horse chariot. The Marble Arch was moved to its present location in 1851 and was used as a police station. They say only royalty can pass under the arch. 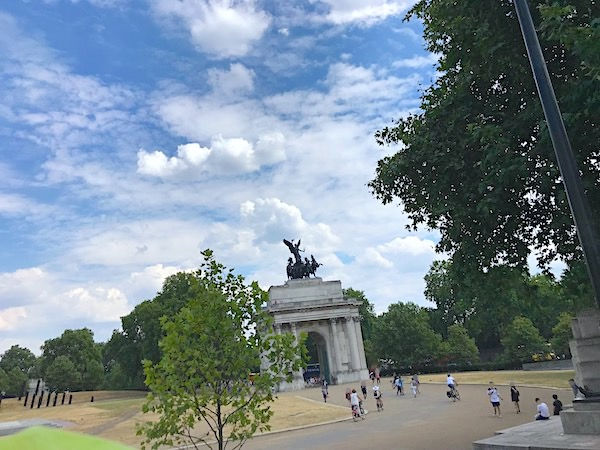 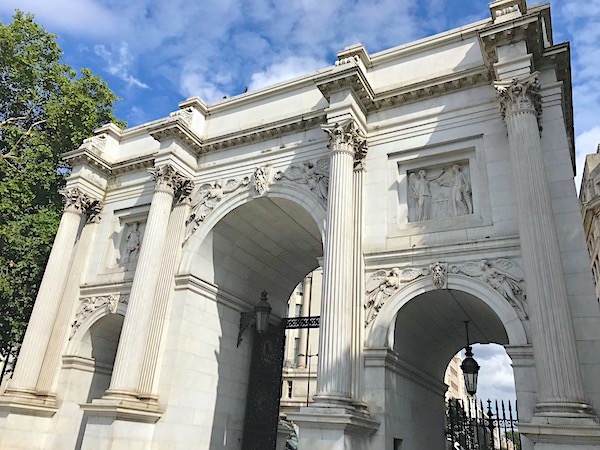 Queen Elizabeth was born in her grandparents’ house on Bruton Street. I was really struck by a queen and her family coming from just a “normal” street in the city. It was back in the days when people didn’t always use hospitals for child birth. 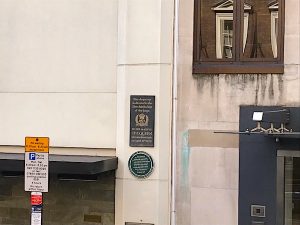 I love the lion on the Westminster Bridge. Made of Coade stone, a type of ceramic, it used to be the symbol of the old Lion Brewery. 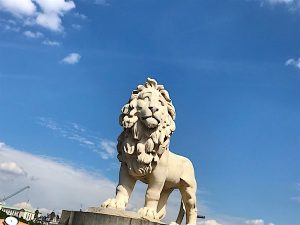 Sir Christopher Wren designed St. Paul’s Cathedral. I had to visit because Wren also designed a historic building at my alma mater, The College of William and Mary in Virginia. Some notes: 1) You will have to climb many steps to enter the front of the building. If you really need an elevator, go around to the south churchyard entrance; 2) There is a substantial fee to visit; 3) You are not allowed to take photos once you are in the building; 4) Allow an hour or more to tour the church. It is quite large and there are a whole lot of things to see in the basement crypt! 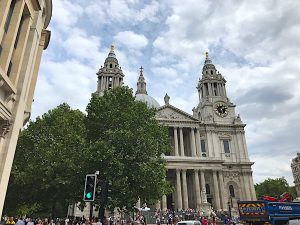 Queen Anne is the statue in front of the cathedral. She is surrounded by statues representing England, France, Ireland, and North America. 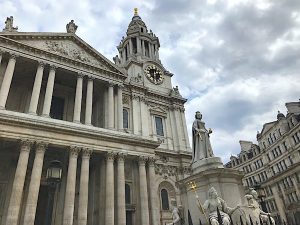 You can take a guided tour or an audio tour of the cathedral. It is a living church. I was struck by the ancient art alongside modern commemorations. There is a café and tearoom in the crypt. We asked and were shown to an elevator to take us down. You can also go up to the famous dome.

Tower Bridge and Tower of London

The Tower Bridge crosses the Thames River near the Tower of London. A suspension bridge and bascule bridge, it is an engineering marvel of the late 1800s. The bascules open and close with an electro-hydraulic drive system. 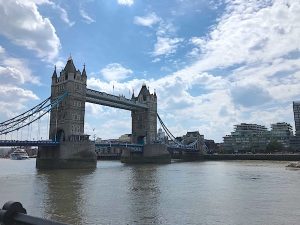 The Tower of London is one of the most historic and picturesque places to visit. It’s been a royal residence and a prison. It has a moat, the Royal Mint, and the Crown Jewels, and the ravens (cared for by a Yeoman Warder). Be prepared to spend at least half a day getting there and touring. The Tower is very popular and crowded. It covers 12 acres so there is quite a bit of walking. It is on a hill, so there are stairs within the grounds. 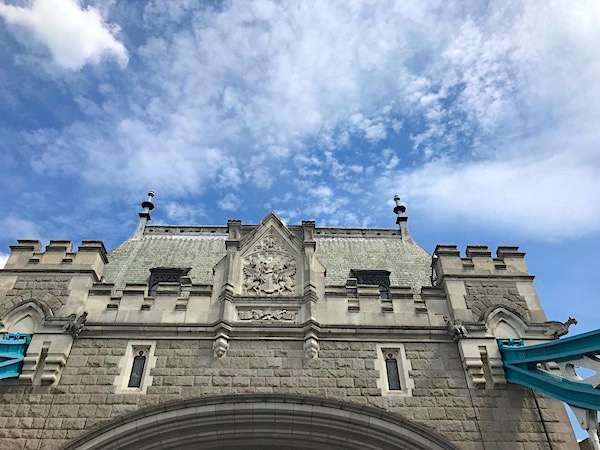 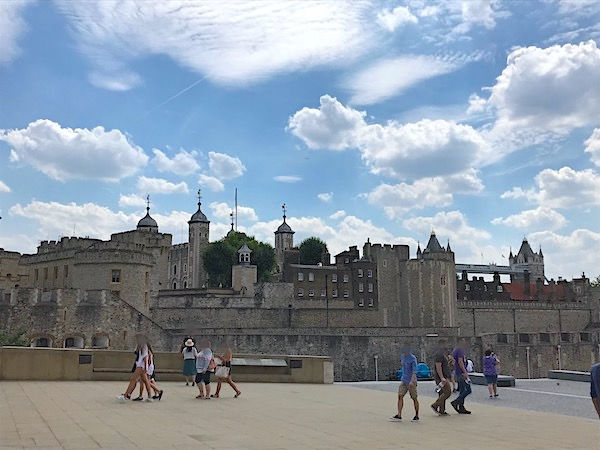 We bought a membership for the Historic Royal Palaces a couple months before our trip. I had figured out the entrance fee for each palace and garden we wanted to visit, and it was a savings to have the membership card. You have to allow enough time for your membership packet to be mailed to you. Having the card does allow you to bypass some of the lines you would have to stand in as a tourist. 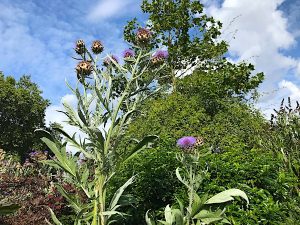