The Santa Clause (1994) is a contemporary Christmas classic film that does a great job of contrasting reality (office meetings, custody hearings, principal’s office) with the fantasy of Santa’s world.

The story begins with Scott Calvin (Tim Allen) getting honored at the office Christmas party for best sales for the toy company. He’s a divorced dad with a pretty hard attitude. 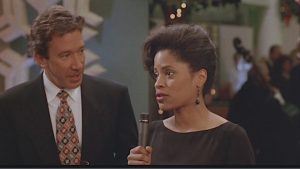 “Did that jerk tell Charlie there is no Santa Claus? –What no! Oh, Charlie came home from school the other days in tears because some big kid told him there was no such thing as Santa. And you know, Neal, well he sat him down –And told him there was a Santa Claus–Well, all he said was that Santa was more like a feeling, you know, more like a state of mind than a person. –Kind of like Neal. And who gave you permission to tell Charlie there is no Santa Claus. I think if we’re going to destroy our son’s illusions, I should be a part of it.” –Scott and Laura 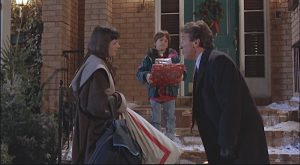 Scott tries to make a traditional huge turkey feast for Charlie and ends up burning most of it. It’s Christmas Eve, so they end up at Denny’s. The waitress seats them in the “divorced dads” section of the restaurant. It’s a sad and unjoyful Christmas Eve. 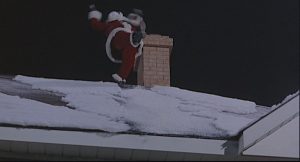 Charlie realizes that Scott needs to put on the Santa suit and get in the sleigh with the reindeer. The injured Santa has a card with the Santa clause on it in his pocket. The reindeer know where to go and Santa’s bag gets Scott up and down the chimneys. 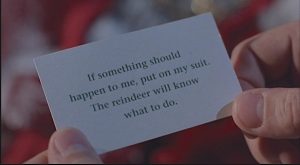 After a long night the reindeer return the sleigh to the North Pole where they meet the elf Bernard (David Krumholtz). Bernard gives Charlie a magic snow globe and Scott learns more about the Santa clause making him Santa. 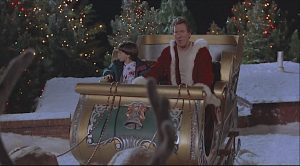 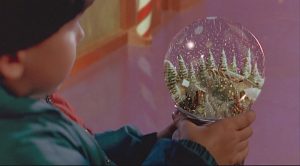 “The Santa Clause. By putting on the suit and entering the sleigh the wearer waives any and all rights to any previous identity real or implied and fully accepts the duties and responsibilities of Santa Claus in perpetuity until such time that wearer becomes unable to do so by either accident or design. –What does that mean? –It means you put on the suit, you’re the big guy!” –Bernard and Scott 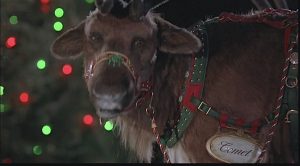 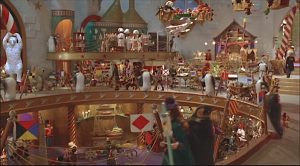 Scott has until Thanksgiving the next year to get ready to be Santa. He is absolutely not happy with the situation.

Back in real life, it’s career day at Charlie’s elementary school. Charlie tells the class that his father is Santa Claus. The whole family gets hauled into the principal’s office. Neal, Charlie’s stepfather, is a psychiatrist, which just adds to Scott’s problems. Charlie thinks about and plays North Pole all the time. Scott tries to convince him to keep “their dream” a secret, but meanwhile, his tummy grows rounder. 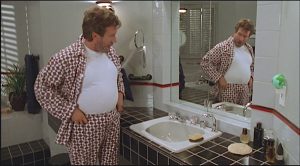 Scott starts having trouble at work because he is so opinionated about the toy company Christmas marketing and he’s so big he wears sweat suits to work. He continues to have problems with Laura and Scott ends up losing all visitation rights. 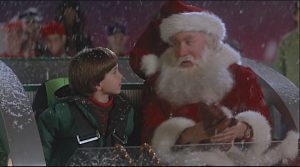 Scott and Bernard take Charlie to the North Pole that launches a police investigation and manhunt. Charlie has a real knack for inventions and reinvigorates the North Pole team. The police arrest Santa when he delivers to Laura and Neal’s house.

“We’re looking for Santa Claus. –Go home kids. Visiting hours are over. –We’re not kids. And we’re not visiting. –We’re here to bust out my dad. –You’re the Calvin boy. Who are these other kids? –We’re your worst nightmare. Elves.. with attitude.” —Elves, desk sergeant, and Charlie

The Santa Clause has a clever story and wonderful attention to detail. How does Santa go up the chimney? What does he do when there’s no chimney? His Santa suit is beautiful and the whole North Pole world is fantastic. The costumes for the elves are lush and vaguely medieval. The whole Santa’s workshop is just beautifully imagined. Enjoy a sweet Christmas story with great performances by Tim Allen, Eric Lloyd, and David Krumholtz.