Ayn Rand’s novel, The Fountainhead, is loosely based upon the career of Frank Lloyd Wright, though Rand, who also wrote the screenplay, continually denied it. This is a morality play about the strength of personal conviction. Gary Cooper brings Howard Roark alive in The Fountainhead (1949), which also stars Patricia Neal and Raymond Massey.

Howard Roark (Gary Cooper) is an architect who insists on following his own mind at all times. He is kicked out of design school for being too avant-garde and for refusing to take the advice of his professors. 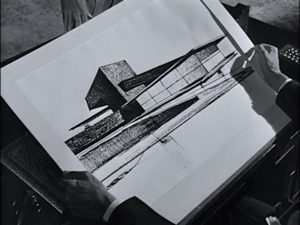 He works as an apprentice for a master architect who has modern ideas. (This master is based on Louis Sullivan, known as the father of modern architecture, one of the leaders of the Prairie School who built beautiful skyscrapers in Chicago in the 1920s and 1930s.) His character even says “Form follows function”, which was one of Sullivan’s most famous quotes. 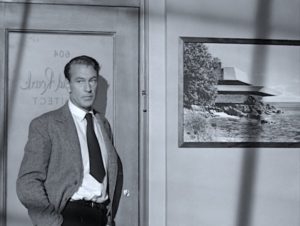 ” Oh, why did you have to come to me? I’m perfectly happy with the drooling dolts I’ve got. I don’t want any fool visionaries starving around here. You’re an egotist. You’re impertinent. You’re too sure of yourself. 20 years ago I’d have punched your face with the greatest of pleasure. You’re coming to work for me tomorrow morning at 9 o’clock.” –Henry Cameron

Roark refuses to decorate his buildings in classical styles, which he despises. Because of his difficulty in working with others, he has a lot of trouble getting assignments. As a last resort, he takes a job as a stonecutter in a quarry owned by the wealthy Francon family as a means to survive. He meets the heiress daughter, Dominique, but he never lets on to her that he is really an architect. Roark ultimately leaves the quarry when he gets a commission to build a high-rise apartment building. 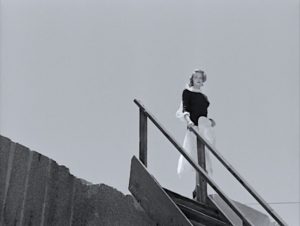 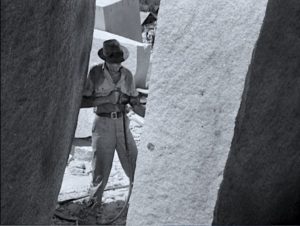 “No building is unimportant. I’ll build for any man who wants me, anywhere, so long as I build my way.” –Howard Roark

Howard Roark is a dark character; his own personal happiness has a very small role in his life. It seems that the most important thing is to get his buildings constructed. A “yellow” newspaper, The Banner, constantly criticizes his work, but Roark manages to continue designing for clients who understand and believe in his vision. 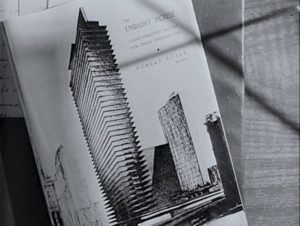 Dominique Francon, played by Patricia Neal, is the daughter of a rich and famous, very traditional architect. She has a job writing artistic criticism for The Banner. At the beginning of The Fountainhead she is engaged to Peter Keating, a classmate of Roark’s. He’s not very bright but he is a good smarmy politician around the office.

“I wish I had never seen….your building. It’s the things that we admire or want that enslave us, and I’m not easy to bring into submission.” –Dominique Francon

Dominique is difficult to figure. She seems afraid of letting out her passions. She’d rather not be near anything that is too beautiful since its hold on her would be too strong. When she sees Roark in the quarry, she seems to place him in this category. 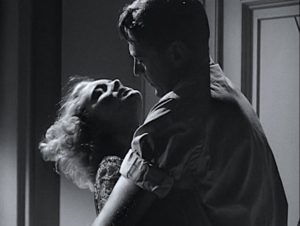 She has few scruples in the love and relationship department. She breaks off her engagement with Peter so that he can get a commission. She hits Roark in the face with a horsewhip, and after she falls in love with him, she won’t go near him. She marries Gail Wynand, the publisher of The Banner, even though she doesn’t love him or even seem to like him very much. 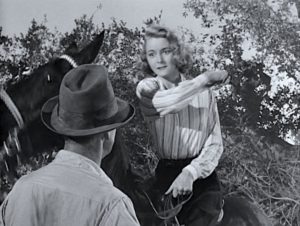 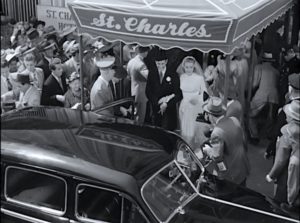 “You mean they’re being done all the time, but not talked about. I grant you that I’m behaving abominably. It’s extremely cruel to be honest.” –Gail Wynand

The Fountainhead was considered pretty scandalous when it was released, and this impression was probably fueled by the fact that Gary Cooper and Patricia Neal entered into a heated affair in real life that almost ended his marriage. When she hits him with the horsewhip, it’s her twisted way of inviting him to have his way with her, which he does, accompanied by very big music.

“There is no honest way to deal with people — we have no choice but to submit or rule them. I choose to rule them.” –Gail Wynand

Gail Wynand (Raymond Massey) became a rich and powerful man by his own wits. He rose from the poorest beginnings in the Hell’s Kitchen area of New York City. He owns the most powerful newspaper in the city, The Banner. He uses it to form public opinion and to keep things stirred up so that papers will sell. 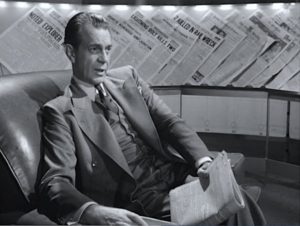 He launches a smear campaign against the first of Roark’s great buildings, just because it looks totally new and different. It’s nothing personal, he doesn’t even know Roark. Later he meets him, and they form a very close relationship. However poor Gail has no idea that his wife, Dominique, is in love with Roark. The philosophical conflict in the story is between objectivism and altruism. Howard Roark stands for being true to one’s self and following individual will. Ellsworth Toohey (played slimily by Robert Douglas) and Peter Keating are the spokesmen for subsumation of will, that an individual should submit to the desires of the masses. 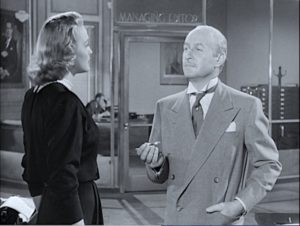 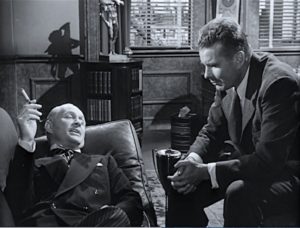 The Fountainhead is a big soap opera, with lots of dramatic music and melodramatic scenes between the characters. While watching, it was difficult not to wonder if Wright was as sexy, powerful, and alluring as the character played by Gary Cooper. And as the rich, artistic New Yorker Dominique, Patricia Neal gets to wear some great clothes (Dominique’s fear of the beautiful evidently did not extend to her wardrobe.) The most elegant ensemble is a strapless black evening dress with a sweetheart neckline — very décolleté — the edge of which is decorated with white fur, drawing the eye to the bust. She has a fabulous cape to wear over the dress, with white fur and a hood. 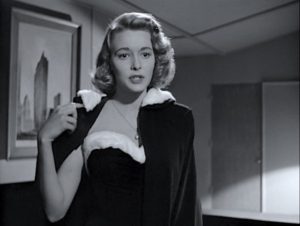 Get out your hankerchiefs and check out this movie for a fine performance by Raymond Massey; to see screen sizzle between Patricia Neal and Gary Cooper; to hear heroic architect talk; to see movie versions of the Guggenheim Museum, Fallingwater, and other beautiful Frank Lloyd Wright buildings.

Resource links for The Fountainhead