THE ST. VALENTINE’S DAY MASSACRE of members of Bugs Moran’s gang is one of the most notorious events in Chicago’s gangland history. As That Certain Woman, Bette Davis has to overcome her past as the widow of one of the massacre victims. Trying to become a respectable lady living down her former life as a gangster’s wife is great fodder for Bette Davis’ superior tearjerking skills.

Get out your handkerchiefs to enjoy 1937’s That Certain Woman, a dramatic story of a good woman’s struggle to get past her bad reputation. That Certain Woman (1937) begins on a rainy Valentine’s Day in Chicago, the fourth anniversary of the massacre of Bugs Moran’s gang in a garage. Two women board a double-decker bus to ride out the cemetery. As they approach Al Haines’ grave with their flowers, a photographer jumps out to snatch a picture. A friend who has been following the two women grabs the photographer and destroys the camera. 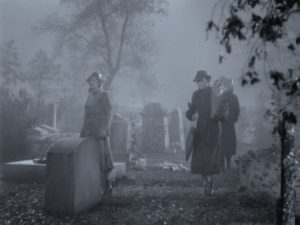 Why the big interest in two women visiting a dead gangster’s grave? Virgil Whitaker (Hugh O’Connell) is a newspaper man who sees a career-making chance for himself in the story. “Where are the gangsters and their molls now?” is a popular series in the papers. 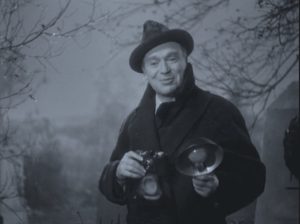 “Mary, why didn’t you say hello to Fred? It wouldn’t have hurt you. He looked so sad, poor tough old Freddy. –I’ve been through with guys like Fred for years. Nothing to do with them, not even speak to them. –That was all right when you first broke away. But after what you’ve made of yourself, you’re a lady, and ladies are polite to everybody.” –Amy and Mary

The two women, Amy (Mary Phillips) and Mary Donnell Haines (Bette Davis), have dropped out of sight since the massacre. Mary is Al Haines’ widow, that certain woman. Now she works as an executive assistant for the Rogers, Tilden, and French law firm and never speaks to her former gang associates. She’s made a lady of herself. 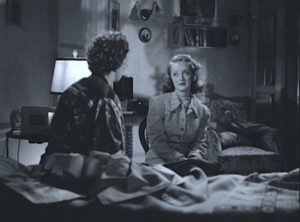 Unbeknownst to her, her boss, Lloyd Rogers (Ian Hunter), has known all along that she was a gangster’s widow. He tells Mary that he’s proud of her for going to night school and working so hard to change herself. He volunteers to help her with the problem of Virgil. 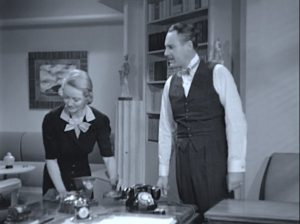 Lloyd treats Virgil to a lunch at his club and manages to kill the story on Mary’s past by suggesting a less sensational alternative. At the club, Lloyd runs into Jack Merrick (Henry Fonda), just back from Paris. Jack inquires about Mary, then calls her for a date. While in Paris he wrote letters to her, letting her know how besotted he is with her. Jack is the carefree son of a very rich, very conservative man. 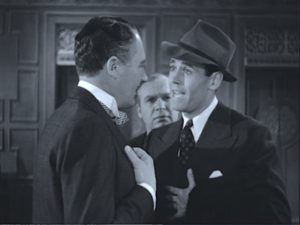 “Did Mr. Rogers tell you? He’s got me all fixed up to do a series of articles on businessmen, their habits and health for the McGulliver people. Say can he work fast, that boss of yours.” –Virgil

That evening, Mary goes to Harry Valko’s café. Harry (Ben Welden) is a friend from the old days who has also changed his ways. Mary brings him the news that Virgil has been stopped from chasing them. Jack meets her at the café, fresh from a tense dinner with his father. Mary explains to Jack that being anything but good friends is out of the question for them. She wants him to try to do real work instead of spending his time as a rich gadfly. 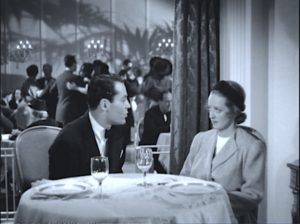 Jack goes to Lloyd about his feelings for Mary. Lloyd reveals the sordid details of Mary’s past. The next morning, Lloyd talks the situation over with Mary. Being very supportive of her, he encourages her to take a chance on finding happiness with Jack. He tells her he’s willing to let her go from the office, even though he completely depends on her. His faith gives her courage to elope with Jack. 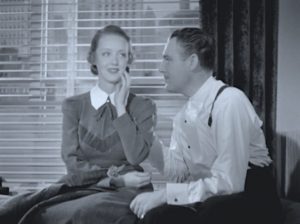 Jack’s father, John Merrick (Donald Crisp), with a doctor and a policeman in tow, arrives at the shabby hotel where Jack and Mary have taken rooms. Dad is very mean to Jack and wants to know the conditions to get him away from Mary. Mary comes down to meet Dad, who is horribly rude to her. He demands an annulment of the marriage. Dad has brought a police lieutenant with him to tell the story of Mary’s past arrest record. Mary begs Jack to leave the meeting with his Dad and go their own way. Jack wants to stay and convince his dad that the marriage is valid and important to him. Mary leaves alone and goes back to her old apartment. 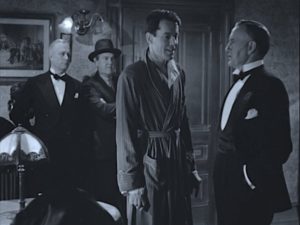 A year later, Mary and her friend Amy are living together with Mary’s baby boy. Virgil visits them with the news that Jack has married an heiress, Florence “Flip” Carson (Anita Louise), and has gone to France for an extended trip. Mary had waited all year for him to come looking for her and resume their marriage. Now her son will grow up without his father. 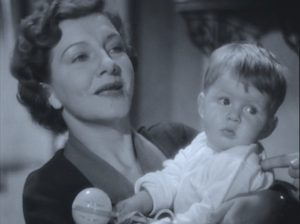 Soon after, Mary is devastated to hear further news of Jack. Jack and Flip have been in a terrible car accident in France and their recovery is uncertain. Once again, Lloyd jumps in to support her. He’s married, but he loves Mary and wants to do all he can for her. He sends her to White Sulphur Springs (The Greenbrier) to get over her grief for Jack.

“Yeah, I know something else too. –What’s that? –You’re falling for him at last. I knew you would. The day we moved in here, I knew it. I don’t see how you could help yourself, he’s been so decent. –You’re right, he is decent. He has everything, but that one thing right here in my heart. –Jack! –Mmm. I believe I’m like those unfortunate gals you read about in the dime novels. ‘She only loved once.’ –Dopes that’s what they are, dopes!” –Amy and Mary

Time goes on and Mary’s son is celebrating his fourth birthday. Lloyd is quite ill, but Mary cannot visit him out of deference to his wife. Lloyd’s law partner comes to Mary when Lloyd runs away. Everyone thinks he is hiding with Mary, and the man is quite insulting to Mary. Eventually, Lloyd does make his way to Mary’s apartment, and he ends up dying there, with his wife present, a very moving scene. Photographers, hot on the scent of a story once Lloyd disappears, manage to get a photo of the two women together and make a scandal of it in the papers. Lloyd has named Mary as his main beneficiary in his will, and the papers print pictures of Mary’s son and raise questions about his paternity. 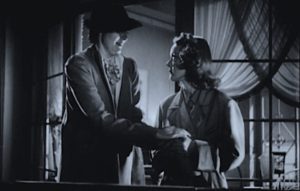 Mary decides she must leave Chicago, but as she is preparing, Jack shows up and offers to help her. It turns out that his wife Flip has never fully recovered from the accident and is still in a wheelchair. She can’t have a baby and Jack offers to adopt Mary’s son. Mary loses her temper and reveals that little Jackie is his son, not Lloyd’s. She insists that they will continue to go their separate ways. 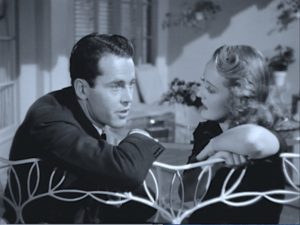 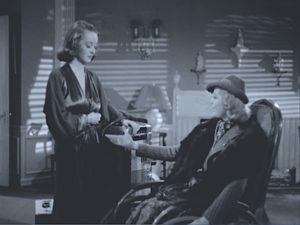 There’s lots more drama as Jack decides between Mary and Flip, mean John Merrick messes with Mary’s life again, and Mary has to decide whether to let everyone else tell her what to do or decide her own fate and her son’s. Bette, dressed in great outfits by Orry-Kelly, is always the master of every scene in That Certain Woman, her eyes and low voice commanding attention. Bette is so strong, it’s hard to believe that Henry Fonda is her man. It’s a good story, with surprises at every turn, and you just want the world to let Bette alone! The tears will flow as you watch Bette hold hers back.

Resource links for That Certain Woman