The volcano eruption in Hawaii is a great learning opportunity for earth science, chemistry, and the power grid. Humans have been observing the power of the earth since the beginning of time and eruptions are still unpredictable. However, we have learned enough about volcanoes to collect data and try to explain what is happening.

Disclaimer: All information provided on this site is for entertainment and education purposes only. Using any information from casabouquet.com is at your own risk.

These lesson plans include making models, making chemical reactions, and learning about generating power with geothermal energy. The 2018 event at Kilauea volcano and lower Puna is full of topics for classroom exploration: earth science with volcano, earthquakes, and tsunamis; chemistry with the gases and other substances being produced; and energy with the geothermal power plant. Safety during a natural disaster is another compelling topic. 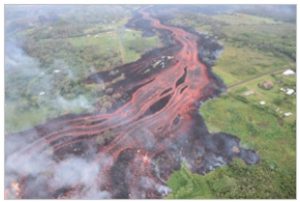 Lesson plans include the study of how lava moves, magma and dikes, and volcano characteristics. 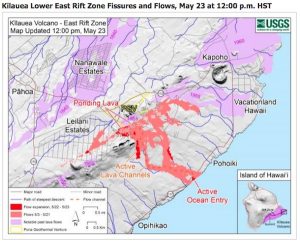 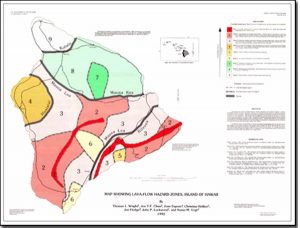 Students can learn about the different forms of power plants and their similarities. Puna Geothermal Venture near Pahoa on Hawaii island generated between ¼ and 1/3 of the electrical power for the island using binary cycle generation.

Hazards include the SO2 gas emanating from the lava erupting from the fissures, HCl coming from the lava hitting the ocean, methane gas from vegetation covered with lava, and H2S gas which could be released from the wells at the geothermal plant as it is inundated with lava. Terms to explore are vog (volcanic air pollution made of fine particles of sulfates), volcanic ash (small rock and glass particles), and laze (steam plume with hydrochloric acid and tiny needles of glass). 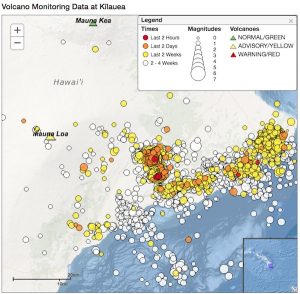 An explanation of methane and the blue flames from geologist Janet Babb:

“With lava now advancing through lush vegetation along Kīlauea Volcano’s lower East Rift Zone, these explosions have become a concern. If you approach a lava flow that’s encroaching on vegetation, you risk being greeted by the blast of an explosion.” Read more here! 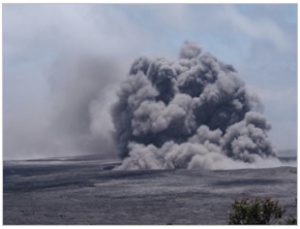 What is the science?

Kīlauea is a shield volcano. The crater on the summit is called Halema’uma’u which is over a supply of magma. In the 2018 event, Halema’uma’u lava lake dropped down over 1000 feet below the water table level. The rock walls collapsed, causing up to 3 eruptions per day of a huge steam and ash cloud at the beginning, in the third month in a rhythm of 1 big collapse earthquake per day with 20 – 40 hours between collapses. Further downslope is Pu’u ‘Ō’ō crater which formed during the 1983 event. The lava has drained out of the crater with a collapse of walls.

More than 20 fissures have opened in the earth south of the town of Pahoa in the Puna region, over 15 miles away from the summit. At first the lava was “old” lava, stored under the earth since the 1955 event. Then the lava changed to lava from Pu’u ‘Ō’ō, then eventually a mixture of Pu’u ‘Ō’ō and Halema’uma’u lava. Geologists use the chemical composition and temperature of the lava to identify its source. The lava takes two forms, pāhoehoe and ʻaʻā. Fissure 8 formed a cone and pumped 6 to 9 million cubic meters of lava per day (about 6,600,000 gallons/hour!) into a river of lava that entered the ocean at Kapoho, about 8 miles away. Kapoho Bay is gone and new land was formed by the lava (over 875 acres as of 08.21.18). A new ocean entry July 11 inundated Kalea destroying the warm ponds at Ahalanui State Park, beloved Kua O Ka La school, and Secrets surf spot. August 2 a 5.4 magnitude earthquake and collapse at the summit signaled a change in the historic eruption, with the lava river crusting over by August 4 and ocean entries ending August 21. 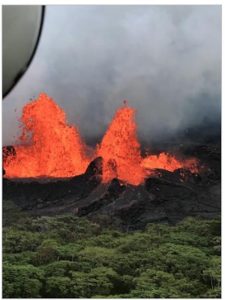 I recommend taking some time to learn about the Hawaiian creation story, the Kumulipo. The goddess Pele is such a key figure and her power (mana) is an important cultural part of an eruption event.

Pele Searches for a Home

Pele searches for a home from ‘Ōiwi TV educational curriculum

I’ll be looking for comments below, or contact me at lisa [at] casabouquet[dot]com.