Pirate science activities give a learning anchor to so much content! Here’s a harbor for ye to try six pirate science experiments that promote learning in many science topics .

Teaching with a theme works well with organizing science lessons into stations. When you don’t have enough resources for every group of children to do the same lab, stations can be the solution. Using stations is also a great differentiation technique. See Part 1 for my tips for organizing station labs. 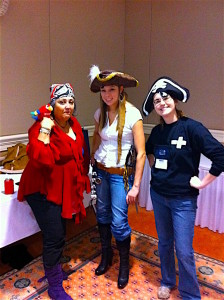 Me mateys Kelly and Jen love swashbucklers as much as I do. This is a series of science ideas for pirate theme we put together. Here’s some of our pirate inspiration: Treasure Island, Peter Pan, Pirates of Penzance, Pirates of the Carribean, The Pirate Queen, and Jake and the Neverland Pirates.