As Picnic (1956) opens, a young man (William Holden) rides into town on a boxcar in the early morning. He’s dusty and dirty and he cleans himself up in the mill race. He wanders through the backyards and picks a back door to knock on. Mrs. Potts offers him food, after telling him that nobody works on Labor Day. 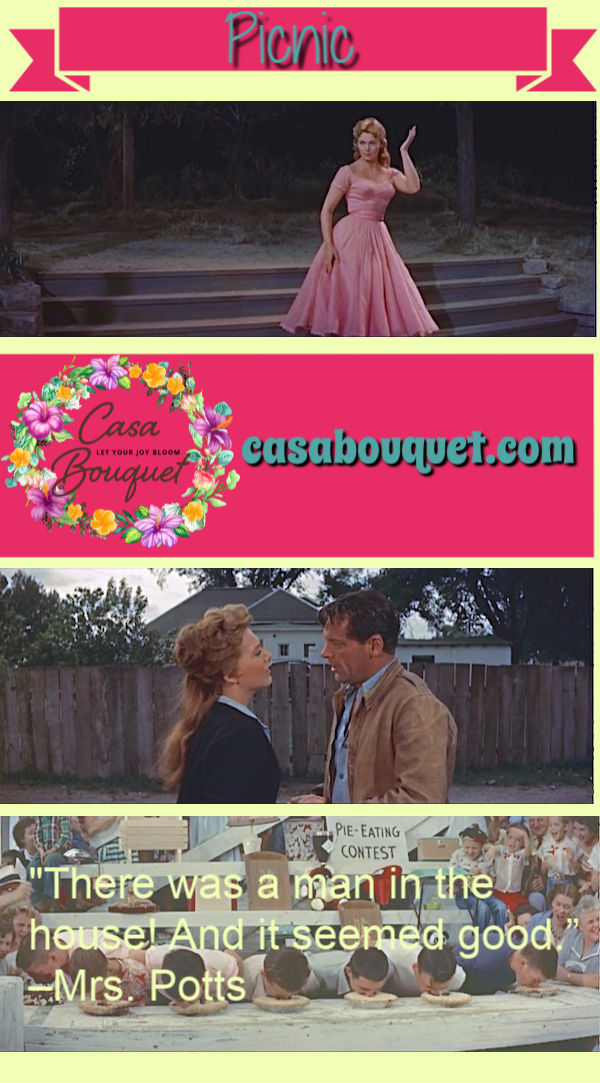 Next door, Millie (Susan Strasberg), a young teenager is smoking and reading “The Heart is a Lonely Hunter.” Madge (Kim Novak), the older sister is hanging out the window drying her hair. The mom, Flo Owens, (Betty Field) is peeling hard boiled eggs and Rosemary (Rosalind Russell), the schoolteacher boarder, talks about her hopes for romance.

Hal, the young man, meets the family when he helps to stop the paperboy from hitting on Madge. Hal wants to find Madge’s boyfriend, Alan Benson (Cliff Robertson). Alan’s father is the richest man in town and lives in a mansion. Hal and Alan are college fraternity brothers.

“Pretty girl doesn’t have long, just a few years. Then she’s the equal of kings. She can walk out of a shanty like this and live in a palace. If she loses her chance when she’s young, she might as well throw all her prettiness away.” –Mrs. Owens

Mrs. Owens is making a beautiful dress for Madge and worrying about her getting married. Madge calls Millie a goon and it’s clear the jealousy between the two sisters is the basis of their relationship. Millie is smart and has won a full scholarship to college while 19-year-old Madge is beautiful and works at the dime store.

Hal and Alan visit the grain elevators. Men are working on Labor Day because there is a back log of wheat. Hal asks for a job. He doesn’t seem to have the patience to start at the bottom.

“Maybe something in a nice office where I can wear a tie and have a sweet little secretary and talk over the telephone about enterprises and things. I gotta get someplace in this world, I just gotta!” –Hal

Everyone meets at the Owens’ home to get ready for the picnic. There’s tons of food, drinks in a tub, layer cakes. Howard (Arthur O’Connell) arrives to take Rosemary to the picnic. As they all drive to the picnic, liquor is the main topic. Mrs. Owen is afraid Hal will drink while he’s escorting Millie and Rosemary is afraid she’ll lose her job if anyone finds out she is drinking with Howard.

The picnic at the riverside park

The picnic is a huge affair with games for all ages, music, and competitions. People talk of the future and the past.

“Flo, you’ll never know what it’s meant to have you next door to me, watching your two girls grow up. It’s made it easier.”—Mrs. Potts

Madge gets chosen as Queen of Neewollah. She floats down the river in a swan boat with a crown and an armful of roses. Everyone has a strong emotional reaction to her beauty. The band plays Moonglow. Hal tries to teach Millie to dance to it, but Madge catches on right away. I can’t show you in still pictures how this scene plays out, you need to watch how Madge dances!

With Rosemary, Howard, and Hal all high from drinking, the drama gets pretty intense. I’m not sure any of the characters are living the life they long for. Madge doesn’t want the country club life her mother dreams of for her. Millie wants to have a love life while staying true to her ambitions. Rosemary longs to be married and leave her dreary spinster school teacher life.

“I got so used to things as they were. Everything so prim, the geranium in the window, the smell of Mama’s medicines, and then he walked in. And it was different. He clomped through the place like he was still outdoors. There was a man in the house! And it seemed good.” –Mrs. Potts

The scenes are set so beautifully. Filmed on location in several Kansas towns, the lower class houses near the tracks, the lake, the park with the bandstand, the Chinese lanterns over the dance floor, all tell part of the story.

William Inge wrote beautiful plays full of longing starting in the 1940s. His play Picnic won the Pulitzer Prize. He’s been called the Bard of the Midwest.

One of the earliest helicopter shots in the movies!