Palm Beach Story (1942) gets off to a madcap start during the opening credits! A maid faints. A pastor paces and looks at his watch. A groom and best man hurry into a taxi. A beautiful woman is tied up in a closet. A bride hails a taxi. The wedding begins with titles “and they lived happily ever after. Or did they?”

Apartment manager Franklin Pangborn shows a couple from Texas a Park Avenue apartment. The husband is the deaf and crotchety Wienie King. They enter the apartment, but the tenant (Claudette Colbert) is still there in her robe. 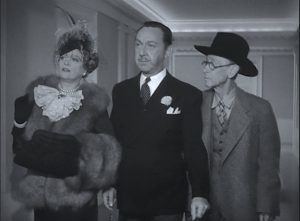 “Anyway, I’d be too old for ya. Cold are the hands of time that creep along relentlessly destroying slowly but without pity that which yesterday was young. Alone our memories resist this disintegration and grow more lovely with the passing years. Heh, that’s hard to say with false teeth!” –Wienie King 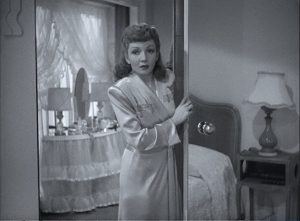 The Wienie King likes the woman very much and offers to get her out of debt. He gives her $700 and says he’s “cheesy” with money and it’ll be a good joke on his wife and the apartment manager. (This would be over $10,000 in today’s money!)

Meanwhile, Tom Jeffers (Joel McCrea), her husband, is at his office trying to pitch his design for a moveable landing field to an investor. It’s a big stretchy net that hangs over the city! 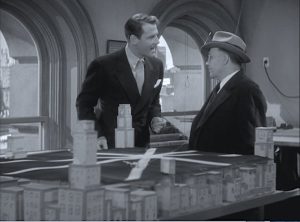 Gerry has a hard time explaining to Tom how she got the money to pay the rent, the grocer, and everyone else they owe. She figures he is better off divorced from her.

“I’m no good for you, darling, I don’t mean I’m not good for somebody, but I can’t cook or sew or whip up a little dress out of last year’s window curtains.” –Gerry

At dinner Tom and Gerry start planning how it will be when she is like a sister to him. She plans on helping him getting ahead by using her feminine wiles with rich industrialists. She tries to convince them both that they only have admiration and respect for each other, but it’s clear they still have a strong spark between them. 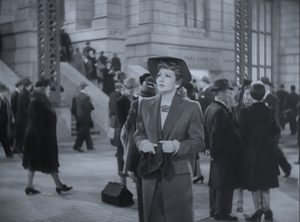 In the morning she tries to leave him anyway, but Tom manages to get a policeman to stop her. While Tom argues that she can’t go anywhere without money, she stops a cab and asks the cabbie (Frank Faylen) for the best place to get a divorce.

“Well most people go to Reno, Nevada, but for my money, it’s Palm Beach. This time of the year you got the track, you got the ocean, you got the palm trees. Three months, you leave from Penn Station.” –cabbie

Once at Penn Station, Gerry hatches a plan to get on the Florida Special. She attracts the attention of most of the members of the Ale and Quail hunting club who are boarding the train. The millionaires vote and invite her to be their mascot on their private train car going to Savannah. 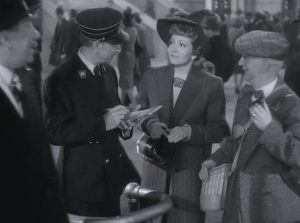 Tom meets the Wienie King back at the apartment. The old man urges him to fly down to Florida to bring Gerry back, and gives him the money to do it. 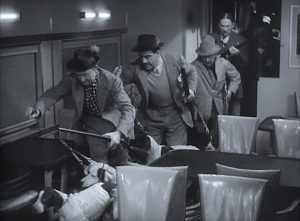 The hunt club members drink a lot, sing, and target shoot inside the train. Gerry runs away from them and looks for an empty berth in the Pullman car. She meets John D. Hackensacker (Rudy Vallée) by stepping on him while she’s climbing into an upper berth. 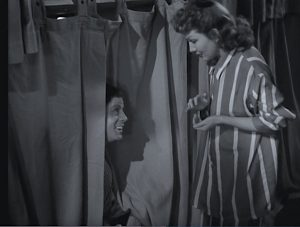 What a crazy situation! The conductor leaves the private car and its rowdy club members behind, along with Gerry’s clothes and ticket. Now she’s on the regular train, wearing a millionaire’s pajamas.

John helps her. It turns out he is very tight with his money. He won’t buy her a train ticket, but he offers to take her from Jacksonville to Palm Beach on his boat. He spends a huge amount of money on clothes for her. Claudette Colbert has the best facial expressions during this! 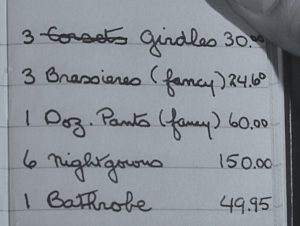 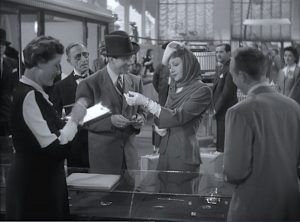 On the yacht, The Erl King, Gerry learns that John is the richest man in America and he’s going to stay with his sister in Palm Beach. She’s Princess Maude Centimillia (Mary Astor) and has been divorced three times and annulled twice. Gerry starts telling John about the $99,000 Tom needs to build his airport. 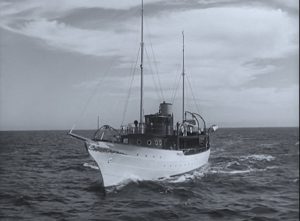 Tom hunts Gerry down and meets the yacht at Palm Beach. The Princess invites her to stay at her house. At the dock, Gerry introduces Tom as her brother, Captain McGlue. 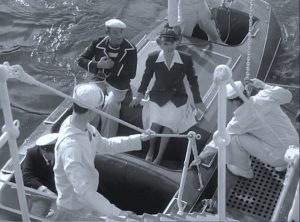 “How wonderful it is meeting a silent American again. All my husbands were foreigners and such chatterboxes. I could hardly get a word in edgeways!” –Maude

“In the second place, you don’t marry somebody you just met the day before. At least, I don’t. –But that’s the only way, dear. If you get to know too much about them, you’d never marry them. I’d marry Captain McGlue tomorrow even with that name.” –John and Maude

John and Maude start courting Tom and Gerry and get very enthusiastic about the airport invention. John arranges for a whole orchestra below Gerry’s balcony to sing “Goodnight Sweetheart.” But Tom and Gerry are still in love. Can there be a happy ending where everyone gets what they want?

The sets are wonderful in the Palm Beach Story. I love the elegant two-story New York apartment, the sleek train, and the beautiful Palm Beach mansion with elegant marble motifs and huge rooms. Claudette Colbert and Mary Astor are stunning in beautiful sparking evening gowns and jewels from Irene. 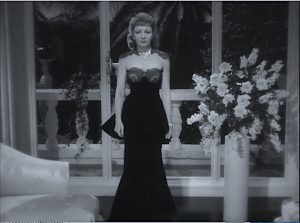 Written and directed by Preston Sturges, Palm Beach Story will have you wondering why they don’t make them like this anymore. A crazy story, loveable characters, and sparkling dialogue make this a wedding story to enjoy.