Metropolis (1927) is a silent German film that is a masterpiece of art direction and science fiction with a strong philosophy. The film begins with

“The mediator between brain and hands must be the heart!” 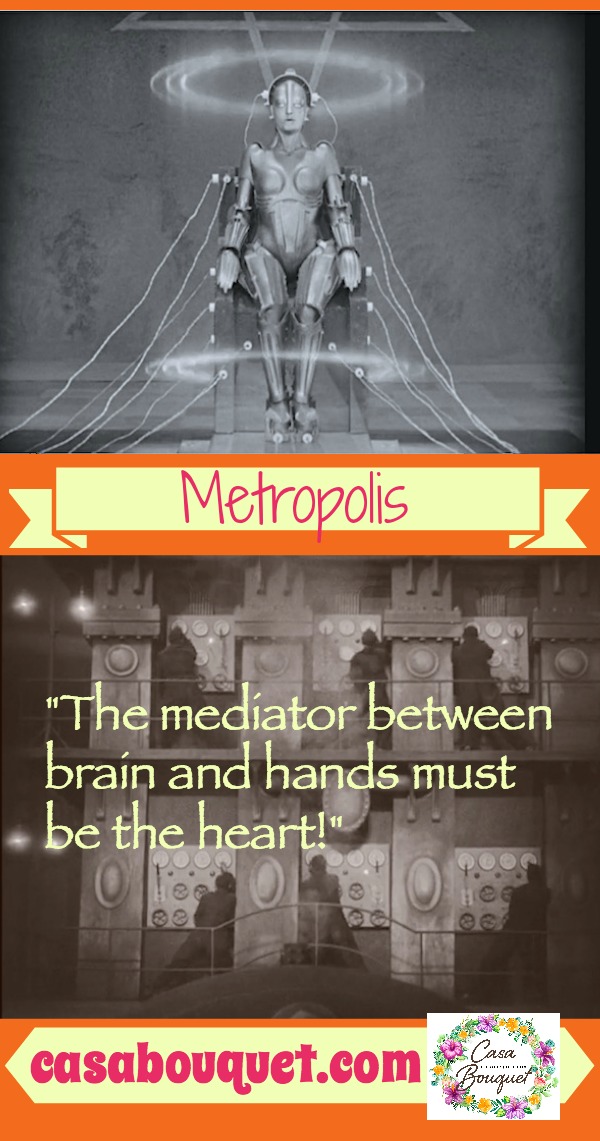 The story of Metropolis takes place in 2026. We see machinery grinding away and the hands of a clock ticking towards shift change. Clocks are a major visual theme. 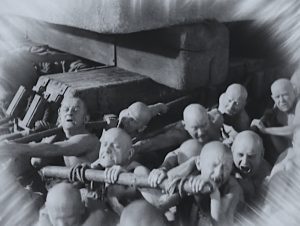 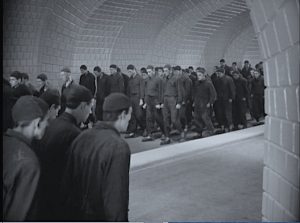 Nameless workers trudge through underground tunnels. Their city is deep below the ground while the elite learn and play in majestic buildings above. Young women dress up and live to entertain Freder, son of the master of Metropolis, Fredersen. A Master of Ceremonies takes care that everything is perfect. The world of the elite will remind you of the Hunger Games. 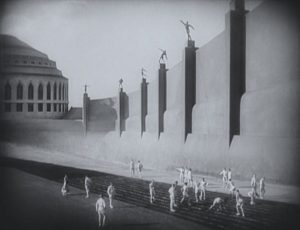 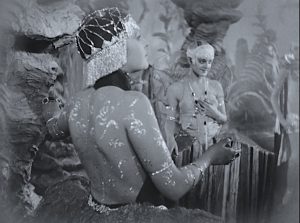 Maria comes out above ground with a crowd of poor children. She tells them to look at their brothers, looking like a pilgrim in her plain frock. Maria and the children (urchins?) are hustled back underground by the guards. 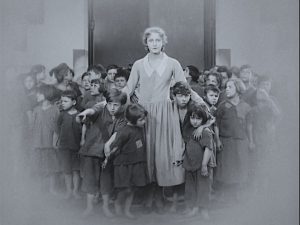 Freder decides to go see where she came from. He is stunned to see the huge machines and thousands of workers that make Metropolis possible. An explosion causes men to fly through the air. Many are burned and hurt badly. Moloch the monster appears in the ruins. Horrified, Freder watches as men are fed to the machine monster. Production starts up again as the dead are carried away. 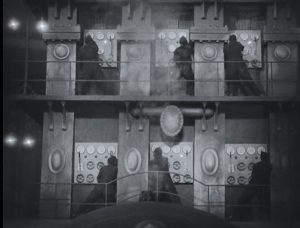 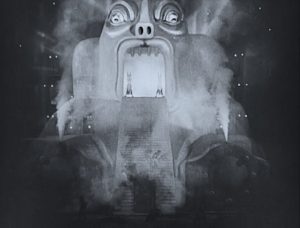 Freder rushes to his father’s office, the Master. Joh Fredersen is angry that he hears about explosion from his son, not his chief manager, Josaphat. Father is a very scary dude!

“What were you doing in the machine halls, Freder? –I wanted to look into the faces of the people whose little children are my brothers, my sisters…” Joh and Freder Fredersen 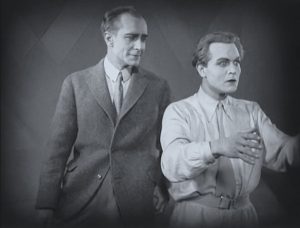 Freder can’t handle what he has seen and his father’s attitude towards the workers. Grot, the foreman, brings Federsen plans he has found in the pockets of two men involved in the explosion. Josaphat starts sweating bullets, and he is fired.

“Father, do you know what it means to be dismissed by you? It means, go below! Father! Go below! Into the depths!” –Freder

Freder hatches a plan to save Josaphat and do something about the workers in the depths. Meanwhile, Fredersen brings in the Thin Man to spy on Freder. Freder takes over a machine for one of the workers, Georgy. He dresses him in his clothes and gives him his driver and sends him to Josaphat’s house to wait for him. Georgy is enticed by the beautiful world above ground. He sees a flyer for the nightclub Yoshiwara, and he’s got all of Freder’s money to party with!

Rotwang, the inventor, lives in a little house that has survived all the modern building around it. Joh Fredersen visits him, and finds a huge statue of Hel, his deceased wife. The plinth reads

Rotwang flies into a fury when he sees Joh. Rotwang has lost a hand recreating an android robot of Hel and he is definitely a mad scientist. Joh asks Rotwang to look at the plans found in the workers’ clothes. Rotwang reveals that there are 2000-year-old catacombs below the city. 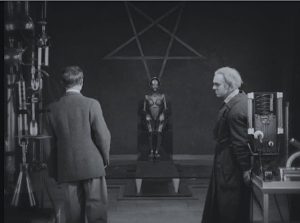 An exhausted Freder joins the workers at the end of shift. They trek down into the catacombs for a meeting. Maria preaches to them under candles and crosses. She tells them the story of the Tower of Babel. Freder is completely spellbound by her.

Meanwhile his father watches this peaceful inspirational meeting with Rotwang from a secret passage. Joh asks Rotwang to make the robot look like Maria. He has a plan to use the robot-Maria to betray the movement. Rotwang chases Maria through the tunnels and traps her in his house.

While Freder is at the cathedral looking for Maria, Georgy is leaving the Yoshiwara club. The Thin Man is waiting in the car and he gets Josaphat’s address from him. The Thin Man sends Georgy back to his job underground. The Thin Man is a very threatening figure. 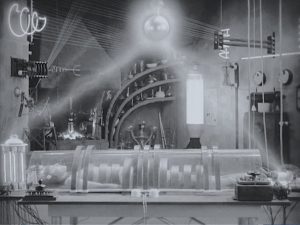 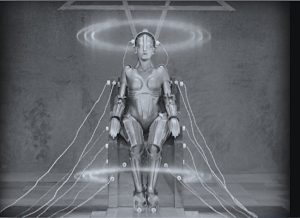 Freder hears Maria screaming in Rotwang’s house. He gets trapped in a maze of doors and doesn’t get to Maria before Rotwang uses her for his evil robot.

“I want you to visit those in the depths, in order to destroy the work of the woman in whose image you were created!” –Joh

Joh has a big party with the elite men (in 2026, they are still wearing 19thcentury white tie!). The anti-Maria rises up out of a smoking urn to do a little hootchie-coochie dance and completely entrance the men. 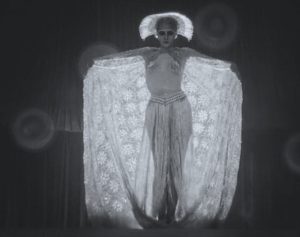 Freder has had a complete breakdown and is having delirium in his bedroom. He sees the seven deadly sins from the cathedral come to life. He’s such a sensitive soul, he reads Revelations while he’s recovering. 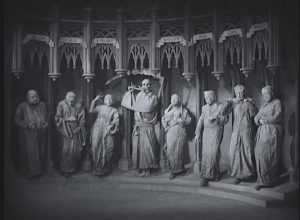 Josaphat comes to his house, dressed as a worker. He explains that the elite men are fighting and killing each other over anti-Maria, and she leads wild nights in the Yoshiwara club. Along with her gig at Yoshiwara, anti-Maria also preaches to the workers in the underground chapel, inciting them to revolt. 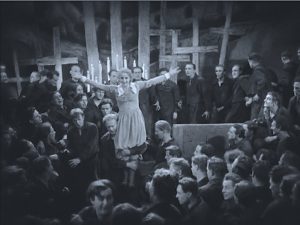 Fritz Lang created an amazing dystopian world with the settings in the underground (the tunnels, the machines, Maria’s chapel) and the metropolis above (Yoshiwara Club, the cathedral, Rotwang’s house, the majestic buildings and modernistic transportation). The way people can be swayed and become a mob is dynamically portrayed and the philosophy of brotherhood is memorable. 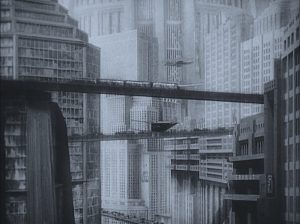 The film was originally about 2 ½ hours long. It was cut after its initial release, leaving director Fritz Lang to mourn his creation. An old original copy was found in Argentina in 2008 and was used to restore the film. When looking for the film today, look for the longer complete version with its original score. But for fun, you might enjoy the 1984 version with the Giorgio Moroder’s digital music.