You are here: Home / Culture / Little House on the Prairie and Laura Ingalls Wilder

My sweet friend, Amy, loves to read and write. She is an educational consultant and has a background in English Language Arts. Amy has agreed to share one of her favorite TV and novel series Little House on the Prairie.

Now, here’s Amy to share some Little House background with us:

Like many women my age, I read and loved the Little House series as a child, and grew up watching the television adaptation. When I was pregnant with my first child, my dear friend Lisa gave me the entire TV series on DVD; thanks to her foresight, the Ingalls family kept me company during many of my first child’s sleepless nights. Since then, I’ve read the series to both of my children, and hope that we can encourage other families to do the same—these are books that will grow with you! 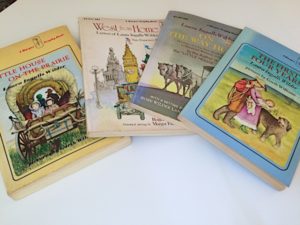 In 1925, the Wilder family of Mansfield Missouri boasted a famous world famous writer, but not the one today’s readers might imagine: Rose Lane Wilder, a journalist and travel writer, and the biographer of Herbert Hoover. Her mother, Laura, a tiny woman with a crown of thick white hair, was also a published writer with a modest local reputation; the author of a column in the Missouri Ruralist, writing primarily about farming techniques and chicken husbandry. The daughter of Charles Ingalls and Caroline Quiner, Laura Ingalls Wilder had labored all her life with her hands, wresting a living from the soil alongside husband Almanzo. The couple spent decades toiling to make their Missouri apple farm productive and by the end of the 1920s, they had achieved a level of financial stability. Now, perhaps inspired by her daughter’s success, Wilder wanted more. 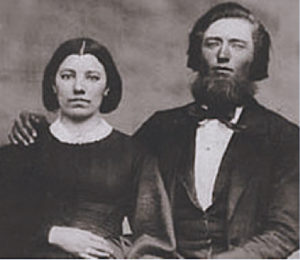 Charles and Caroline Quiner Ingalls circa 1860

The devastating stock market crash of 1929 provided additional financial impetus for a new venture. This time, Wilder, more than sixty years old, the daughter of a footloose pioneer, turned to the stories of her childhood to provide for the family. Prodded by her daughter Rose, she began first by sketching out her autobiography in a manuscript that would eventually be published as Pioneer Girl, many years later. An expanded and heavily revised version of the autobiography was published in 1932 as Little House in the Big Woods, the story of Wilder’s early childhood years in Wisconsin. The character of Laura is born into a little cabin populated by Pa, Ma, and sisters Mary and Baby Carrie. 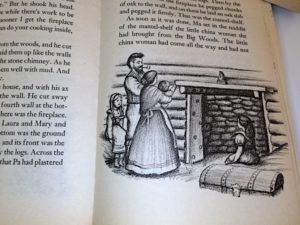 “Once upon a time, sixty years ago, a little girl lived in the Big Woods of Wisconsin, in a little gray house made of logs…”

Readers were immediately delighted with the story and clamored for more. In mining her experiences for material, Wilder traveled further back in time for her next publication. The second book, Little House on the Prairie, actually reflects events that occurred before the Big Woods years, when Laura was only three years old, instead of five, as described in the fictional account. The book relied on family stories and traditions, not on her own memories; the family would, in fact, travel back to Wisconsin to resume their old home before setting out again for a new start in the west, as described in On the Banks of Plum Creek. (Farmer Boy, third in the series, details Almanzo Wilder’s childhood—readers will be interested to contrast the material abundance of Almanzo’s settled farm life with the Ingalls’ pioneer lifestyle!) 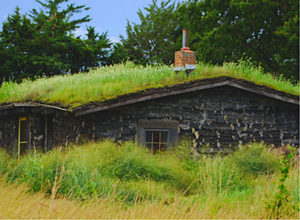 Plum Creek, set in the town of Walnut Grove, Minnesota, introduces the setting and characters that fans of the Little House television series are most familiar with. The snobbish Nellie Olsen, a character based on a composite of actual individuals, makes her appearance, and the conflict between the town and the country (introduced in the first book) becomes more carefully developed. Laura and her sister Mary start school. The book also develops an important conflict that will dominate much of the rest of the series—man versus nature. Pa battles a literal plague of locusts bent on destroying his wheat crop. In the end, the family emerges destitute but intact, determined to succeed.

However, By the Shores of Silver Lake finds the family in despair. Sickness (probably viral encephalitis) has left Mary blind, and the family’s finances are sapped—the crops have failed and the family is in debt. Miraculously, Pa’s sister Docia appears with an offer of a steady job with the railroad, saving the day. Thus the family moves west once more—across the border to the Dakota Territory, where Pa files for a homestead claim and the Ingalls family helps construct the town of De Smet, where Pa and Ma will settle permanently. 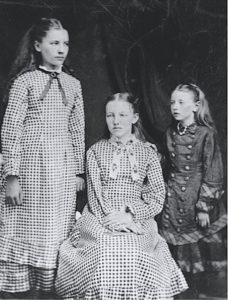 “Laura felt a warmth inside her. It was very small, but it was strong. It was steady, like a tiny light in the dark, and it burned very low but no winds could make it flicker because it would not give up.”

The Long Winter, the next book in the series, is perhaps the most cohesively and dramatically constructed, from a narrative point of view. It opens with the ominous prediction of a Native American who comes to town to warn the white settlers that an exceptionally hard winter (1880-81) is coming. Filled with foreboding, Pa moved the family into town for the winter. Nearly all of the book is set within the dark and frigid house in town, as the family coped with the reality of dwindling supplies and the fear of starvation. Almanzo Wilder, first glimpsed in By the Shores of Silver Lake, emerges as a hero who saves both Laura’s family, as well as the whole town, by venturing across the prairie to find wheat. Once again, the family emerges shaken but intact, still able to find hope for the future.

“If enough people think of a thing and work hard enough at it, I guess it’s pretty nearly bound to happen, wind and weather permitting…”

The next two books, Little Town on the Prairie and These Happy Golden Years, focus primarily on Laura’s relationships with friends and with Almanzo, and on her growing independence as a wage earner, working as a teacher, seamstress, and companion. Nellie Olsen reappears and locks horns with Laura once again; once again Laura emerges triumphant, winning scholarly success and her man.

The First Four Years, published posthumously, chronicle the early years of Laura and Almanzo’s marriage, including the birth of Rose and the death of Laura’s only other child, a boy. The book ends with the collapse of their farm, yet—like the other books—it ends with a relocation and hope for the future. 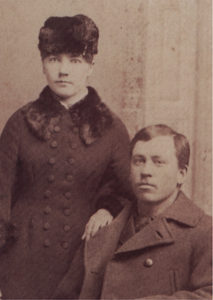 Laura and Almanzo Wilder, circa 1886

Wilder’s books have been continuously in print since their original publication, beloved by generations of readers. The characters and their stories are so familiar that many readers assume that the books are strictly accurate, and are often surprised to find that the books reflect a carefully honed version of events. Yet, perhaps nobody should be surprised that the strong-willed Laura grew up into a storyteller like Pa, one who was capable of both providing and withholding truth.

“All I have told is true, but it is not the whole truth….” 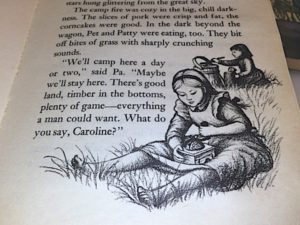 In many cases Wilder’s version of events appeared to have been toned down and sanitized—made less rather than more dramatic than the real version. For example, two of their nearest neighbors in Kansas were murdered by the Benders, a notorious family of serial killers. Ma’s hatred of Indians, difficult to understand within the context of the novels, is perhaps explained by the Wisconsin Osage massacres and the Dakota Wars of the 1860s, bloody conflicts more relevant to the Ingalls family than the distant Civil War, which seems to have had minimal impact on their lives.

Similarly, one of the most traumatic events in the lives of the Ingalls family, the birth and death of Laura’s baby brother Freddy, was omitted entirely, as was the family’s disastrous sojourn as hotel-keepers in Burr Oak, Iowa, an undertaking which ended in a humiliating return to Walnut Grove—a journey begun under cover of darkness as Charles Ingalls fled creditors who were about to seize his last precious asset, his horses.

Wilder’s life was more disrupted and more precarious than her fictionalized accounts allow the reader to know; at the same time, Wilder consistently displays a gift for making the historical personal. For example, while readers of Plum Creek do experience the devastation of the locust plague of 1875 (a well-documented historical phenomenon), readers are more worried about Pa’s boots than about the thousands of farm families who were displaced by the event.

Yet some events were altered for dramatic flair and to enhance the theme of bootstrap individualism—for example, though the family surely did save to send Mary to college, her actual tuition was paid for by the Dakota Territorial Legislature. Similarly, the beloved character of Mr. Edwards was an invention, a composite of many individuals, whose appearances in the novels interject a theme of optimism and a spirit of adventure. The family’s actual movements reflect less the theme of western progress and “Manifest Destiny” than the ebb and flow of migratory animals, pulled by circumstance and season to both new and familiar territory.

The Ingalls family arguably never enjoyed again the financial security and abundance that they experienced in the Big Woods of Wisconsin; yet the narrator of the Little House series will never let us doubt that there is always hope, and that anything is possible with hard work and perseverance.

“….She was glad that the cosy house, and Pa and Ma and the firelight and the music, were now. They could not be forgotten, she thought, because now is now. It can never be a long time ago.”

Despite the differences between the historical truth and fictional accounts provided by Wilder, the emotional reality of the novels is rendered with great authenticity. The enduring tensions of the novels, between the outdoorsy Laura and homebody Mary, between peaceful home and the chaotic outside world, the tension experienced by a Daddy’s girl who still seeks her mother’s approval, seem very real indeed.

In the end, Laura and Almanzo leave Ma and Pa, and strike out on their own, experiencing both failure and success, ultimately providing a launching pad for their talented daughter Rose. In turn, Rose would remember the stories she heard as a child, stories about a long-gone era of covered wagons, sunbonnets, and panther-filled woods, stories passed down from the footloose Pa to his little Half-Pint, and from the grown mother to her writer child who encouraged the mother to tell us all a story, just one more story, about the world of “used to be.” 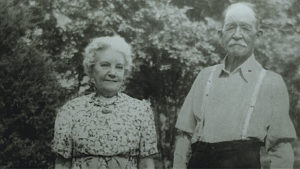 Laura and Almanzo Wilder, circa 1886 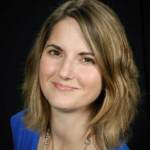 “Hey, friends! I’m Amy Overbay and I am a mom and an education consultant. I live in Lincoln County (north of Charlotte), in a house tucked into the trees. I love working with church youth programs, reading and writing, our naughty dog Lucy, and family time. I especially love good stories and history.”

Thanks for sharing your love of Little House with us, Amy!