You are here: Home / Culture / You Were Never Lovelier: Lisa’s Home Bijou

In You Were Never Lovelier (1942), Rita Hayworth plays a Buenos Aires princess in the style of “Taming of the Shrew.” Margarita Cansino was a dark-haired beauty who first was noticed as her father Eduardo’s ballroom dance partner. In her late teens she made a few movie appearances (Charlie Chan in Egypt). Then she dyed her hair red and became a star. We know Ms. Cansino better as Rita Hayworth, who helped bring a real Latin flavor to the movies.

You Were Never Lovelier focuses on how the four Acuña sisters get to the altar with the men they love. The girls live a privileged and generally happy existence in Buenos Aires with their mother and strict father, Eduardo Acuña (Adolphe Menjou). Papa Acuña owns the nicest hotel in town and wants only the best for his daughters. He has laid down an inflexible rule for his hijas (daughters): the girls must marry in order of age, from eldest to youngest.

“It’s my invariable rule to distrust women’s taste in clothes. –That’s why he asked me to come by. …– Now you know as well as I do that women dress for one another and not for men. Delfina’s mom decked her out in fluff when I married her and she’s been decked out in fluff ever since. Does your son like fluff?” –Eduardo and María Castro 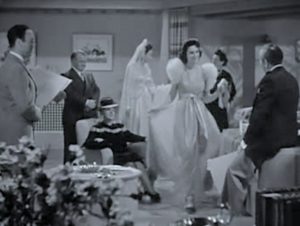 Papa’s rule works fine with his eldest daughter. She falls in love with an acceptable groom whom she marries in a beautiful ceremony in the Acuña home. The bride wears white satin with a coronet to hold her veil. Her sisters, as bridesmaids, are a vision in chiffon and satin gowns with dropped waists and a bow at the bust, capped off by sweetheart picture hats. Each carries an armful of calla lilies. The two youngest sisters see these wedding festivities as the beginning of their chance at happiness. They both have nuptial candidates lined up, but in order for them to get married, the Number Two sister, María (Rita Hayworth) has to march down the aisle first. 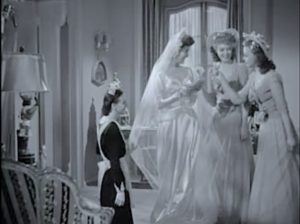 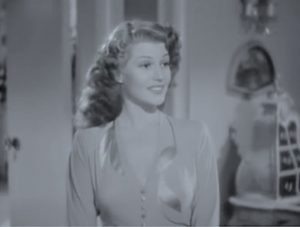 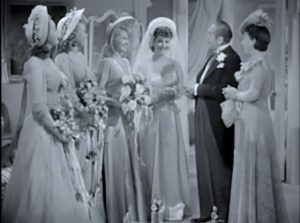 “Oh but you have to be! Papa made it very clear that we can’t get married until after you do. –He says it’s our family tradition that the girls have to be disposed of, one, two, three, four. –And you’ll be the oldest now! –Oh Papa’ll get over that silly tradition. –No he won’t. Papa never gets over anything!” –Cecy, Lita, and María

A potential marriage candidate for María materializes at the wedding. Robert Davis (Fred Astaire) is an entertainer visiting from New York. He’s in Buenos Aires to indulge his love of gambling at the racetrack. Because he has run out of funds, he tries to line up a gig at Hotel Acuña. Xavier Cugat is the headline act there and “Cugie” promises Bob he’ll do all he can to bring him to Acuña’s attention. Cugat and his orchestra play at the wedding (don’t miss Lina Romay singing!) and bring Bob along to sing “Dearly Beloved.” Don Eduardo pays no attention to the song, then to further the injury, Bob meets María on the terrace and they take an immediate dislike to each other. Not realizing who she is, Bob gets in a conversation and strongly criticizes her father. No job for Bob. 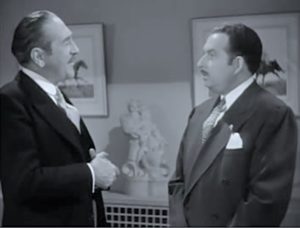 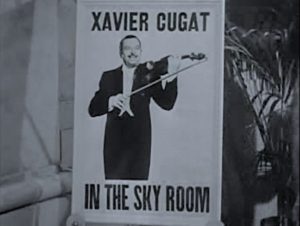 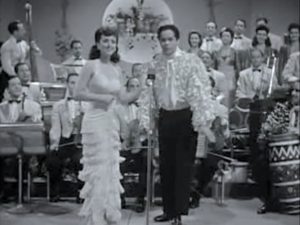 “On second thought, I guess old “El Groucho” can wait. Don’t these overdone weddings bore you to death? They kill me. I always say, if two people want to get married, let ’em! They don’t have to go through a shindig like this. It’s murder!” –Bob

Don Eduardo would very much like for María to marry. He thinks that she has high romantic standards. He calls in María’s godmother for assistance in cooking up a plan. Acuña decides to play an imaginary secret admirer. He sends a note and flowers to her, but the gifts don’t excite her. A study of love letter reference books helps him attempt to write more passionate notes. María finally begins to respond to the daily missives and orchids. Her two sisters are ecstatic, thinking that their time may be at hand. 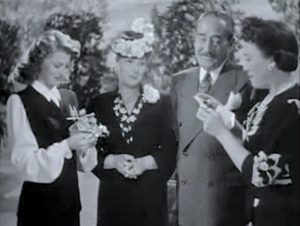 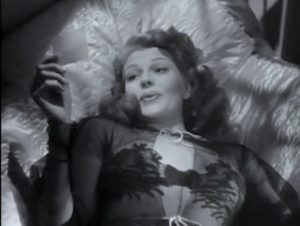 “María’s as old-fashioned as a hoop skirt. –Ridiculous, I know my own daughter. –You think you know your own daughter. –I know there’s something wrong with her. She hasn’t fallen in love since she was 15 when she got starry eyed about that silly man on a white horse. –Lochinvar? –Yes you’d think she would have outgrown a tin hero by know. She’s probably waiting around for a myth to come to life!” –María Castro and Eduardo

Back to Acuña’s office Bob goes to ask for a job again. Through a mixup, he gets sent to the Acuña mansion to deliver that day’s love message and flowers. Unbeknownst to him, he becomes María’s Lochinvar, the knight-in-shining-armor of her dreams. After his delivery duties, Bob goes back to the Hotel Acuña with Cugat’s band to force an audition. He does a spectacular conga-tap, which Don Eduardo despises. Still no job for Bob. 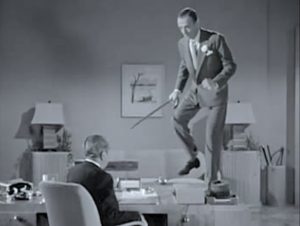 Will they or won’t they?

María visits Acuña’s office to give him the good news that she is in love with Bob. Papa has a hysterical fit! He calms down enough to call Bob in to make a deal – Bob can play the secret admirer long enough to convince María he is a bad bet.

Bob is the main course at that night’s family dinner. While Bob is trying to convince María of his bad qualities, she sings “I’m Old-Fashioned” and captivates him. She is amazing in a dress of black lace and illusion with a low waist, cap sleeves, and diamond clips at her hip bones (the designer Irene outdid herself on this one!). 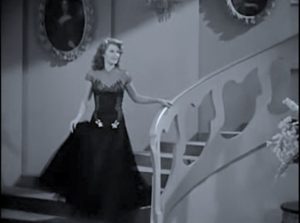 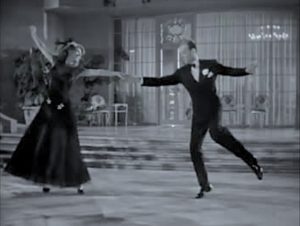 “But you’re streamlined, you’re today. Sister, I was raised amongst the grasshoppers. I am strictly from corn!” –Bob

Bob and María dance together and magic is made. As far as Bob is concerned, all bets with Acuña are now off. He would gladly be María’s champion, despite Acuña’s low opinion of him.

Johnny Mercer and Jerome Kern provide the lively music for You Were Never Lovelier Latin romance. Song and dance numbers in the film include:

[Did you see when Charo was on Dancing with the Stars? She was married to Cugat and sang with the band.]

You Were Never Lovelier is a light, fanciful, romantic showcase for the Latin beauty and allure of Rita Hayworth. Almost every frame of film she appears in could be used as a GI pin-up. Fred Astaire doesn’t stand a chance of remaining aloof from her charms very long. It’s worth the time to watch the romance develop, their fabulous dancing together, and see how the couple escapes the schemes of her controlling Papa. 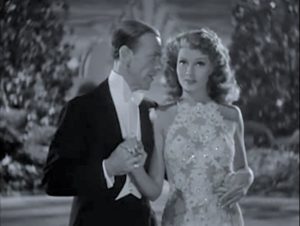 Resource Links for You Were Never Lovelier