Weekend in Havana (1941) is a fun musical romantic comedy that takes place in pre-war Havana. Cuba was a land of nightclubs and exciting drinks, sugar cane fields, hibiscus, ginger, and anthurium flowers.

Rom-coms always revolve around the “meet cute” of the couple destined for romance. This musical is no different, with Alice Faye and John Payne unable to get along over the grounding of a cruise ship on its way to Havana from New York.

Music of Weekend in Havana

I’ll introduce you to the musical numbers first. I’m sure they will get you interested in the crazy plot!

Now for the plot. Weekend in Havana opens with travel agency and cruise posters showing the fun in Havana, Cuba. 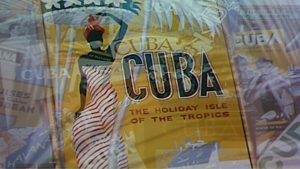 In the office of McCracken Steam Ship Company, owner Walter McCracken finds out that the Cuban Queen is on the rocks 200 yards off shore of Florida. Jay Williams (John Payne) is in his office getting fitted for a tuxedo while Terry, his fiancée, watches. She’s the owner’s daughter. Mr. McCracken wants to send Jay to the ship to handle potential lawsuits. Terry is mad because Jay might not come back in time for their wedding.

” There weren’t any casualties, but there could be plenty of lawsuits! Now you’ve got to get ready and get down there and take care of things. – Oh no he doesn’t! Jay doesn’t leave this town. Have you forgotten we’re being married Saturday? –I had but it doesn’t make any difference. –Oh doesn’t it? –No. That ship’s worth five million. Your wedding is only costing three thousand.” –McCracken and Terry 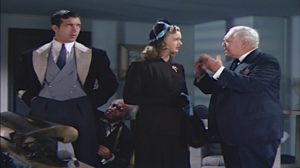 Jay makes it to the Cuban Queen and gets waiver signatures from every passenger except Miss Nan Spencer. She has one of the smallest cabins on the ship and he seeks her out.

“But what about my vacation? What happens to me? –Well, after all, Miss Spencer, it couldn’t be helped. It was no one’s fault. –It was too somebody’s fault! –It was? Whose? –The captain’s. If he had been up on the bridge where he belonged instead of where he was there never would have been any accident.” –Miss Spencer and Jay 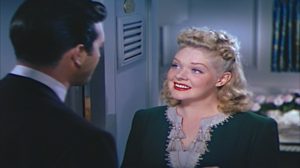 She is very angry at the captain for running ship aground. Jay offers her a replacement ticket for two weeks later on a new ship. She can’t take her vacation then and she doesn’t want to go back to working at Macy’s without her trip. He offers to fly her to Cuba but she wants a guarantee she will have a good time. She won’t sign the waiver unless she’s had a good time. McCracken orders Jay not to leave Miss Spencer’s side.

Next we see the Pan Am Clipper flying into Havana harbor. We are treated to beautiful Technicolor images of the city including the casino, the racetrack, and Sloppy Joe’s bar. 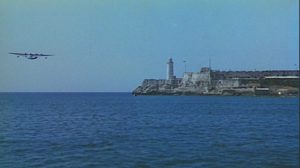 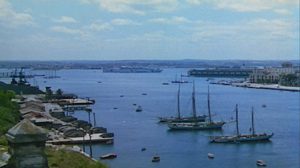 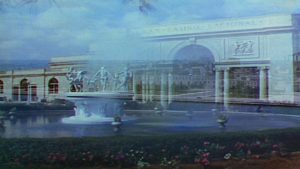 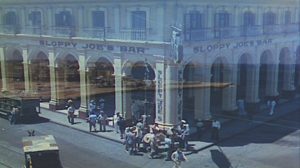 In her beautiful luxury hotel suite, Nan discusses the romance of Havana with the bellman. She asks him about the best nightclubs. She takes Jay on a tour of her suite. He tries to get her to sign the waiver again, and she refuses. She doesn’t trust the McCracken company.

Jay starts her tour with a drive out to the sugar cane fields. She is not satisfied and not having a good time. She wants to do what she imagines Arnold Spreckels, the sugar magnate, would do with her. 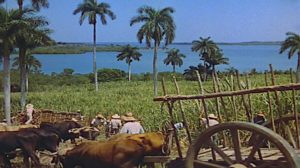 She wants to go to Casino Madelino. Jay takes her to the Casino to see Rosita’s floor show. Nan leaves Jay, hoping to find some romance. She wanders out to the courtyard where she meets Monte Blanca (Cesar Romero) in the moonlight.

“I have seen hundreds of women standing there and I have kept right on smoking. But you, señorita! Are you alone? –Well no. I mean I came with a man but I’m going home alone. –Well one of two things happened, señorita. You were insulted or you were not insulted. And beyond that you are not going home alone. –Nan and Monty 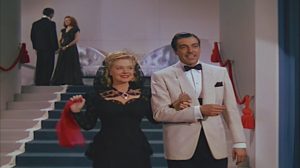 Monty sees her home to the hotel and asks her out for the following night. He plans to take her to the gambling tables in the casino. Monty meets with the bellman who has tipped him off to the fabulously wealthy Miss Spencer.

Next night at the casino Monty and Nan go to the roulette table. Jay follows them. Monte goes to the casino owner’s office to talk about his debts. Monte assures the owner that his date owns half of America. Meanwhile, Nan is winning hugely at the table, which will not help Monte’s debt. After losing $3000, Nan reveals to Monte that she is a shop girl at Macy’s. Now Monte is in fear of his life. When he returns to the casino owner’s office, Jay is on the spot offering to pay for Nan’s losses. He offers Monte a deal to keep Nan happy.

“You Cubans are supposed to be experts at romance. –Oh no, I am not a Cuban. I was born in Brooklyn as a child. But I have a feel for romance.” –Jay and Monte

Rosita accosts Monte as he’s waiting for Nan. She wants Monte to pay her back for money he has lost gambling.

Terry sends Jay a cable telling him how angry she is about postponing their wedding. Rosita looks for Jay to discuss “the blonde.” Jay tries to get her to forget about Nan. Jay agrees to meet Rosita at El Arbolado at 10 o’clock. The owner tells Jay that the house was a hangout of the pirate Henry Morgan. Jay tells Rosita that he is going to be Rosita’s new manager, replacing Monte. 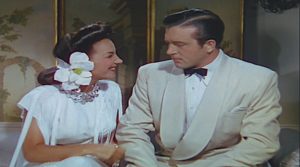 When Jay tries to order dinner, he sees Monte and Nan arriving. He desperately tries to keep Rosita away from Nan while trying to avoid love-making with Rosita. Rosita finds Nan and Monte on the next balcony and Monte reveals everything.

Nan runs away in a huff. Jay chases her in a car. His car crashes when he doesn’t set the brake. They try to hike the 17 miles back to town. They end up making out while they wait to be rescued. They sing Tropical Magic as they ride home lying in a sugar cane cart.

Jay and Nan share breakfast. Nan is giddy with love. She has signed her own version of the waiver. Suddenly, Terry arrives. Nan tears up the waiver. A series of events happen with a check from Terry to Nan which ends up getting Monte out of trouble and Jay questioning a marriage to Terry. It’s a romantic comedy! Everyone is happy in the end.

Alice Faye is a cute, lovely girl. She acts with her beautiful blue eyes even while she’s singing. She was a fixture of Fox musicals before Betty Grable. I will watch any Carmen Miranda movie – she is a ball of energy and such a talented singer! If you want to relax with some light hearted fun in the atmosphere of old time Havana, try out Weekend in Havana.

Resource links for Weekend in Havana