Twelve O’Clock High (1949) is a story of a group of airborne warriors from World War II. Ever since Orville and Wilbur Wright got us off the ground, Americans have been fascinated with the daring young women and men in their flying machines. In times of war, aviators fought gallantly.

“We’re in a war, a shooting war. We’ve got to fight and some of us have got to die. I’m not telling you not to be afraid. Fear is normal. But stop worrying about it, and about yourselves. Stop making plans. Forget about going home. Consider yourselves already dead. Once you accept that idea, it won’t be so tough.” — Frank Savage

Twelve O’Clock High is the story of the 8th Air Force, the only Americans that fought in Europe during the fall of 1942. Their mission is daylight precision bombing of enemy targets.

The 918th Group flies B-17’s out of Archbury, near London. The Group’s leader is Keith Davenport (Gary Merrill.) Davenport cares very deeply about the young men he sends out on missions. He suffers intensely when they are injured — and even worse when they don’t come back.

The Group faces a day full of crises. Waves of B-17’s return from a daylight bombing run over Germany. One of the planes comes in without landing gear, belly sliding along the runway. The turret gunner bailed out in France, leaving his severed arm behind in the plane. Another boy broke his leg and suffered a terrible head wound which has exposed his brain. 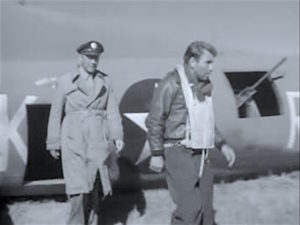 The two boys from the crew left in one piece go through a debriefing process after their mission. In the group leader’s office, a German propaganda radio broadcast blares loudly, attempting to demoralize the 918th. Davenport has to tell one of the boys that he’s been through too much to go on any more missions. The boy kills himself, and Davenport ignores headquarters’ orders to fly the next mission in order to hold the boy’s funeral. 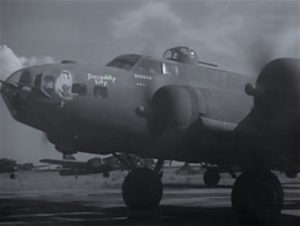 “He’s gonna bust wide open. And he’s gonna do it to himself, too. Why? Because he’s a first rate guy. Because those are his boys and he’s thinking about them instead of missions. Over-identification with his men, I think that’s what they call it.” — Frank Savage

Headquarters decides they can’t have Davenport picking and choosing his own missions. So General Frank Savage (Gregory Peck) is sent to replace Davenport. In his new role, he acts like the most pedantic headmaster there ever was, demanding the strictest adherence to regulations. He pushes the Group to take pride in itself and hold up their part of the Allied mission. The airmen personalize their planes with names like “Picadilly Lily” and “Fluffy Fuzz.” Savage flies missions with his men to show he’s as tough as he’s asking them to be. As time passes, he finds that identifying with his men is inevitable. 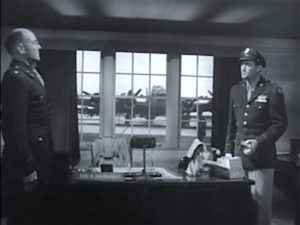 “Soldier, this is a military post, not a zoo. From now on you’ll check everyone who enters and without exception. Take a good look at me. If you or any man on this post passes me up again without saluting even if I’m a block away, you’ll wonder what fell on you.” –Frank Savage

The men try to relax each evening in the officers’ lounge. On the fireplace is a porcelain portrait beer mug with a pirate on it (Toby jug). Normally, the pirate’s face looks toward the wall. The Group uses the mug as a secret signal. If the mug is turned to face out into the room, they all know it means Red Alert. Years later, Harvey Stovall (Dean Jagger) sees the mug in an antique shop window in London. He can’t wait to buy it as a reminder of his days in the war. (Dean Jagger won an Academy Award for his role in this film.) 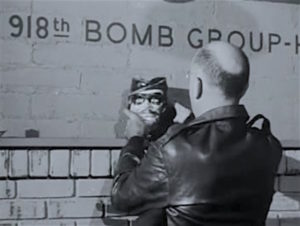 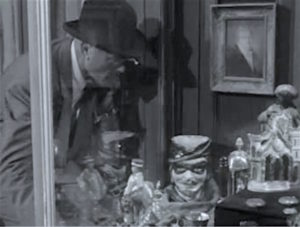 Twelve O’Clock High is a suspenseful, gripping war drama with excellent aerial scenes. Actual combat footage heightens the feeling of realism. Though there are many war films created with similar themes, this is one of the best World War II stories made. 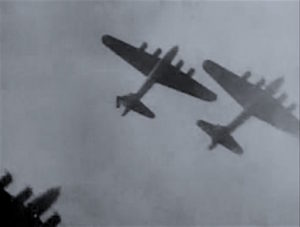