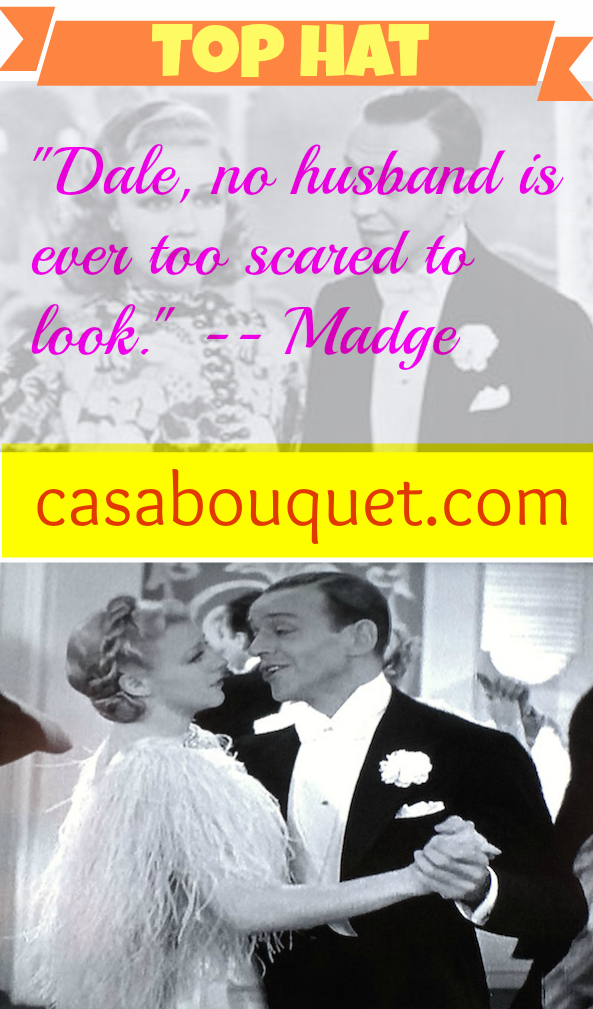 “Heaven, I’m in heaven,  And my heart beats so that I can hardly speak… And I seem to find the happiness I seek,  When we’re out together dancing cheek to cheek.”  –Fred Astaire

Top Hat (1935) takes us on a grand tour with stops at two deluxe hotels. The first is in London, the other is on an island resort in Venice. Art director Van Nest Polglase gives these hotels a glossy art deco sheen by filling rooms with statues, vases and murals inspired by Greek, Japanese, and Egyptian themes. It’s through these rooms that Fred and Ginger float to the unforgettable music of Irving Berlin.

In the opening scene, entertainer Jerry Travers (Fred Astaire) waits for his friend, the producer Horace Hardwick (Edward Everett Horton), at the Thackeray Club in London. Jerry stars in a new revue that Horace is producing. 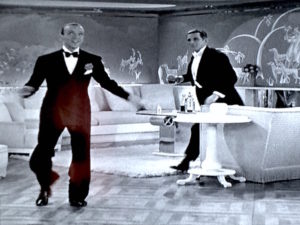 The Thackeray Club is a stuffy pile of a place with brocade chairs, heavy hangings, a huge fireplace and a rule of total silence. They decide that this is no fun, so they go back to Horace’s hotel where Jerry is much more at ease. He does an exuberant tap dance that wakes up a girl staying in the room below, Dale Tremont (Ginger Rogers.) Jerry falls in love when she marches upstairs in her negligee to give him an angry dressing-down. In order to lull her back to sleep, he turns the dance into a softshoe after she goes back downstairs. 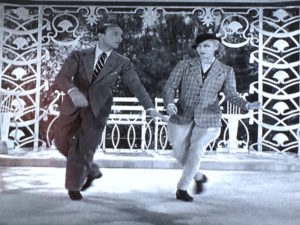 Dale rides horseback at the Bel Cher Riding Academy in the park. Jerry follows her there and they get caught in a downpour. They take refuge in a bandstand, all lovely and white with architectural accents like sinuous curves, shells, and lyres. Jerry attempts to be friendly with Dale by dancing.

“- Entré nous, the desk clerk has intimated that Mr. Bedini provides Miss Tremont with all the niceties, including her clothes. - Really? - And her niceties are very nice.” — Hotel flower shop staff

Alberto Bedini (Erik Rhodes) is a fashion designer anxious to make an impression with high society. He and Dale have an arrangement — she wears his clothes wherever she goes; she’s basically a walking advertisement. One of his most beautiful designs is a white satin confection. It’s backless with ostrich feathers on the shoulders and the lower skirt. 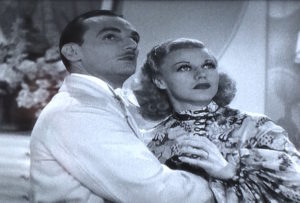 “We have make agreement. Bedini designs the clothes which you wear among your friends, the smart people, so that they ask ‘Who is so smart to make these smart clothes?’ and you say ‘Who? Who is so smart? Bedini!'” — Alberto Bedini

In an elaborate mix-up, Dale thinks Jerry is Horace, her friend Madge’s husband. The action moves to the Lido in Venice where Madge Hardwick (Helen Broderick) is staying. The resort is a light-filled fairyland with gondolas, bridges, fountains, and a plaza-like area containing a polished dance floor. Dale finds Madge in the outdoor cafe drinking Horse’s Neck cocktails. 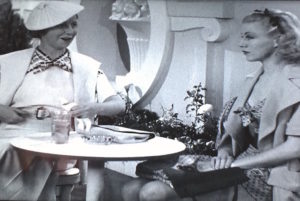 “- Madge, have you any objections if I scare your husband so that he’ll never look at another woman?”  ”- Dale, no husband is ever too scared to look.” — Dale and Madge

The hotel is packed with carnival revelers, forcing Jerry and Horace to share the bridal suite. Their room looks like a wedding cake with oriental dancing figures and flying horses on the walls, white shimmery curtains, storks and a giant round bed.

The stage is set for misadventures and misunderstandings between Madge, Dale, Jerry, Bedini, Horace, and Horace’s valet, Bates (Eric Blore.) It’s a great cast and they seem to have a lot of fun. Fortunately, romance rules the day and Dale and Jerry sort things out. 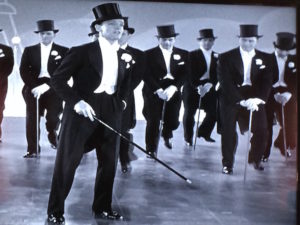 The songs by Irving Berlin and choreography by Hermes Pan are perfectly suited to Fred and Ginger’s style. “I’m Fancy Free” and “Isn’t a Lovely Day to be Caught in the Rain” help start their romance in London. (How can they dance so wonderfully when Fred is in a tweed suit with a tie and Ginger is in a riding habit?)

Fred’s big number is “Top Hat, White Tie, and Tails.” The quintessential debonair Fred is on stage with dozens of men in white tie. He uses his cane to “shoot” the other dancers. At the Lido, Fred makes love to Ginger by singing and dancing to “Cheek to Cheek,” the essence of romance.

The big production number at the Carnival is “The Piccolino.” Ginger introduces the song with her peppy style, the Carnival dancers perform an extravaganza, and then Fred and Ginger take command of the floor. 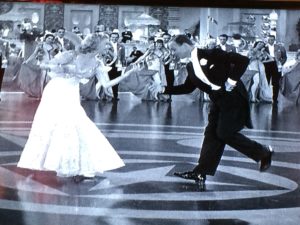 For sparkling, wonderful music and dancing, art deco luxury, sharp comedy, and romance with Fred and Ginger one can’t do better than Top Hat.