You are here: Home / Culture / Lisa’s Home Bijou: Too Many Girls

Too Many Girls (1940) stars DESI ARNAZ, who became a Mambo King in New York after emigrating from Cuba. He was mentored by Xavier Cugat, then toured the country with his own band, bringing the conga drum and ritmo latino to mainstream America. George Abbott, the Broadway producer, liked his style and invited him to appear in his Rodgers and Hart musical, Too Many Girls. Luckily for us, Desi repeated his performance when the play was adapted to film.

Too Many Girls is a spirited look at college life at the end of the Depression. Football and dating are the major course of study for the students at Pottawatomie University in Stop Gap, New Mexico. Pottawatomie is a cow college with a student body ratio of 10 girls to every boy. Why would a group of All-American football stars attend this small school in the southwestern desert?

Clint Kelly (Richard Carlson), the Princeton quarterback, is working for the summer at the “Hunted Stag”, his family’s inn in Maine. His fellow waiter is Manuelito Lynch (Desi Arnaz). Manuelito has the reputation of being the greatest prep star to come along in 50 years. Clint wants him to play for Princeton, so he tries to hide Manuelito from the Ivy League scouts. 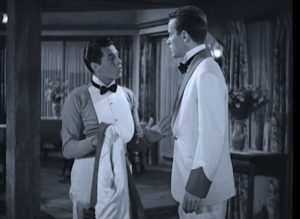 Mr. Casey and his lovely daughter

JoJo Jordan (Eddie Bracken), the Harvard quarterback, and Al Terwilliger (Hal LeRoy) discover Manuelito at the same time that Mr. Harvey Casey arrives at the inn. Casey is wealthy and owns Casey Allied Industries. In fact he’s so rich, he has $7.50 more than Henry Ford. Casey has a wild daughter who has just been deported from Switzerland. After meeting the four football players, he realizes that they might make the perfect bodyguards for his wayward daughter. Casey makes the boys an offer that they have trouble refusing.

“…She was driving a speedboat much too fast and cracked into a pontoon. Unfortunately, the President of Switzerland was on the pontoon, making a speech on safety.” –Mr. Harvey Casey

Consuelo Casey (Lucille Ball) arrives at the inn to meet with her dad about her college plans. He wants her to go to Vassar (ah, for the old days when you could go wherever you could afford!) Consuelo has decided instead to attend Pottawatomie, her dad’s alma mater. Consuelo is a stunning girl and once the four football stars hear her sing, “You’re nearer than my head is to my pillow,” they decide to give up their own college plans and go to Pottawatomie to watch over her. After asking the boys to sign an anti-romance clause, Mr. Casey, Pottawatomie Class of ’04, clinches the deal with a rendition of the school’s alma mater: 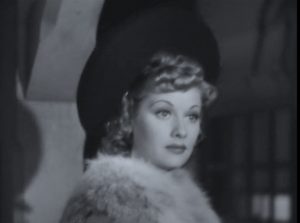 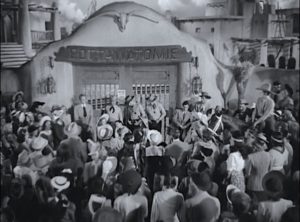 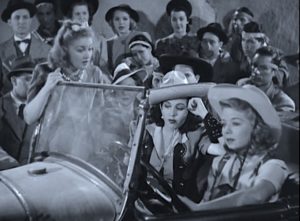 The camera cuts away to all the Pottawatomie students singing in front of the locked school gates. Pepe (Ann Miller) and Eileen Eilers (Frances Langford) are out trying to raise $300 needed to pay the utility bills so that the school can open for fall semester. Just then, our All-Americans arrive and pay the bill with their bodyguard salaries. In the first of several enthusiastic production numbers in the campus plaza, Eileen leads the students singing,

“Come you all, kick up the cakewalk, ‘cuz we got cake! Lady Luck finally learned to bake!” 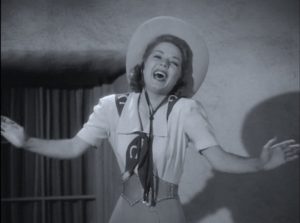 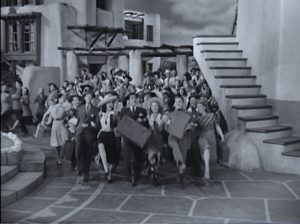 Meanwhile, Clint is shadowing Consuelo on the train to Stop Gap. He catches her writing a letter to Beverly Waverly, a playwright who is spending the winter at his ranch eight miles from campus. When the two finally arrive on campus, Consuelo gets whisked away to be interviewed as a potential pledge for the girls’ organization, Bar S. She is accepted and dons the special beanie that all the girls wear. Her bodyguards believe that a beanie’s presence indicates that a girl doesn’t neck, so they are determined to keep Consuelo from losing hers. 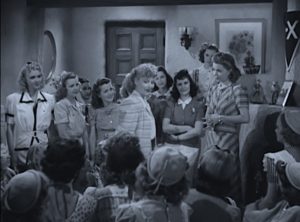 A big get-together at the President’s hacienda provides another excuse for a production number. Manuelito sings “All dressed up, speakin’ Spanish” and leads a mambo. Pepe joins in by tap dancing and liberally shows off her legs. During the celebration, JoJo enjoys a date with 10 girls. 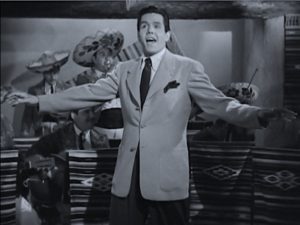 “I went with a senior at Wellesley. They’re all air-conditioned. –What do you mean, air-conditioned? –40 degrees cooler in the house than on the street.”—JoJo and co-ed 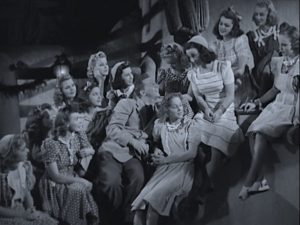 It’s all about the football

The boys are frustrated by their inability to help the school’s football team:

“You know, the 50-yard line is right on the Mexican border. Our team never seems to cross it. –They’re waiting for passports. The score is only 26 to nothing. –Texas Gentile has only scored once this quarter? –I wonder what’s holding them up? –Well, they’re a smart semi-pro outfit. I guess they figure it’s no use pouring it on.” –Clint and JoJo 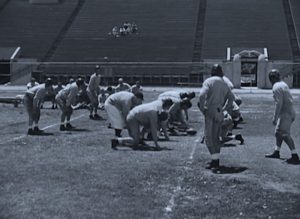 With Consuelo’s help, the boys lose their football frustrations and love eventually blossoms for all the young people. 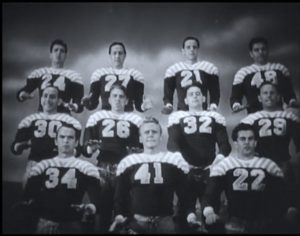 The music and lyrics by Richard Rodgers and Lorenz Hart (of Pal Joey fame) fill every scene with music and inspire spirited dancing. We’re Heroes in the Fall is sung over the opening credits (keep a sharp lookout for Van Johnson in his first screen appearance), Frances Langford sings Love Never Went to College, and Lucille Ball introduces the standard I Didn’t Know What Time it Was (actually sung by Trudy Irwin). 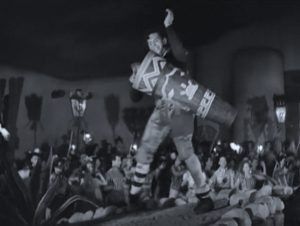 Desi Arnaz exhibits no restraint with his conga drum and Ann Miller matches his abandon with her tapping. Too Many Girls marks the film debut of Desi Arnaz, Van Johnson, and Eddie Bracken and was the place where Lucy and Desi met each other, soon forming one of the 20th century’s great partnerships. Sombreros, coeds, football, and mambo with Desi Arnaz as Latin lover and musician make for a silly but memorable musical comedy.

Resource Links for Too Many Girls