You are here: Home / Culture / Lisa’s Home Bijou: After the Thin Man

DASHIELL HAMMETT created the sparkling detective couple Nick and Nora Charles for his novel, The Thin Man. Portrayed in the movies by William Powell and Myrna Loy, this matching of matrimonial opposites attained a long-lasting popularity. 1936’s After the Thin Man is the detective duo’s second screen outing, set in one of our country’s most beautiful cities during one of its most glittering eras.

After the Thin Man takes us back to San Francisco in the 1930s, when residents from all walks of life and cultural backgrounds mixed together in this open-minded city. On New Year’s Eve, the Sunset Limited, a streamlined train from New York, speeds into San Francisco after a three-day voyage. On the train are Nick Charles (William Powell) and his lovely new bride Nora (Myrna Loy.) Nick, a streetwise guy and a witty friend to the police and hoods alike, always has a martini or highball of some sort handy. Nora is a blue-blooded San Franciscan, a scion of one of Nob Hill’s society families. Reporters have heard that Nick is arriving and mob him at the station platform, where he announces that he is retiring from detective work. Meanwhile, one of Nick’s old acquaintances bumps Nora, steals her purse, then slips it back to Nick. It’s a reminder to Nick of his social circle. 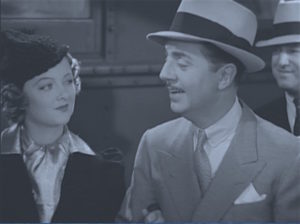 Nick and Nora drive past cable cars and street cars in their open automobile. All the newsboys know Nick and hail him. They pull up next to a couple in a limousine.

The Charleses arrive at their beautiful estate, which overlooks San Francisco Bay. They enter the house only to find a huge party is taking place to celebrate their homecoming. In the midst of all the revelry, nobody notices that Nick and Nora have arrived home and joined in the drinking and dancing at their own party. 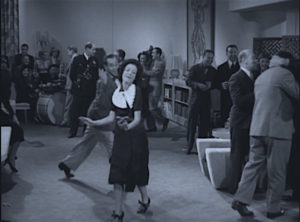 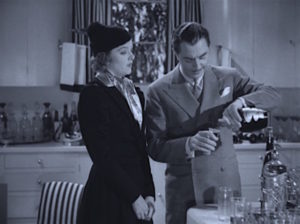 The dowager of Nora’s family, Aunt Katherine (Jessie Ralph), asks the couple to join her and the family for dinner. Nick takes a stiff drink to fortify himself in anticipation of facing the relations. When Nick and Nora arrive at Aunt Katherine’s Victorian pile of a mansion, the relatives are all assembled. Everyone is over 60, save for young Selma (Elissa Landi), Katherine’s daughter. Selma’s husband, Robert, is conspicuous by his absence from the party. After dinner, in the old-fashioned way, the women retire, leaving the men to their  cigars and brandy. Soon Nick is the only man awake amongst the elderly gentlemen. Nora rescues him from the snoring throng so that they both can listen to Selma’s problem. 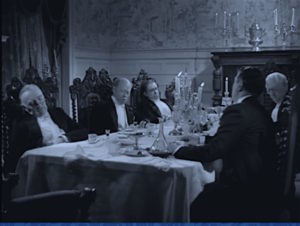 Selma believes that Robert has only married her for her money. She thinks he’s presently off with some other woman. Aunt Katherine hopes that Nick can investigate Robert’s whereabouts in a discreet way. At this point, an old friend of the young people joins the party, David Graham (James Stewart). He reminisces about the days when he and Selma and Nick and Nora were all engaged. David reports that Robert recently called and offered him $25,000 to take Selma off his hands. 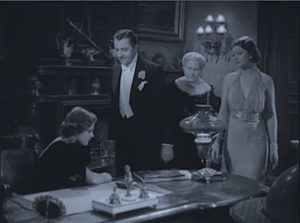 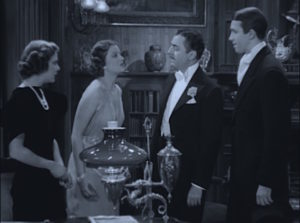 Harold, the chauffeur, takes the Charleses to the Lychee, a popular nightclub in Chinatown, in order to “get the taste of respectability out of their mouths.” They also believe that Robert might be spending some time there. At the Lychee, Polly Byrnes (Penny Singleton) is leading the big floor show, “Blow That Horn.” The chorines are all wearing drums on their heads and musical instruments on their satin ballerina skirts. 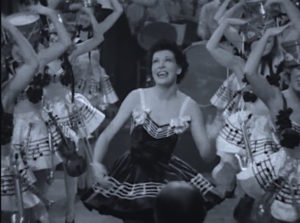 Phil, Polly’s brother, is angrily waiting in her dressing room. He slaps her over a check that Robert has given her. We learn that Polly is the mystery woman that Robert has taken up with, and that Dancer (Joseph Calleia), the co-owner of the nightclub, has concocted an underhanded scheme for Polly and Robert. Dancer lets Nick and Nora into the club and they spot Robert immediately. Robert emphatically and drunkenly tells them that he’s not going back to Selma unless he absolutely has to. Nick and Nora enjoy the New Year’s Eve revelry when Willy the Weeper and a few other low-life friends join their table. Willy’s just been let out of prison on parole and says he needs to be seen with some respectable people. 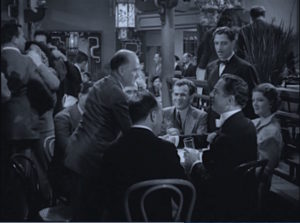 Meanwhile, Polly sends Robert to call David about the $25,000 before she goes on the floor to sing “Smoke Dreams.” Nick and Nora indulge in some flirtatious repartee.

Nora–“What do you mean?” Nick–“I mean, did I ever tell you that you’re the most fascinating woman this side of the Rockies?” Nora–“Wait ’til you see me on the other side!”

David gives Robert $25,000 worth of bonds and Polly promises to run away with him. Dancer and his partner, Lum Kee, seem to have plans for Robert, as well. Robert stops home to pick up some clothes and lift a few pieces of Selma’s jewelry. She sees him do this, so she puts on a coat, grabs a gun, and follows him outside. Robert is shot on the sidewalk in a dense fog. Was the murderer Phil, Selma, David, Polly, Dancer, or Lum Kee? It will take Nick and Nora’s best detective skills to find out.

“And I don’t need anything in the world, darling, but you… and a toothbrush.” – Nick Charles

After the Thin Man is a lively and entertaining film with unpredictable characters and many plot twists. As always, it’s a treat to see Nick and the police lieutenant gather all the possible suspects in one tiny room to grill them, trick them, and tie up all the loose ends. After the Thin Man offers an amusing look at the San Francisco of the 1930s — and at the wonderful partnership of Nick and Nora Charles. 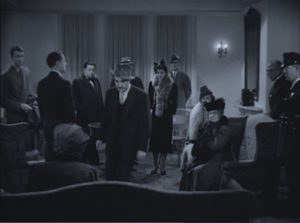