Try The Women if you like to revel in juicy gossip. An all-star ensemble cast featuring Rosalind Russell, Joan Crawford, Norma Shearer, Joan Fontaine, and Paulette Goddard, the women mew and claw their way through a variety of misadventures in Connecticut, New York and Nevada. Part of the story takes place in Reno where the women travel for divorces, or in other words, get “Reno-vated.” It’s here where Goddard and Russell have a terrific catfight at a ranch, complete with biting and scratching.

“Edith, take a good grip on yourself, you’re going to die. Stephen Haines is stepping out on Mary! –What? –But Sylvia, darling who told you? A manicurist? Well, go on!” –Sylvia and Edith 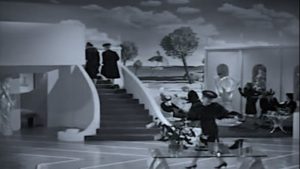 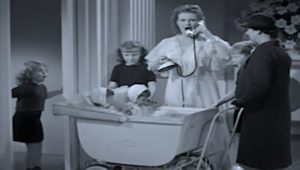 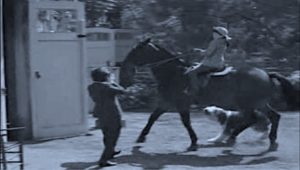 Adapted by Anita Loos and Jane Murfin from Vanity Fair editor Clare Boothe’s hit Broadway play, The Women moves ahead via conversations overheard in a variety of locations: a beauty spa, ladies lounge, in dressing rooms, private bathrooms and kitchens. It’s so skillfully crafted that I didn’t realize until forty minutes into the film that we hadn’t yet seen any of the men that the women were so wittily discussing.

“This gentleman walks up to the counter. So Crystal nabs him. “I want some perfume,” he says. “May I ask what type of woman for?” … Well Crystal goes on conning him and batting her eyes. She’s got those eyes that run up and down a man like a searchlight.” –Olga 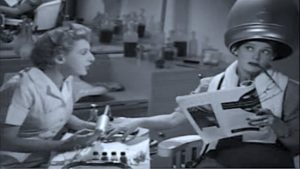 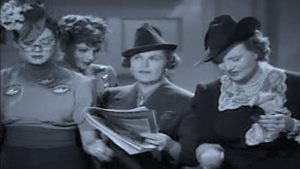 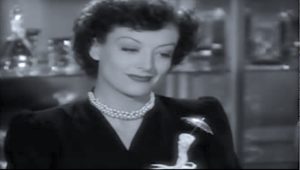 All walks of life

In The Women, there’s a variety of social interplay (including backstabbing) between women from all walks of life: shop girls, cooks and maids, showgirls, beauticians, journalists, young newlyweds, and society matrons. We are treated to their home movies, manicures done in Jungle Red, and private flirtatious telephone conversations held while immersed in a bubble bath.

“But we women are so much more sensible. When we tire of ourselves we change the ways we do our hair or hire a new cook or decorate the house. I suppose a man could do over his office but he never thinks of anything so simple. No dear, a man has only one escape from his old self. To see a different self in the mirror of some woman’s eyes.” –Mary’s mother 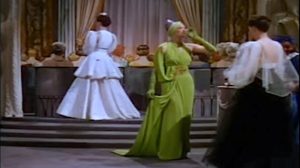 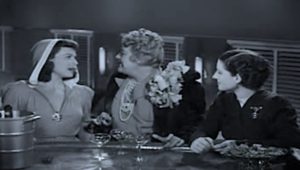 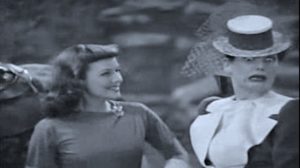 Though filmed in black and white, The Women has an unusual Technicolor segment featuring a fashion show by the great Hollywood fashion designer, Adrian (who, among other things, is credited with giving Joan Crawford her shoulder pads.) The clothing in the fashion show ranges from tennis & swimming outfits to evening gowns.

“You know, the first man that can think up a good explanation how he can be in love with his wife AND another woman is gonna win that prize they’re always givin’ out in Sweden.” –Maggie 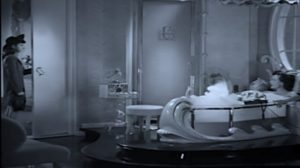 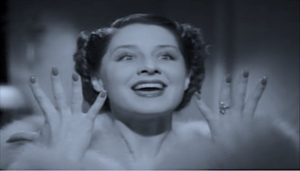 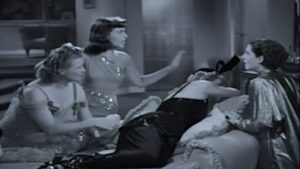 For Rosalind Russell and Joan Crawford, you won’t find many movies that showcase their talents better. (As I watched and giggled, I found myself thinking we still haven’t got a new movie this witty about women.) These actresses all look as if they are having a ball, and they carry us right along with them, all the way.

“We gotta be a wife, a real wife, and a mother too, and a pal, yeah, and a nursemaid. Sometimes when it comes to the point, we even gotta be a cutie. You should have licked that girl where she licked you, in his arms.” –Miriam

Resource links for The Women