When summer comes to New York City, it gets hot. Really hot. Back in the 1950s, Manhattan husbands used to pack their wives and children off to the seashore or to the mountains, creating a town full of “summer bachelors.” It’s within this atmosphere that Billy Wilder sets a delightful story about summer madness in “The Seven Year Itch (1955).”

“Something happens to people in this town in the summer; it’s disgraceful!”–Richard

Richard (Tom Ewell) has packed his wife and son (“the little space cadet”) off to Maine for the summer while he toils as a book editor in the heat of his apartment in New York City. Richard works for a company that publishes 25-cent pocket paperback novels, and while his family is away, he’s supposed to read and edit a book called “Man and the Unconscious.” This book becomes the underlying theme of the film, as Richard’s fantasy life takes over and he acts out vivid scenes from his own subconscious mind. 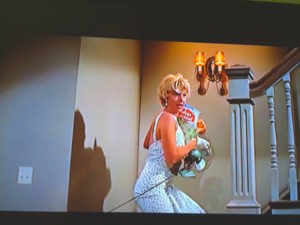 Richard’s doctor has recently forbidden him to smoke or drink, and he really tries to be good. He locks his cigarettes away, he eats dinner in a vegetarian restaurant, and he tries to drink raspberry soda instead of liquor. However, he doesn’t count on the diversion that’s about to enter his life.

“–We had the number 7 special, the soya bean hamburger with French fried soya bean, soya bean sherbet and peppermint tea. –Don’t forget I had a cocktail to start. – Oh yes, we had the sauerkraut juice on the rocks. You’ll be proud to know your entire meal with the cocktail was only 260 calories. – I am proud!” –Waitress and Richard 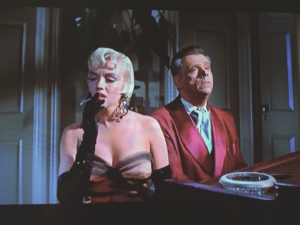 The first night Richard spends without his family, he discovers that A Girl (Marilyn Monroe) has sublet the apartment above his. She has short, tousled curls and a voluptuous figure, and wears bare, flattering, summer outfits in pastel colors. The Girl is a guileless 22 year-old model who sells toothpaste in live television commercials. The first time Richard fantasizes about her, his mind places her in a strapless tigress gown, so tight that she positively slinks. Richard is sorely tempted to dally with her, but as the film progresses, he learns a lot about himself and about his feelings for his wife by socializing with The Girl.

“When it’s hot like this, you know what I do? I keep my undies in the icebox!”–The Girl 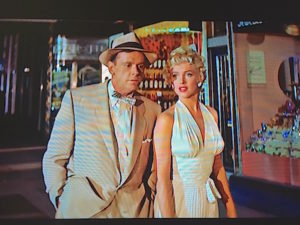 In one of the most famous scenes from the film, Richard and The Girl go to the movies so that they can cool off in air-conditioning for a few hours. The movie they see is ” The Creature from the Black Lagoon”, who The Girl intellectualizes as a tragic romantic figure. After they leave the theater, The Girl stands over a subway grate in the sidewalk and allows the air blast from a speeding train below to blow her white halter dress up to her ears, while she enjoys the breeze. It’s Marilyn at her best, and celluloid history. (This scene is also famous in that Marilyn’s real-life husband at the time, Joe DiMaggio, strongly objected to the shot and became publicly irate over his wife’s exhibitionism.)

Tom Ewell is perfect in his part as Richard; his rubber face speaks volumes, and Marilyn is at her comedic apex. Travilla designed the wardrobe, perfect for Marilyn. The script is based on a Broadway play by George Axelrod (“Will Success Spoil Rock Hunter?”). Wilder’s direction is impeccable as always, and the film is a wonderful summer antidote for heat rash, wherever you live.

This movie pre-dates Betty Friedan and “The Feminine Mystique”, and the attitudes about men and women can make it a little hard to watch. But Marilyn’s character is much smarter than she sounds and Tom Ewell’s character actually learns about love. I really like seeing Marilyn as a comedienne. This movie is also a good one for showing 1950s life. It’s fun to realize what we are still talking about from a distance of 60 years!