Tennessee Williams is one of the premier voices of the South, so a “set” of films about the South wouldn’t be complete without him. In “The Rose Tattoo,” (1955) we visit another Southern locale on the Gulf Coast between New Orleans and Biloxi, Mississippi.

“The Rose Tattoo” is an unusual story of hidden passions and love. The screenplay is based on the play by Tennessee Williams, author of “A Streetcar Named Desire” and “The Glass Menagerie”. It is said that Williams wrote this play with Anna Magnani in mind for the part of Serafina Delle Rose. Anna Magnani was a major star of the Italian cinema and came to the US to do “The Rose Tattoo.” She won the “Best Actress” Academy Award for this film in 1955.

The story takes place on the Gulf Coast in the South, in a small village somewhere between New Orleans and Biloxi. Most of the residents are Italian immigrants who work hard just to get by.

It’s early summer; graduation time at the local high school. Serafina, a seamstress, is busy making white dresses for the graduating girls. Her fifteen-year-old daughter, Rosa (Marisa Pavan), is caught up in all the excitement of the graduation dances and parties.

Serafina was married to a truck driver, who, in Italy, was a Sicilian baron. She loved her husband devotedly, to the point of worship. When her daughter Rosa was 12, Serafina became pregnant with her second child, a boy. Her husband was discovered to be smuggling illegal contraband under the bananas in his truck, and he died during a high-speed chase with the police. Serafina totally succumbed to grief, and lost the baby. 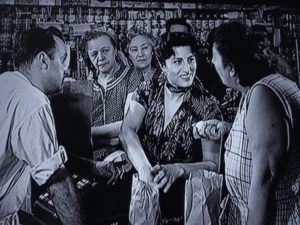 For years after her husband’s death, Serafina let herself go. Any effort is useless now that her beautiful husband is dead. She stays in the house, doesn’t dress, doesn’t brush her hair. She keeps her husband’s ashes in the living room, against the wishes of the church. Because she seems to have gone a bit mad, the village people are afraid of her.

“I’m so ashamed. This is the way she goes around all the time. She hasn’t put dress on since my father was killed. For three years she never puts a dress on or goes out of the house. Now she has locked up my clothes so I can’t go out.” –Rosa 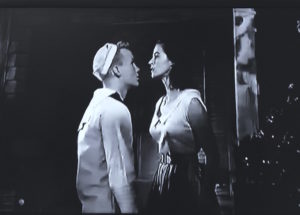 Rosa goes to a dance at the high school with her girlfriend and meets her friend’s brother, a young sailor. They fall in love. It’s very romantic– he looks at her like a fragile, precious flower. Meanwhile, Serafina is introduced to the bachelor brother of one of the church members. Like her husband, he is also a banana truck driver.

“Oh Madonna Santa, my husband’s body with the head of a clown! … A clown that smells like a goat!” –Serafina Delle Rose 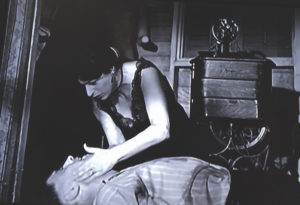 Alvaro Mangiacavallo (Burt Lancaster) is a big golden-retriever-puppy of a man whose name means “he who eats a horse.” He loves to laugh, and throws himself completely into whatever he’s doing. Serafina is attracted to him against her will, her intellect convincing her that she should be repulsed by him.

“Mrs. Delle Rose I don’t understand how a woman who acts like you could have such a sweet and refined young girl for a daughter. –Oh my! You want me to talk refined, do you? Then do me one thing please, stop ruining the girls at the high school! Okay?” –Teacher & Serafina

Marisa Pavan (Rosa) is lovely, sweet, and graceful. The art direction by Tambi Larsen and Hal Pereira is noteworthy, transporting you to the Gulf Coast. “The Rose Tattoo” is a loud movie. Don’t expect to sit back in your chair, quietly reflect, and wipe a few tears from your eyes. Between Anna and Burt, you’ll be sitting erect, wondering if someone is going to get thrown out the window, with all the shouting, banging, and Latin passion. The two actors insist on pulling you into the story–you feel hot just from watching them. 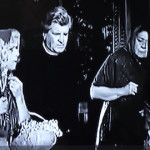 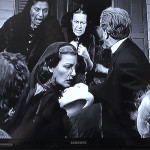 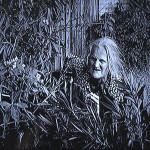 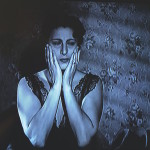 Particularly effective is a scene where Serafina tries to talk to the priest about her love for her husband. She wants the priest to reveal to her what her husband said in confession. The poor priest is totally out of his element: a celibate man trying to talk to a passionate, lusty woman.

“To me the marriage was beautiful like a religion. Now my marriage is dreams and memories only.” –Serafina

“The Rose Tattoo” shows us what lies beneath the surface of people’s lives, as Tennessee Williams loves to do. It is a story about a woman who finds out the truth about her dead husband, reawakens to life, and reawakens to love.

These are passionate, hot-blooded people. I think I like this movie because it reminds me of my Nicaraguan mother, who talked with passion and was a talented seamstress. The characters put such old-school emphasis on elegance and dressing and how you need to appear in the street.