Time to join William Faulkner on the veranda with a washtub full of cold beers icing down in the corner, on a long, hot summer’s day. 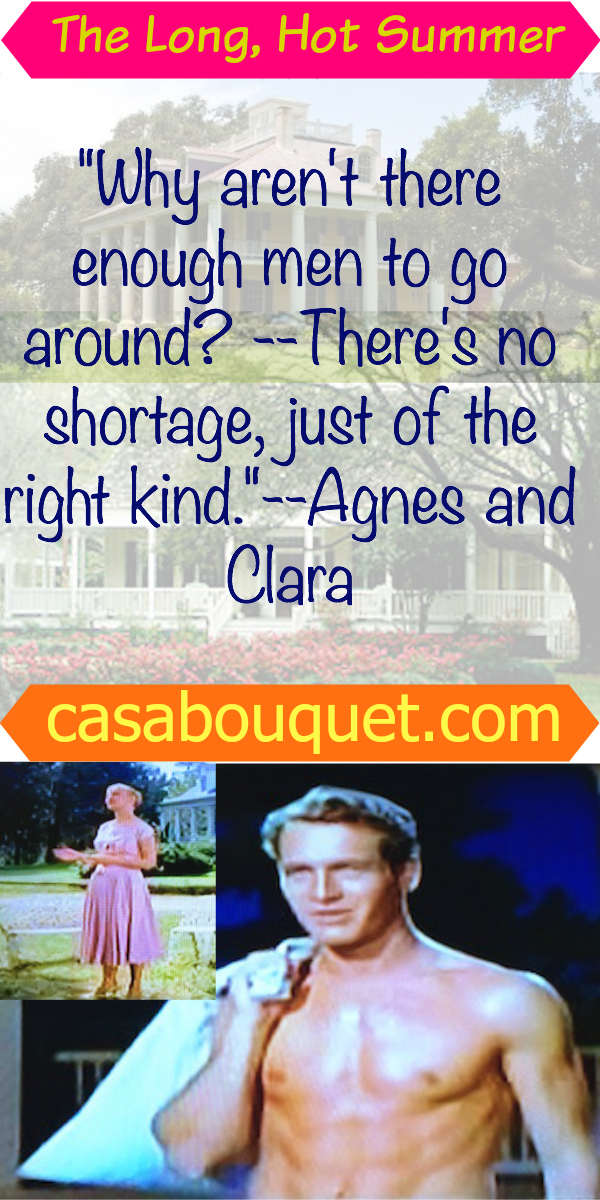 “Hey. I never move and work in the same day.”—Ben

When I think of summer in the South, I inevitably think of William Faulkner and his tales of life along the Mississippi, as in “Barn Burning,” “The Spotted Horses,” and “The Hamlet.” These three tales are skillfully woven together in a tapestry of hot desires and passions in the script for the 1958 version of “The Long, Hot Summer.”

When we first meet Ben Quick (Paul Newman), he’s being thrown out of town for suspicion of burning a barn for revenge. He hitches a ride on a barge down the Mississippi River, and upon landing, he is greeted by the sight of two young women joy riding in an open convertible. He hitches a ride with the two of them and discovers that they are on their way home to the small town of Frenchman’s Bend after a shopping trip in Memphis. They are part of the ungenteel-y rich Varner family, owners of the cotton gin, the store, tenant farms, and the grist mill.

One of the women in the car is Clara Varner (Joanne Woodward), a schoolteacher in Frenchman’s Bend, and one of several young women in town who are terrified of being left unmarried. The other young woman in the car is Eula Varner (Lee Remick), the cutest girl in town, who is married to Clara’s brother, Jody (Tony Franciosa). Eula enjoys being married to the richest boy in Frenchman’s Bend, but her conduct with him consists more of flirting and teasing rather than overt seducing.

“For your information, we’re still on the green side of 25 ourselves, for all the good it does us. … Ah Clara, it’s unnerving having all this time on my hands. I want to rush home and fix supper for some big handsome man. And put kids in the bathtub and broil steak and crack ice cream and think about what the night’s gonna bring. Why aren’t there enough men to go around? – There’s no shortage, just of the right kind. “—Agnes and Clara

Clara and Jody’s father, Will Varner (Orson Welles) is the central axis of the community; the self-made rich man in his sixties who’s worried that his children are not proving themselves. Will is desperate for grandchildren, and he’s willing to “sell” Clara to a bad boy like Ben just to get some frisky blood into the family. Will tries to get his way with everyone (and usually succeeds) by belittling them and just generally being a grumpy, domineering old coot.

“I’ll bet you was a mighty appealing little girl….There’s a church bazaar coming up next week. Now you wear a white dress and a ribbon in your hair and I’ll waltz you around under the moon.”–Ben

This film has several special accents of summertime in the south: the characters drink a lot of beer, lemonade, and Cokes under patio umbrellas on the lawn, and Will’s girlfriend, Minnie, has a veranda which she keeps stocked with cold beer in a galvanized washtub full of ice. There are also a few good southern chapeaux: pork-pie, Panama, and some gauzy picture hats.

A few of the actors seemed a bit miscast in this film. Orson Welles looks like he had spent too much time on his California sailboat without sunscreen (he has a hat on most of the time in the movie, making his face almost invisible.) In addition, many of Welles’ long speeches appeared to be overdubbed, and I wondered if he had slurred his speech too much in the original takes. Tony Franciosa does his best to portray Jody as a rich Southern heir with good intentions but a lack of brainpower, however I kept envisioning him as a Yankee Italian boy. On the other hand, Angela Lansbury does a memorable job playing the fortyish Minnie, aching to get married. As usual, she’s been cast in a role far beyond her actual years, but her maturity carries it off.

“You got a pencil, Will? –What for? –I want you to write something down. –What? –September 30, that’s the day. –What day? –A six layer vanilla cake is coming from Mayville suitably decorated in boiled white frosting. A hundred and four handwritten invitations have gone out, no children under 6 years. Women has got to take care of theirselves, Will, that’s what I done. –What have you done Minnie Littlejohn? –It’s all arranged, all but the license and the blood test and the wedding ring. –Wedding! You take that six layer white boiled frosting vanilla cake and you cut it up into a hundred and four pieces and you send it out with your regrets.” – Minnie and Will

Lee Remick is a joy to watch: dewy, luminous, and full of fun. This film is the first teaming on-screen of Paul Newman and Joanne Woodward, and they work beautifully and believably together.

So get yourself an ice-cold longneck, put on your hat, turn on the ceiling fan, and enjoy a good steamy southern yarn.

In “Lisa’s Home Bijou”, I’ll share my reviews of classic films and hopefully inspire you to have a few film festivals of your own. I am proud to claim Betty Grable as a distant cousin. My “film career” began when my parents named me for Leslie Caron’s character in “An American in Paris.”