Lena Horne plays the leading lady in Stormy Weather, a film legacy of her expressive voice and luminous beauty. One of America’s divine divas, she came to our attention as a chorine at Harlem’s famed Cotton Club and made her way to Hollywood to become the first black woman to sign a long-term contract with a major studio.

Stormy Weather (1943) is a retrospective of twenty-five years in the life of veteran entertainer Bill Williamson (Bill Robinson). His life in show business spans the years between the two World Wars and the miles between New York, Memphis, Chicago, and Hollywood. Bill is entertaining a group of children on the porch of his California home when the mailman delivers Theatre World magazine. Bill’s picture is on the cover with a big headline. 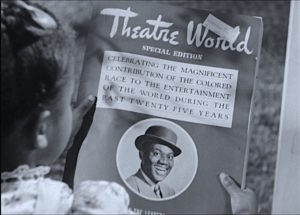 “Celebrating the magnificent contribution of the colored race to the entertainment of the world during the past twenty-five years.”

The magazine brings back a flood of memories to Bill. In 1918, he was a member of Jim Europe’s military band, which was part of a regiment that received the Croix de Guerre. Europe’s drum major was Noble Sissle, who later went on to co-write Broadway hits “Chocolate Dandies” and “Shuffle Along” with Eubie Blake. Bill recalls the band’s triumphant return from the War to New York City, shown with genuine newsreel footage. 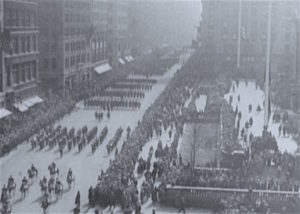 Bill and his friend Gabe (Dooley Wilson) celebrate at a dance hall. There they have their first meeting with the beautiful Selina (Lena Horne). She entertains the crowd with a great song and Bill has a wonderful time dancing the Cakewalk with her. 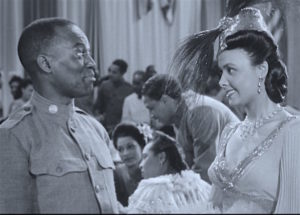 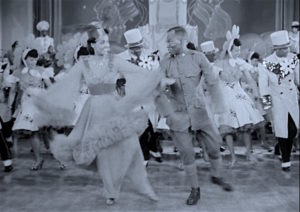 “–How do you spell US? –U! S! –You leave off the S and worry about you. Every time you start to promotin’ that spells trouble!” –Bill and Gabe

After his exciting visit to New York, Bill goes back to his old peacetime job on a Mississippi cotton boat. He grows weary of the hard labor and takes a job as a waiter at a club on Beale Street in Memphis. His bosses at the club are Ada Brown and Fats Waller. Selina and her successful mentor Chick Bailey (Emmett “Babe” Wallace) visit Bill’s club. Chick is looking for talent for a show he’s putting together in Chicago. At first Selina doesn’t remember Bill, but eventually Bill ends up going to Chicago for the show.

Chick doesn’t like Bill and only tolerates him in the show for Selina’s sake. Chick stars in a big jungle production number, surrounded by chorus girls dressed as zebras. Behind Chick’s back, Bill seizes his chance by dancing on the drums on the set. Even though the audience loves Bill, Chick fires him from the show. 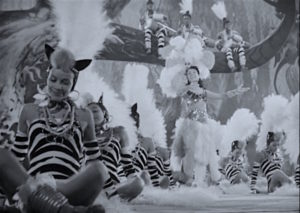 “–Oh man, it doesn’t look like there gonna be no show! –How come? –All the chorus girls ganged up and refused to work unlessen they get paid for last week’s rehearsal. …–Now you listen to me. If you look prosperous and sweet talk them gals, they’ll be so busy figuring out how to make you spend what they think you got, that they ain’t got no time to worry about how much money you ain’t got!” –Bill and Gabe

Bill turns lemons to lemonade by going to Harlem and putting on his own show. He finds his old friend Gabe again. Gabe hatches a plan to help Bill open his show, even though he is $560 short. Selina shows up to see the show and support Bill. Finally they click romantically. 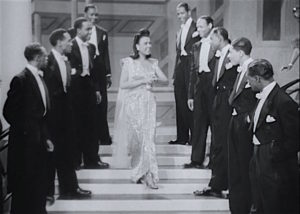 The happy times don’t last very long. In 1936, Bill goes to Hollywood. He wants to settle down with Selina, but she doesn’t want to quit show business. Soon after this, she leaves him and goes to Paris.

During World War II, Cab Calloway visits Bill at his home. He invites him to perform at a benefit for soldiers. Bill agrees, not realizing that Cab has a big surprise up his zoot suit: Selina is in the show! Bill finds his true love again.

“Say, this cat ain’t hep to the jive. Stop beatin’ up your chops to him. –Now ain’t that a bring-down! That’s a wrong riff, Jack. –Say, what in the devil are you two fools talking about? –We’re talking jive!”   –Cab, Gabe, and Bill

Enough cannot be said about Helen Rose’s costumes for the film, which represent an elegant timeline through the years between the two World Wars. Only someone with Lena’s panache can do these outfits justice: 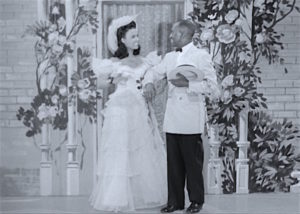 Cab Calloway also makes a definitive fashion statement in this film. He may be wearing THE quintessential zoot suit. His shoes appear to be yellow, his hat brim is a yard wide and his watch chain reaches below his knees. 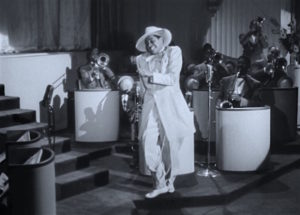 The music for the film is a real treat and preserves performances from many entertainers. Lena Horne sings No Two Ways about Love, Diga Diga Do, I Can’t Give You Anything But Love, and Stormy Weather. She sings the last song with such emotion that she actually sheds tears. Katherine Dunham, the modern dance pioneer, provides a dance sequence for Stormy Weather. 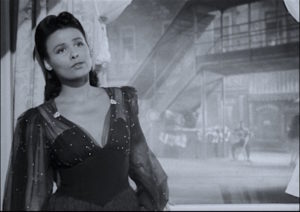 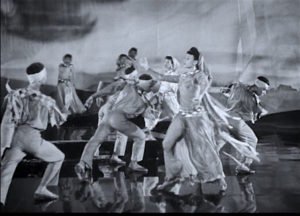 Fats Waller performs his trademark Ain’t Misbehavin’. Baby, Baby, What’s the Matter With You is sung by Ada Brown. Mae E. Johnson gives a spirited rendition of I Lost My Sugar in Salt Lake City. Cab Calloway and his orchestra perform Old Geechee Joe and Hep Hep. The Nicholas Brothers (Fayard and Harold) join in the fun on Hep Hep looking so elegant in white tie. Bill Robinson’s big number is Ain’t That Something to Shout About. 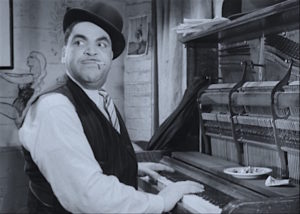 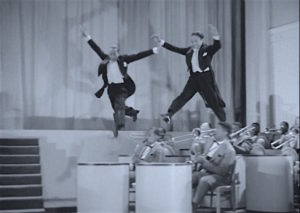 Stormy Weather is an entertaining movie that is a wonderful legacy for black performers, with its ensemble of so many fabulous entertainers. Lena Horne turns in a superstar performance that is unforgettable and made her song Stormy Weather an American standard. 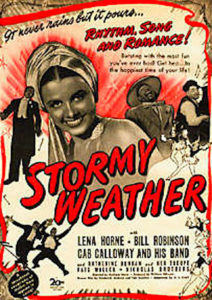