You are here: Home / Culture / Lisa’s Home Bijou: The Spirit of St. Louis

The Spirit of St. Louis, directed by Billy Wilder and starring Jimmy Stewart, gives us a chance to learn more about Lindbergh’s heroic flight. Charles Lindbergh is one of the world’s most famous aviation pioneers. We studied about his daring non-stop crossing of the Atlantic Ocean in school, but we didn’t learn many of the details.

The Spirit of St. Louis is the life story of a Minnesota boy who becomes an international hero. It’s a story of determination, flying skill, ingenuity and teamwork.

Charles A. Lindbergh (James Stewart) is known as Slim to his friends in Little Falls, Minnesota. As a young man he travels to Brooks Field in Texas to become a flying cadet. 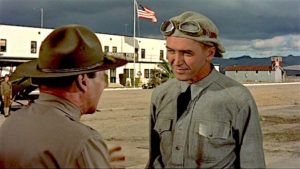 Slim learns that flying is in his blood, so he decides to get a plane of his own. He trades in his blue Harley-Davidson motorcycle for a World War I Army surplus “Jenny” and makes a living by charging people $5 each for 10-minute plane rides. 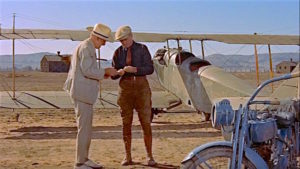 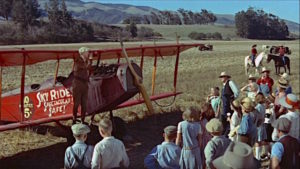 “Who wants to kiss his girl in the clouds? How about that? I tell you, folks, this machine here is absolutely safe and completely dependable. It’s made thousand of flights without one single mishap!” — Slim

Slim and his friend, Bud Gurney, become stunt fliers in a circus in Abilene, Texas. They entertain the heartland folks by spouting colored exhaust, turning loop-de-loops, wingwalking and parachuting. 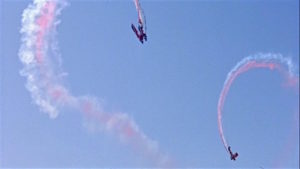 “How long can you fly these old wrecks and stay alive? The company ought to get you some real airplanes, fix up the landing fields, set beacons out along the way. –Good idea. Want to lend us some money? The bankers won’t. They don’t believe in commercial aviation.” — Bert and Slim

After a stint with the circus, Slim takes up piloting for the experimental airmail service. His plane is a De Havilland, and he’s assigned the Peoria to Chicago route. One night he has to take off in a blizzard to meet the mail schedule, but the storm proves too much for him to handle. In a tense but thrilling scene, Slim bails out while the crashing plane spirals around him. 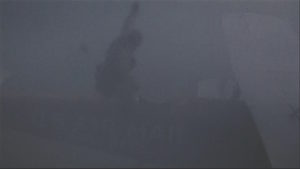 “What’s for you? –Well, a couple eggs over, toast, no butter. — Ground loop two and hold the grease gun.” –Louie and Slim

Back in New York, a hotel owner offers $25,000 to anyone who can fly nonstop between New York and Paris. Slim believes he can do it, even though six flyers have died attempting the crossing. He calls Columbia Aircraft to buy a Balenka. When he finds out he needs $15,000, Slim organizes an investment group in St. Louis to raise the money, convincing them that a solo flight in a single-wing, single-engine plane is not a completely foolish enterprise. 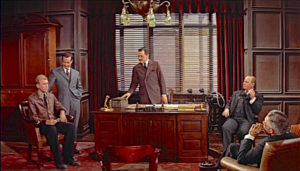 The St. Louis group raises the money but then Slim discovers that Columbia Aircraft wants to choose their own pilot for the trip. Dejected, Slim takes a trip to San Diego to see if Ryan Airlines could build the aircraft he needs. 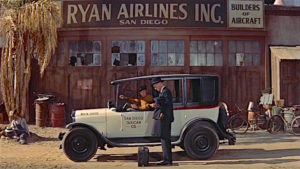 Ryan Airlines is housed in a fishy-smelling warehouse. Slim meets the owner, Frank Mahoney, while he’s cooking sand dabs with a welding torch. Along with aircraft designer Donald Hall they concoct a lightweight plane with no radio, no sextant and a gas tank in front of the pilot. A periscope is rigged up so that Lindbergh can see in front. Ryan Airlines finishes the plane, now known as the Spirit of St. Louis, in 63 days. 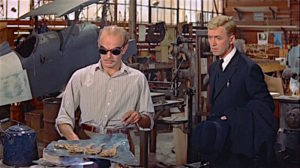 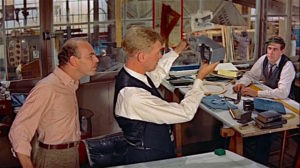 “Come on now, go to sleep. Cut your motor out, let it rest now. Maybe I should’ve spent the night in the hangar. Maybe that’s what’s keeping me awake. Maybe I should be with her out there on Roosevelt Field.” — Slim

Slim flies the Spirit to Roosevelt Field in Long Island on the first leg of the trip to Paris. The distance to Bourget Field is 3,610 miles. Roosevelt field is horribly wet, the air is damp, and the plane has never been tested with so much fuel aboard. In spite of it all, Slim gets her off the ground and heads towards Paris. 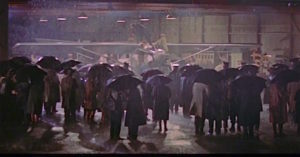 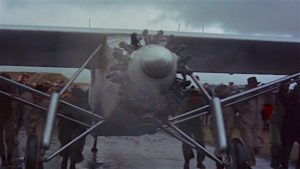 Can one man fly from New York to Paris nonstop?

Because the film is so suspenseful, you forget that you already know how the story ends. You can’t help but admire and honor the human courage the story documents. Jimmy Stewart is an ideal choice for Lindbergh: his hair is dyed blond, he’s got the “Lucky Lindy” cowlick, and he looks believably young. The 1920s musical soundtrack includes “Rio Rita” and “Baby Face.” Another nice bonus is that footage from actual newsreels is incorporated throughout the movie.

San Diego has a special tie to Lindbergh’s flight because it was the home of Ryan Airlines (later Teledyne-Ryan) — the company that built the Spirit of St. Louis in 63 days for $10,580. Although the buildings are gone, the history was carefully documented with Historic American Building Survey standards. 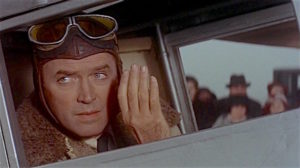 Related Links for The Spirit of St. Louis