THE GREAT 1906 San Francisco earthquake and fire is one of the defining events in 20th century American history. The 1936 film San Francisco connects faces with some of the stories of the earthquake, from the wealthy owners of mansions up on the hills, to the politicians who worked in the beautiful City Hall, to the earthy folks from the markets and beer halls along the Barbary Coast.

The tremendous physical devastation that resulted was only part of the tragedy — there was a great human toll, and a story for every person who lived behind each destroyed building. San Francisco takes us to the rough-and-tumble days of San Francisco at the beginning of the 20th century. In the words of the film’s screenwriter, Anita Loos, the opening trailer proclaims the city to be “splendid and sensuous, vulgar and magnificent, perishing suddenly with a cry still heard in the hearts of those who knew her” on April 18, 1906.

The story begins on New Year’s Eve, 1905, as the whole city was in celebration. There may be champagne in the fountains, but fires are breaking out in the tenement apartments along the Barbary Coast. Blackie Norton (Clark Gable) makes his way through the crowds of revelers and enters his Barbary Coast music hall, Norton’s Paradise, where the joint is jumping. A gang of chorus girls led by Trixie (Shirley Ross) is on stage, singing goodbye to 1905. A Mrs. Firestone and her “party of swells” are enjoying the show and asking for Blackie. Mat (Ted Healy) sings “The Gang’s All Here” and the band follows with “After the Ball.” 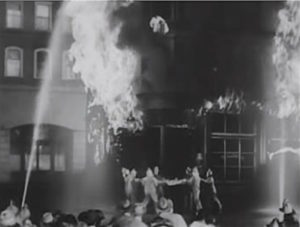 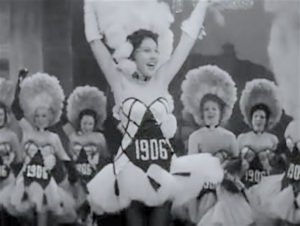 Into all these festivities comes a lovely but timid young woman, Mary Blake (Jeanette MacDonald). Mary is looking for a singing job at the Paradise, desperate because she’s lost her home in one of the fires. Mary auditions for Blackie and he offers her $75 a week for her fine set of pipes. The combination of the stress she’s suffered and her sudden good fortune causes her to faint. 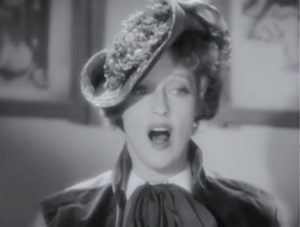 Mary is a very proper and ladylike young woman whose late father was a country parson. She has come to San Francisco from Colorado. Blackie allows her to spend the night on the sofa in his suite above the bar, laughing at her lack of sophistication.

“–Where are you going? –I don’t know. –Now wait a minute wait a minute you don’t have to stall me, honey. Well, you know I wrote that old spiel you just pulled. Parson father, sacrificing mother, the whole thing years ago. I guess you got some John on the street, is that it? –Please let me go!” –Blackie and Mary

The next morning, Blackie spars at the neighboring gym with his childhood buddy, Father Tim Mullin (Spencer Tracy). Mat comes by, interrupting the workout to inform Blackie that Mary is late for rehearsal and that he has some important visitors back at the bar. A group of businessmen have come to see Blackie about running for city supervisor. They know that he’s been concerned about the Barbary Coast fires and that he wants to improve his part of the city. Mary arrives to rehearse, and they all listen to her sing while having a drink at the bar. 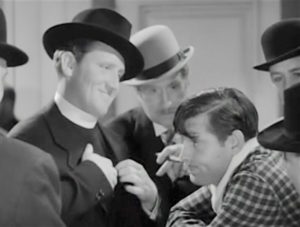 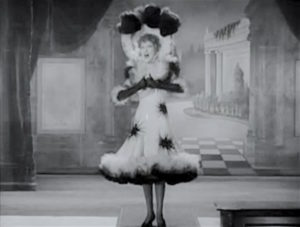 “San Francisco
Open your Golden Gates
You let no stranger wait
Outside your door
San Francisco
Here is your wandering one
Saying I’ll wander no more.” –Mary sings

That night Jack Burley (Jack Holt) comes to the Paradise to warn Blackie away from city politics. Jack is one of the richest men living on Nob Hill, an exclusive San Francisco neighborhood, and is also a Barbary Coast property owner. Blackie wants Burley to clean up his properties to make the area safer. Burley’s reply is that the Coast is picturesque enough, and that his lack of care keeps the rents low. During the discussion Mary appears on stage and is a big hit with the audience. Burley wants her to try out for the Tivoli Opera House but she can’t — Blackie has her locked into a two-year contract. After the show, Blackie sends Mary to sing at Father Tim’s mission. Father and Mary have a little chat after her angelic performance during the service.

“You’re in probably the wickedest, most corrupt, most godless city in America. Sometimes it frightens me, I wonder what the end is going to be.” –Father Tim 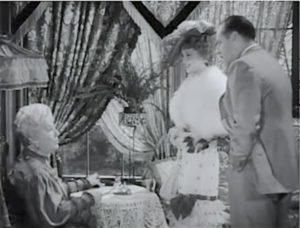 What is the end going to be? Will the goodness of Father Tim and Mary influence Blackie to want marriage, family, and a respectable life? Will Mary end up with Jack Burley and his mother Maisie (the unforgettable Jessie Ralph), living on Nob Hill and singing opera at the Tivoli? Will Burley destroy Blackie’s Paradise and add it to his holdings? All these questions become moot when chandeliers begin to shake and brick walls begin to crumble in the early morning hours of April 18, 1906.

The scenes of the earthquake, the ensuing fire and the aftermath are wonderful examples of the special effects artistry of A. Arnold Gillespie and James Basey. This segment is a must for special effects aficionados. The destruction of the city is so realistic and so faithful to historical documentation that it looks as if the filmmakers shot the actual earthquake on location.

San Francisco is a film that will please many different movie going tastes, with Jeanette MacDonald’s beautiful soprano voice, the chemistry between Clark Gable and Spencer Tracy, and the horrible and fascinating devastation of the magnificent City by the Bay.