The Postman Always Rings Twice (1946) stars Lana Turner, John Garfield, Cecil Kellaway, Hume Cronyn and Leon Ames, each character having a depth of meanness and corruption you don’t initially expect. The chilling situation underlying the story: Have you ever befriended someone new because they seem just as nice as you are, but when you get to know them better you find out that they operate with a completely different value system, or with no value system at all? Mix them all together in a small town in rural southern California, and you have a dark, disturbing story.

The moment that Frank (John Garfield) steps out of a car that he’s hitched a ride in, a series of irreversible events is set in motion. Frank takes a job at Twin Oaks, a luncheonette and filling station owned by Nick and his young wife Cora (Kellaway and Turner) in the center of an orange grove on the coast road between Los Angeles and San Diego. 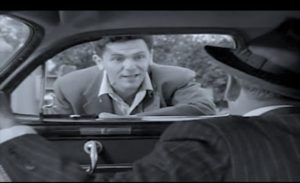 “Well so long, mister. Thanks for the ride, the three cigarettes, and for not laughing at my theories on life.” — Frank

Cora has a fresh, young, innocent face and her clothes are pure white. We can see that she is no Barbara Stanwyck; there is nothing sinister going on behind those eyes. She just wants to have a good life, and is willing to work hard to fulfill her ambitions. But as soon as Frank and Cora make contact, something dangerous ignites between them – something that’s obviously missing between her and Nick. 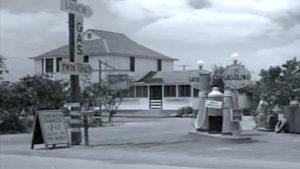 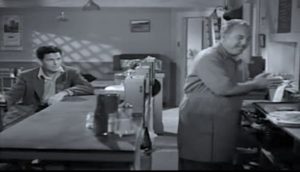 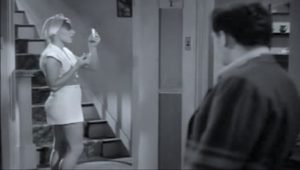 “The best way to get my husband to fire you would be not doing what I tell you to do. –You haven’t asked me to do anything… yet.” –Cora and Frank

Her husband, Nick, is a simple fellow; jovial but rather coarse, and quite a bit older than Cora. We soon learn that he and his young wife have little in common; he treats her like a possession instead of a partner, and likes to gets rip-roaring drunk.

“I could sell anything to anybody! – That’s what you think.” –Frank and Cora 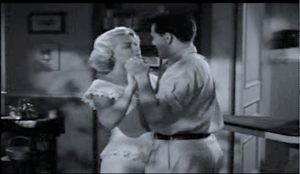 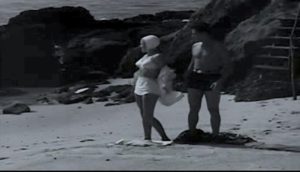 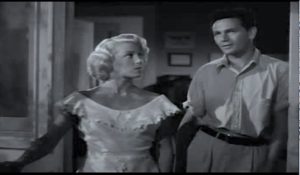 Frank is a drifter, flitting from job to job, and always complaining that his feet are itching to get back on the road. As the passion rises between Frank and Cora, their lust colors everything they do and, step by step, inspires them to the ultimate treachery: they decide to engineer an accidental death for Nick so that the two of them can be together. I won’t give away more of the film, but there is no happy ending for anyone, and irony rules the day.

“Where are we headed? –What’s the difference? Anywhere! –Oh anywhere, anywhere, do you know where that is? –Anywhere we choose. –No it isn’t. It’s back to the hash house for me and for you some parking lot where you wear a smock with “super service” on it. I would just die if I saw you in a smock like that!” –Cora and Frank 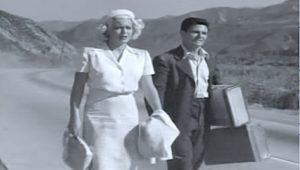 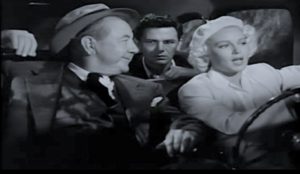 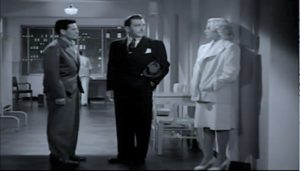 A few notes about this film:

Beware of junk food cravings while watching. Much of the action happens at the luncheonette while Cora and Frank serve hamburgers and beer to the customers. You just might want to fire up your grill halfway through the movie in preparation.

“Oh, do you like lemon meringue pie? –Well, I don’t know… –I’ll make you some tomorrow.” –Cora and Frank

About some of the actors: Cecil Kellaway (Nick) is a familiar character actor. Perhaps his most famous role is as Dr. Chumley, the psychiatrist who treats Jimmy Stewart in Harvey. Leon Ames (District Attorney Kyle Sackett) is a veteran character actor. He was the father in Meet Me in St. Louis, appeared regularly on the Mister Ed TV series, and played Doris Day’s father in the Moonlight Bay movies. 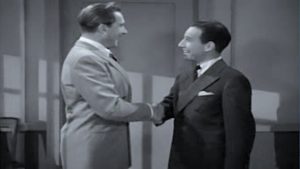 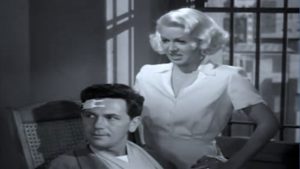 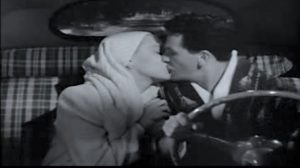 Oh, the meaning of the title, The Postman Always Rings Twice, is revealed in the last five minutes of the film, but we won’t spoil it for you here.