Paradise, Hawaiian Style (1966) stars Elvis Presley as a womanizing pilot who launches the idea of helicopter tours in the Hawaiian islands. It is one of the three films Elvis made in Hawaii and the aerial photography of Oahu and Kaua’i are just stunning. Are Elvis and the plot stunning? Well… 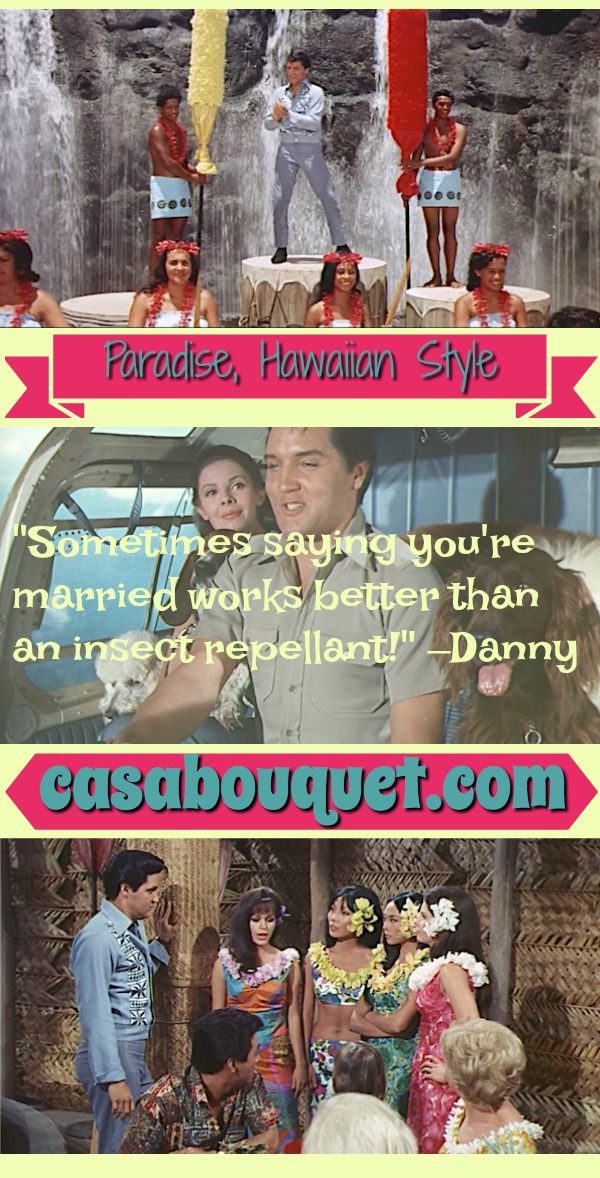 The film opens with Rick Richards (Elvis Presley) flying in first class on a plane in his pilot’s uniform. He’s been fired from a major airline and can’t get a job because of his woman-chasing ways. 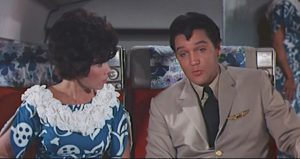 Rick meets up with his friend Danny (the great James Shigeta) who owns a charter air service. They call each other Missionary and Native. He can’t give Rick a job because he doesn’t have enough customers to feed his family of 5 children. 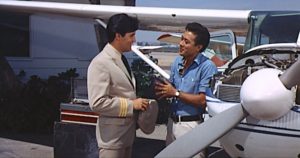 The rest of Paradise, Hawaiian Style revolves around Rick managing to get access to 2 helicopters and starting an inter-island chopper service with Danny. His business philosophy is “I’ll scratch your back, and you’ll scratch mine.” He builds the business by meeting up with all the young ladies he knows that work as concierges at the resorts.

“We figured out a way to scratch each other’s backs. I sold him on going into partnership with us. He scratches our backs by putting up the choppers, we scratch his by putting up the service. –What kind of service? –A personal air service. Look, we both know these islands, Danny. We could use the choppers to fly tourists to places they could never reach by any other means of transportation!” –Rick and Danny

Jan (Donna Butterworth), Danny’s little girl. Rick enjoys playing with Danny’s children and he sings a spirited song with Jan, Queenie Wahine’s Papaya. Jan sings another song with Rick, Datin’, while he flies her in a chopper over to Kaua’i. Jan has a big solo number with Won’t you come home Bill Bailey, which she sings at the Polynesian welcoming festival at the Polynesian Cultural Center. Rick’s relationship with Jan may be his best. 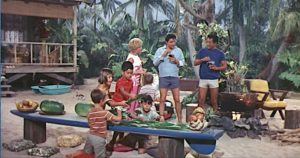 Lehua. Rick joins Danny on a charter flight with a client who sells alligator shoes headed to Maui for a convention. They land on Maui and Rick spots Lehua working at concierge desk in resort. She’s mad because he stood her up two years ago. He tries to convince her to help book passengers for their new helicopter charter service. 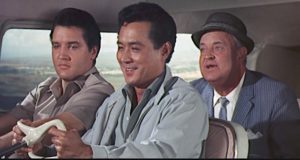 “Aren’t you a little late? –We had a date, remember? –How could I forget. When? –For dinner, June 4th, two years ago. –And you’ve been waiting all this time? You must be starving! –Not anymore. I ate my heart out for a day or two.” –Lehua and Rick 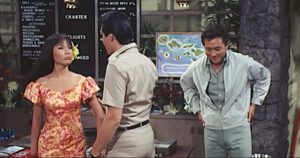 Lani. Rick gets excited when he has to fly a client to Hanalei Plantation on Kaua’i because he knows Lani there. Rick sells Lani on the charter idea. Lani sings and dances at the club Piki Niki and includes Rick in One good turn deserves another. 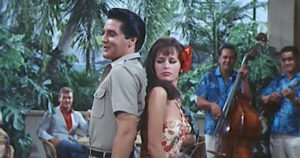 Later, Rick has to pick up a couple in Kaua’i so he offers to take Jan with him to swim at Iron Kettle, an outdoor café at the beach. When they land at Hanalei Bay, they meet Lani and her father.

“You come back to marry my daughter? … My ancestors had the right idea. If a young man didn’t want to marry your daughter, you dipped him in coconut butter and threw him into a volcano.” –Lani’s father

Lani and Rick plan to fly for a picnic with Jan. Rick grabs a guitar and sings Sand Castles to the pretty girls on the beach before they take off. 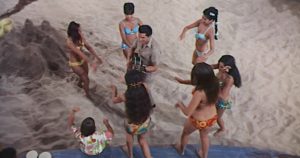 At this point there is fantastic aerial photography of Waimea Canyon. Lani, Rick, and Jan go snorkeling at Moonlight Beach (they are actually at Kualoa Regional Park with a great view of Mokoli’i island.)

Lani hides the chopper keys so they can’t leave. She really wants more time with Rick. They spend hours searching for the key in the sand. Danny ends up being so angry about Rick keeping Jan out all night and they’ve lost all their customers for the day. He dissolves the partnership.

Pua. Pua is a tour guide at the Polynesian Cultural Center at Laie on the North Shore of Oahu. Rick flies the copter over the center. All the college students working there are dancing and singing Pupu A O ‘Ewa (also sung in Donovan’s Reef!). 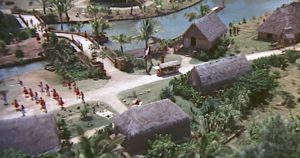 Bula Maleya, a song from Fiji, which says hello to Fiji and Malaysia, became Drums of the Islands for Elvis. He sings it while he’s riding with Pua in an outrigger. 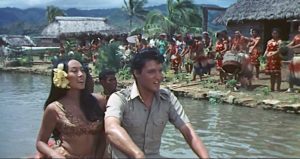 The outrigger passes through all the Polynesian “lands” at the center and we see dances for each. As they pass Hawaii, there are men and women doing hula with uli uli (gourd rattles with feathers) and pu’ili (split bamboo sticks).

Joanna. Rick takes a job that involves a client paying a lot of money to fly a set of show dogs uncrated! He flies to the Kahala to meet with Joanna (near Diamond Head on Oahu). She rides with him with the dogs. 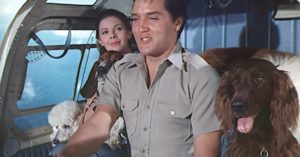 He sings A Dog’s Life to the 4 dogs and Joanna. The dogs go crazy and he tries to get control of the chopper over a pineapple field. He ends up running a car off the highway. The driver is from the Island Aviation Bureau. The dogs emerge upon landing all bandaged up from fighting with each other. Joanna is pretty dinged up too!

Judy (Suzanna Leigh). Rick advertises for a Girl Friday to run the new office of Danrick Airways. Danny’s friend Judy loves to fly. Danny loans her a wedding ring for her interview with Rick.

Judy gets the job managing their office. She ends up being a stable and beautiful part of Rick’s life. 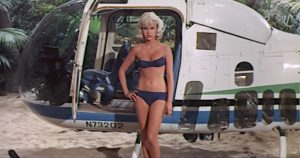 At the final luau at the Polynesian Cultural Center, Rick spots Lani with a date. Pua and Lehua show up with dates too! Rick is trying to avoid them. Finally, Joanna arrives also. Rick is dragged on stage with Tahitian dancers. He sings Stop Where You Are. 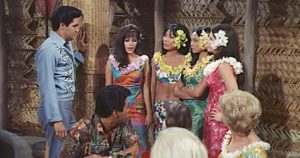 Outside, the Pacific islanders are putting on a big show of dances from the island nations, including Samoan slap dance (Fa’ataupati).

Rick reveals that he knows Judy is actually single and he commits to her by joining a hula on stage, singing This is My Heaven. He rocks the pu’ili bamboo rattles. Then the finale is Drums of the Islands and he joins each national group and plays instruments. Then he jumps on a giant drum! 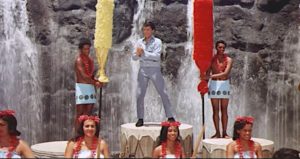 Starting with the Paradise, Hawaiian Style opening credits song, Hawaii USA, Elvis is in fine voice but the songs don’t have a clear style. I think of what the Beatles and Beach Boys were doing in 1966 and these songs sound more like Las Vegas floor shows. Elvis isn’t given a lot of acting to do, but he flirts well with all the girls and he looks like he could be flying the helicopter.