Panama Hattie (1942) was a hit Broadway play with songs by Cole Porter, starring Ethel Merman, and getting laughs through the unusual casting of 3 comedians as sailors. The play got the Hollywood treatment as a vehicle to support wartime vigilance for spies and raising money through war bonds. Ann Sothern, Red Skelton, Virginia O’Brien, and Lena Horne lead the list of peppy performers looking for love and spies in the Panama Canal Zone.

The film opens with a big floorshow in Phil’s Place, the nightclub in the Panama Canal Zone. The club is full of sailors ready for a good time. Hattie Maloney (Ann Sothern) comes out and sings a sassy song, I’ve Still Got My Health. She is a vision in ruffles, sequins, and feathers. 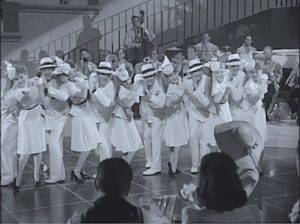 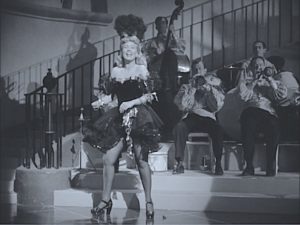 “Your face is your fortune / so some wise man spoke / My face is my fortune / That’s why I’m always broke!” – Hattie

The Berry Brothers come out as a specialty act, tapping with canes to Berry Me Not. They are amazingly athletic and the dance includes a spectacular leap from the 2nd floor balcony! (The Berry Brothers once competed with the Nicholas Brothers in a Cotton Club dance-off.) 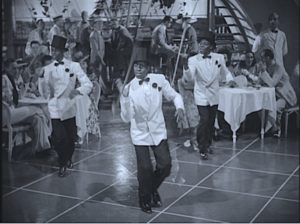 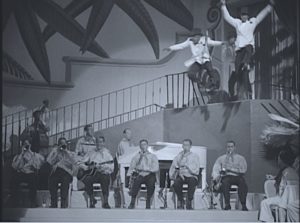 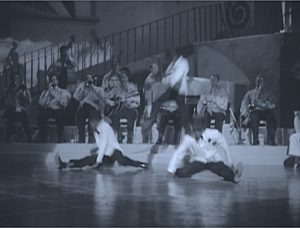 “Now when I left Indiana and landed in Panama, I thought it was the biggest mistake of my life. But it turned out it wasn’t. –Well, you met us. –Yeah, I met you. You’ve been regular pals. The only break I ever got I got right here in this town.” –Hattie and Rags 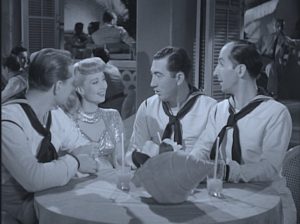 Hattie is in love with a soldier named Dick. She is worried it won’t work out because he has an 8-year-old daughter and he is from a Philadelphia society family (We used to call this Main Line society – Grace Kelly was a famous debutante.)

Dick Bulliard (Dan Dailey) has two weeks leave. He has rented a bungalow to stay with his little girl, Geraldine, and spend more time with Hattie. Geraldine arrives on a cruise ship accompanied by her butler, Jerkins. Leila (Marsha Hunt), a beautiful society lady arrives on the boat, too. She’s the admiral’s niece. She seems very interested in Dick.

Hattie is very concerned about getting to know Geraldine. If the little girl likes her, her relationship with Dick can move forward. She dresses to meet Geraldine in full Panama Hattie gear, an outfit full of feathers, flounces, and bangles. 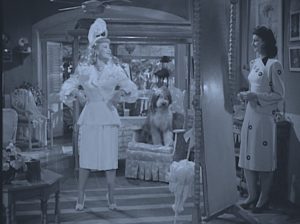 That night at the club, Lena Horne sings It was just one of those things. She is beautiful, as always, with 3 camellias in her hair and diamond clip earrings. 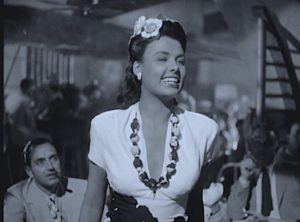 Jerkins the butler goes into the bar to drink his sorrows away. Rags goes there to talk to the bartender about Hattie falling off wagon. Jerkins has a message for Hattie to meet Dick and Gerry in the morning.

The next morning Hattie and the sailors eat breakfast to try to get over their hangovers. They eat Chinese food and eggs (actually, there are lots of Chinese immigrants in Panama). Flo joins them and asks to go along to the meeting with Dick because she has fallen for Jerkins. She sings Fresh as a Daisy to announce her feelings. 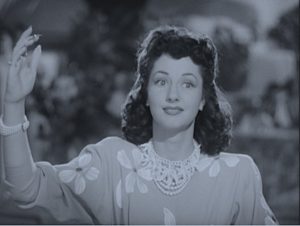 A waiter brings a note to Dick. He’s Joe Yule, Mickey Rooney’s father! Leila wants to meet with Dick and Hattie. Leila manages to insult Hattie in a very ladylike way. Meanwhile, the sailors meet 3 lovely señoritas and sing Good Neighbors to them. 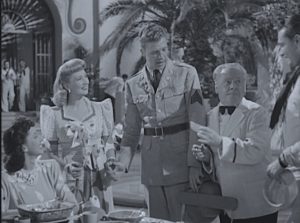 “Franklin D. signed a decree starting the Good Neighbor policy / That means that we have got to be pals with all you Central American gals” –Red, Rags, and Rowdy

Hattie and Gerry take a walk in the tropical garden of the bungalow. Gerry still thinks Hattie dresses too clownish. Gerry snips decorations off her dress. She also shows her how to walk like a lady. As they get friendly, Hattie sings Let’s Be Buddies. Flo sings to Jerkins. 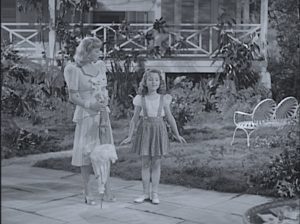 “What say / Let’s be partners / Like water and fishes / Movies and dishes / We’d be delicious!” –Flo

There’s a big mixup with secret notes: one is a spy plot, one is Red trying to keep Leila from messing up Hattie’s chances with Dick. Leila goes to Hattie’s dressing room and tries to warn Hattie off. She explains that Hattie would hold him back in his career and they are from two different spheres of society.

The sailors figure out that notes have gotten mixed up and one of the waiters is a spy. The boys hatch a plan to go to the rendezvous at a haunted house and catch a spy.

“Ah, that’s strictly for stenographers. I couldn’t go for that little white house with the little green blinds. Uh uh. Brass brands, plenty of smoke, and a room full of suckers. That’s my department.” –Hattie

Hattie is packing to go away. The boys offer to share the spy-catcher reward money with her. She is determined and they all are sad.

The sailors go to the haunted house that night. They find a big chemical lab set up and figure it’s for explosives. They find two spies and alligators and guns firing and secret doors. The house blows up just as they escape.

Back at Phil’s Place, a spectacular bar fight starts when Hattie gets mad at Leila’s friend Keppler. A large contingent of sailors fight with staff and guests. Hattie and Flo take off for the boat to New York. Jerkins tells Dick and Gerry and they run for the docks.

Red, Rags, and Rowdy end up in jail and get released to a big celebration when the guys they beat up are found to be spies. Flo sings Boy did I get stinkin’ at the Club Savoy. The Berry Brothers and Lena Horne perform The Sping in Panamanian dress. Lena has a conch shell on her hat! The Sping is a dance that is a mixture of all the Caribbean rhythms. 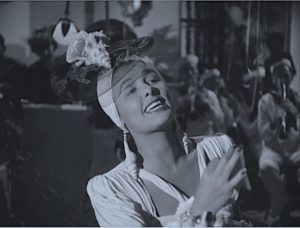 Hattie, Gerry, and Dick show up, and they are married. Leila has to make do with Red.

The Sun of a Gun Who Picks on Uncle Sam is the big number at the end with everybody singing. It’s a pure wartime rally song talking about beating the Axis powers.

Panama Hattie is escapist fare. There’s not much of a plot, but plenty of enthusiastic singing, dancing, and comedy bits. It’s a great glimpse of 1940s wartime entertainment.

In the old days, they used to give out china when you went to the movies. Each week would be a different piece, so you could build a whole set if you went a lot. My mother collected these and it’s a precious memory of my childhood.