THE DRAMATIC DIFFERENCE in elevation between San Francisco‘s Barbary Coast and Nob Hill has long been symbolic of the distances between the social classes in that city. In 1957’s Pal Joey, we join Frank Sinatra in his attempt to make the climb from the Coast up the Hill.The Barbary Coast had clubs and cabarets appealing to people from all walks of life, providing opportunities for entertainers new in town. Nob Hill (some say the name is derived from “Nabob”) had the mansions, fancy hotels and restaurants for those who acquired wealth and social standing. 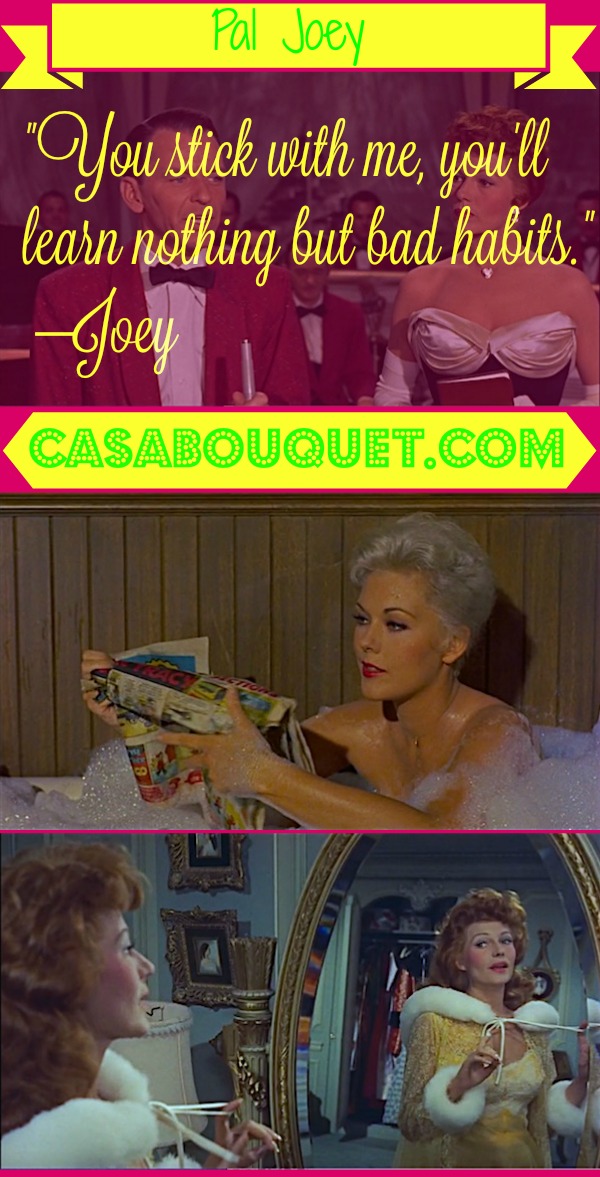 Pal Joey takes us backstage into the life of a small-time crooner who makes a career drifting through the martini lounges of California. We first meet Joey Evans (Frank Sinatra) as the police drop him off at a train bound for San Francisco. He’s been caught buying a drink for an underage girl in his hotel room. Once he arrives in the City, Joey wanders up and down the streets of the Barbary Coast looking for a singing job. It doesn’t look very promising; most of the clubs feature girlie shows. Finally, he spots a marquee for Ned Galvin and his Galvinizers, a name he recognizes. 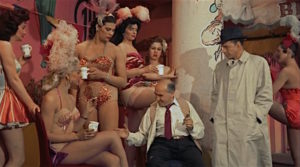 Inside the club, the floor show is in progress. The girls come on stage singing “I’m a Red Hot Mama.” Being a ladies man, Joey likes the look of all the girls, but he particularly notices a cool blond, Linda English (Kim Novak.) The emcee is missing from the club, so Joey jumps on stage to fill in, taking this opportunity to sing “I Didn’t Know What Time it Was.” After the song, he promises the owner that his many fans will help fill the club. Joey gets hired on the spot as the new emcee. 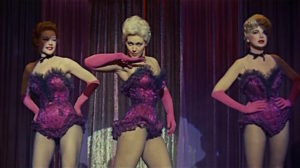 After hours, as the show staff eats dinner in the club kitchen, a customer calls asking to hire the entertainers for a Nob Hill soiree. The event is a dinner dance and auction to benefit the Children’s Hospital, held at the home of Mrs. Prentice Simpson (Rita Hayworth.) At the event, Joey entertains the dancing guests by singing “There’s a Small Hotel.” During the song, Joey and the hostess become very aware of each other. Once the song ends, Mrs. Prentice Simpson takes the mic and starts the auction, ultimately raising $17,500. Joey takes the mic from her to up the ante. He reveals to the society crowd that their hostess is none other than the former Vera Vanessa, a high-class stripper. Joey offers up Vera herself for auction, to do her act for the crowd. Sold for $5000! All in the name of charity, Vera does her old act, “Zip,” which electrifies her guests. 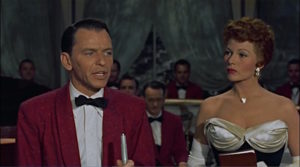 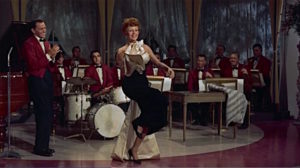 The Barbary Coast Club gang rides home on a cable car at dawn. Ned gives Joey $20 to find a place to stay. He finagles a boarding-house room next door to Linda’s. Later at work, the owner asks Joey when the big fan following he talked about at his audition will be arriving. Joey sings “How to Make Two Lovers of Friends” and grabs Linda out of the chorus line to make a romantic act out of the song. However, his scheme with Linda in real life is to act indifferent and dismissive towards her to get past her suspicions of him. 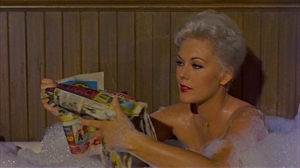 Suddenly, Vera arrives at the club trailing a large party. Joey promises the owner that the club will soon be strictly “carriage trade.” Joey sits at Vera’s table and floats an idea for his own intimate club. She suggests the name “Chez Joey.” Quickly bored, Vera and her friends leave as suddenly as they came. The owner fires Joey, but agrees to hire him back on the condition that Vera and her high-rent friends come back to the club by Saturday.

Joey says his goodbyes to all the gang at the club, boasting that he’s off to the big time at the El Morocco in New York. Vera, alone, knocks on the club’s door. They reopen just for her, and the band goes back on stage to accompany Joey as he sings “The Lady is a Tramp,” a not-so-subtle dig at Vera. 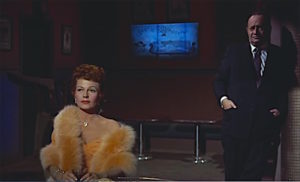 “Won’t have a dice game with any barons and earls
Won’t go up to Harlem dressed in ermine and pearls
Won’t dish the dirt with all the other girls
That is why the lady is a tramp!”

Vera is offended at first, then amused. She takes Joey to her yacht, berthed at the Marina. He talks up the Chez Joey idea with her. He makes a deal that he will give himself to her in exchange for her patronage. The next morning she wakes up very happy and in love. She sings “Bewitched, Bothered, and Bewildered” dressed in a knockout gold lace, satin, and mink negligee, designed by Jean Louis. Fashion-lovers will not want to miss this creation! 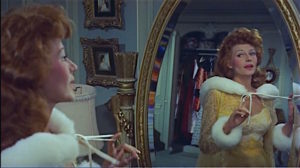 Joey finds himself torn by the triangle he has created. On one side, Vera holds the financial key to changing his life. She is the means to his own club on Nob Hill, to the finest clothes and jewelry, and to hobnob with the nabobs. On the other side, Linda holds the key to his long-buried generous nature and the possibility of true romance. With the help of more Rodgers and Hart tunes (“My Funny Valentine” and “What Do I Care for a Dame?”), Joey works out his destiny.

Fans of Richard Rodgers and Lorenz Hart will notice that this film features songs from several of the duo’s musicals. Pal Joey was produced on Broadway in 1940 and was considered too racy to film in its original form. The play was based on fictional letters from a dancer written by John O’Hara for the New Yorker. Gene Kelly became a star as the original Joey. With the lead transformed to a singer for the film, Frank Sinatra does a very good acting job, making this unsavory character sympathetic and even likeable. His rendition of “The Lady is a Tramp” is a tour-de-force. Also worth seeing is the dream sequence, with Rita and Kim dancing around Frank in black sequined catsuits. 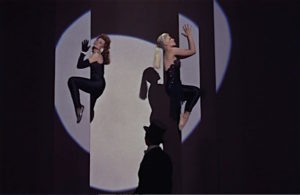 Pal Joey has great music with an atypical musical comedy plot. It’s a real treat to see these three great stars acting together. Pal Joey offers a dramatic look at the San Francisco of the 1950s — and the very human desire to move up from Barbary Coast to Nob Hill. 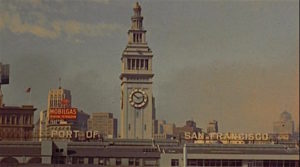