DANNY OCEAN (Frank Sinatra) and ten of his war buddies each find themselves bored with the pedestrian civilian life after World War II in Ocean’s 11. Pulling off a caper might just provide the thrill they need. 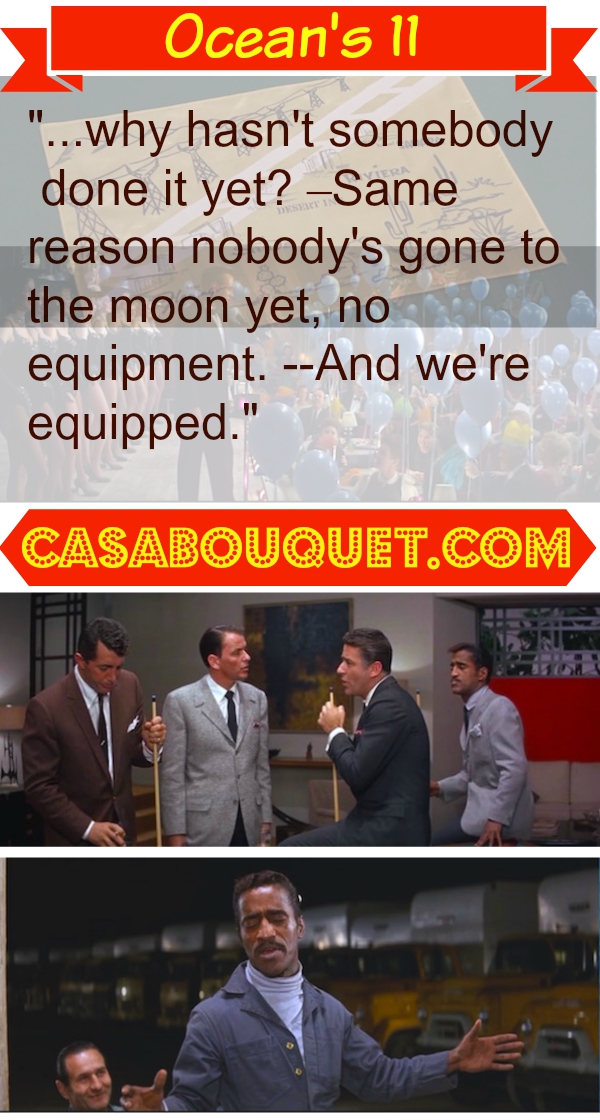 “Ocean’s 11” (1960) is the ultimate movie for fans of the Rat Pack — that well-known group of swank entertainers who hung out and worked together in Hollywood and the Las Vegas strip in the early 1960s. This movie, their first as a definitive group, provides a period view of Las Vegas — a landscape that, sadly, has been blown up or knocked down since this original version of “Ocean’s 11” was filmed.

As the film gets underway, fifteen years have gone by since the end of World War II. Danny Ocean (Frank Sinatra), hungry for action, determines that the expertise of his buddies from the 82nd Airborne Division should be used to get rich quick by performing criminal acts. During the Christmas season, Danny starts reuniting the men with the help of Spyros Acebos (Akim Tamiroff), the man behind the plan. Spyros meets Mushy O’Connors (Joey Bishop) in Beverly Hills. He is a nervous wreck, worrying that all the division members won’t be found and assembled.

“See, the whole point of having money is so that other people know that you got it. I’m gonna get me a big 50-foot Chris Craft and not even put it in the water. Just gonna leave it in the driveway. Maybe give it to the mailman or something like that.” — Peter Breimer (Norman Fell)

Danny Ocean and Jimmy Foster (Peter Lawford) are lounging around together, seemingly unconcerned about Spyros and his worries. Danny is separated from his wife and Jimmy is trying to keep away from his mother, a rich woman with a relentless parade of husbands. Her latest husband-to-be (the sixth) is Duke Santos (Cesar Romero), a real financial wheeler-dealer.

Danny and Jimmy take a road trip to look up their old buddy Vince (Buddy Lester). Vince works introducing strippers at the Burlesque Theater in Phoenix. His wife is “Honey Face,” the headliner. Danny and Jimmy can’t convince Vince to join the old gang in the scheme, since Vince can’t bear to spend any time away from his wife. But after a brawl with some very enthusiastic theater patrons, Vince suddenly finds himself free to join the meeting in Beverly Hills.

“What’s the word, Vince? We gotta catch a plane. –Danny, I never figured you’d go this route. –Vince, the plan is foolproof, take my word for it. You know I only lie to girls. –But, Jim, if it’s so foolproof, why hasn’t somebody done it yet? –Same reason nobody’s gone to the moon yet, no equipment. –And we’re equipped. It’s gonna be a military operation, executed by trained men. –Why waste all those cute little tricks that the army taught us, just because it’s sort of peaceful now?” Danny, Jimmy, and Vince

Another ex-GI, Roger Corneil (Henry Silva) pokes around an appliance shop in San Francisco looking for Tony Bergdof (Richard Conte), an electronics wizard. Roger finds out that Tony has been in San Quentin, doing one-to-five years, but he’s just been sprung due to some mysterious amnesty. Tony’s wife, Gracie, left him after he went to jail and placed their little boy Timmy in military school. Tony visits Timmy right after he leaves prison. Roger intercepts him there and signs him up for the reunion in Beverly Hills.

Vince finds Josh Howard (Sammy Davis, Jr.) working as garbage collector for the Las Vegas Sanitation Department. Josh’s dream was once to be a major league outfielder. But after the war, the only baseball job he could find was in Mobile, Alabama and that place just wasn’t very simpatico to black men. Once Josh hooks up with Vince, he happily joins the caper and his garbage truck becomes the linchpin for the entire scheme.

Danny’s closest friend is Sam Harmon (Dean Martin), a lounge singer who lives in Hawaii. While he’s on the mainland to participate in the big plan, Sam hopes to help patch up Danny’s marriage. The problem is that Danny’s wife, Bea (Angie Dickinson) would like to live an average married life, but Danny needs constant excitement and challenge.

“I want a life that doesn’t depend on the color of a card or the length of a horse’s nose.”–Bea Ocean

Once Danny and his ten Army buddies assemble at Spyros’ house in Beverly Hills, the plan becomes clear. Their objective is to liberate millions of dollars from five Las Vegas casinos on New Year’s Eve. Five of the guys work in the casinos that are the targets: the Sands, the Riviera, the Flamingo, the Desert Inn, and the Sahara.

Will Bea and Danny get back together? Why did the authorities let Tony out of prison? Why is he so anxious for his share of the profits? How many times will Sam sing his lounge song, “Ain’t that a kick in the head?” How can the gang control all the electric power for the Las Vegas Strip at once? Will Jimmy be able to hide from his mother? Is Duke Santos smarter than Ocean’s Eleven and all the casino owners put together?

Swing-a-ding-ding into “Ocean’s 11” and find out — and enjoy the lounge scene of yesterday’s Las Vegas at the same time.

When I visited Las Vegas I was disappointed because it was hard to find history there. It’s a place where demolition happens all the time and new is hot. I’m glad the Neon Museum and the Nevada State Museum and others are archiving the stories of the pioneers, Hoover Dam workers, mobsters, atomic engineers, and the colorful history of this area. My mother-in-law lived and worked there and was one of the special characters of that unique place. There was nothing like sitting next to her in a lounge show watching the showgirls and listening to her stories.