IN THE SUMMER of 1903, all that the people of St. Louis could think about was the upcoming Louisiana Purchase Exposition: the World’s Fair of 1904. This Fair (coinciding with the Olympics) would present the greatest that America — and the world — had to offer.

Forty years later when this musical was made, people would remember the 1904 St. Louis World’s Fair with affection and nostalgia as part of a happier, more innocent time.

If you will meet me in St. Louis, Louis/ Meet me at the fair!” – Esther and Rose

Vincente Minelli directed the charming “Meet Me in St. Louis (1944),” starring Judy Garland. Garland and Minelli fell in love and became engaged during the filming of this musical, based on true-life memoirs published in “The New Yorker” about a St. Louis family, the Smiths.

The movie begins in the summer of 1903, as the city of St. Louis is preparing for the World’s Fair. The scenes of day-to-day family life and the holidays they celebrate transport us back to the turn of the century.

“Poor Margarethe, I’ve never seen her look so pale. –The sun ought to do her some good. – I expect she won’t live through the night. She has 4 fatal diseases. –It only takes one. –But she’s gonna have a beautiful funeral, in a cigar box my Papa gave me. All wrapped in silver paper. –That’s the way to go, if you have to go.” –Mr. Neely and Tootie 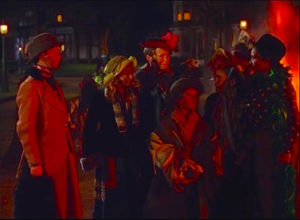 Halloween is grand fun (and one of the best Halloween scenes in the movies): the children dress as ghosts (or the undead) and their major goal of the evening is to play pranks. They throw flour at people when they answer the door and revel in building a bonfire. 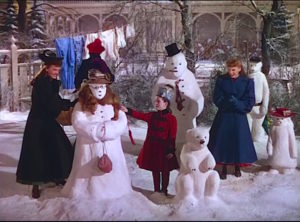 At Christmas, the three oldest children get ready to attend a Christmas Eve dance. In one amusing scene, Esther (Judy Garland) is attempting to don her first corset, and her sister, Rose (Lucille Bremer), tries to help her struggle into it. The family makes a snow family in the yard and Judy twists our hearts around her finger as she wistfully sings, “Have Yourself a Merry Little Christmas.” 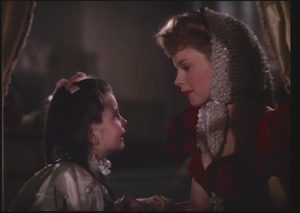 “—If Santa Claus brings me any toys I’m taking them with me. I’m taking all my dolls, the dead ones too. I’m taking everything. —Of course you are. I’ll help you pack them myself. You don’t have to leave anything behind. Except your snow people, of course.” –Tootie and Esther 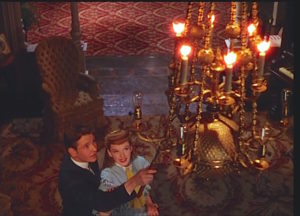 The art direction is impeccable and totally faithful to the period. Every little detail is present: the huge goldfish bowl on a stand in the parlor, the demi-lune stained-glass window in the attic bathroom, and the mechanical wind-up toys at Christmas; everything filmed in luscious Technicolor.

Irene Sharaff’s costumes are very elaborate and do a fine job of reflecting the Edwardian era. The colors are vibrant and there are ruffles, furbelows, velvets, silks, and laces to die for.

Three of the songs in the film are by Martin and Blane, while the rest are classic songs of the time: 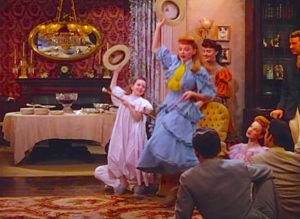 Margaret O’Brien and Judy Garland do a charming duet and cakewalk in “The Bamboo Tree.” In the song, Judy and Margaret wave their straw boaters: a classic scene. Judy is unforgettable as she jumps on the trolley to visit the construction site of the fair and belts out, “Clang, clang, clang went the trolley!” 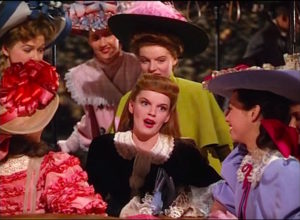 The 2011 Two Disc Special Edition of “Meet Me in St. Louis” includes a bonus: a trailer from the film and a documentary about the making of the movie. It’s fun to go behind the scenes to learn about the background of the story and hear about how Judy and Vincente Minelli fell in love.

Step back in time for a visit to kinder, gentler past with “Meet Me in St. Louis.” 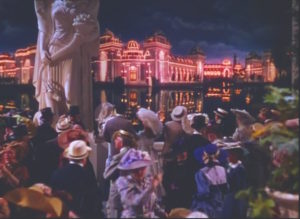 I’m a big fan of Judy Garland. She sings wonderful songs in this movie. I love the period touches and the sweetness presented. It’s fun to revisit times past: dance cards, gas lights, homemade ketchup, panama hats, and the trolley! What’s your favorite movie that shows the olden days?