You are here: Home / Culture / Lisa’s Home Bijou: Just Around the Corner

IN THE 1930s, architects preferred the Art Deco style when they designed modern buildings. Unfortunately, the economics of the Depression meant that funds were less available for private buildings. In Just Around the Corner, Shirley Temple’s father is a visionary architect with big financial problems. 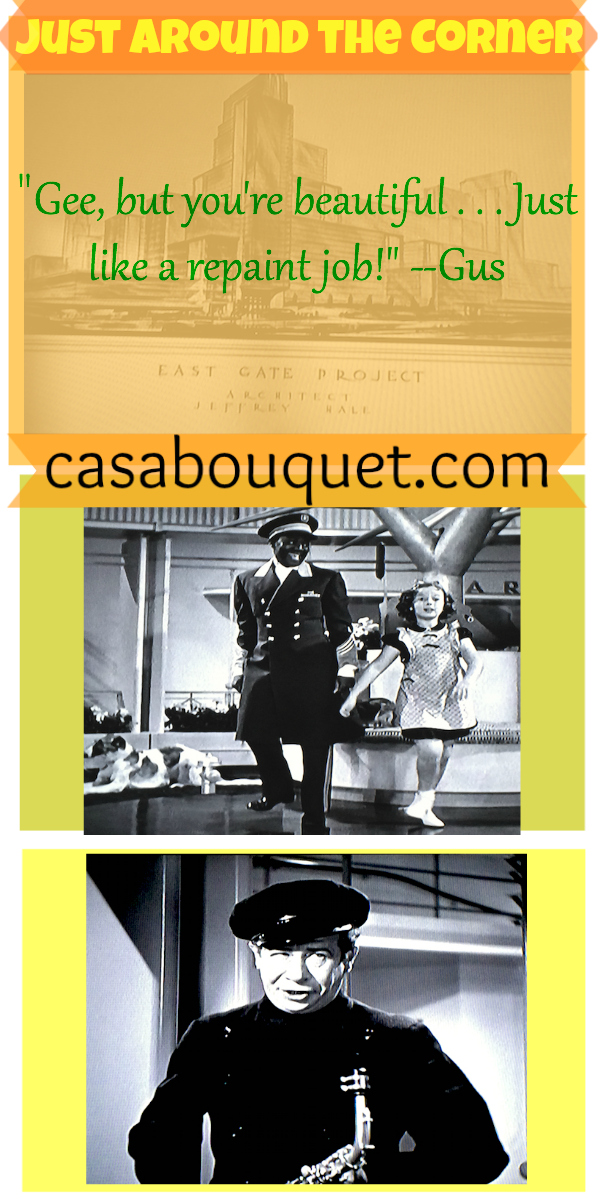 Movies of the 30s often tried to distract audiences from hard times by presenting glamorous settings. Most of the action in “Just Around the Corner” takes place in the luxury Art Deco apartment house, “The Riverview.” In addition to the great view from the building, we get to see Shirley Temple take on The Great Depression. 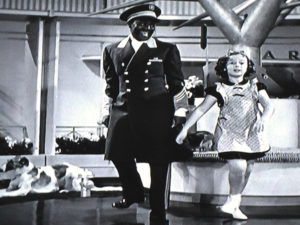 Penny Hale (Shirley Temple) is living a charmed life at Miss Vincent’s School for Girls when Just Around the Corner opens. Penny is suddenly telephoned at school and asked to return home. Home (up until now) had been the penthouse at “The Riverview,” a beautiful Art Deco apartment building in New York City. 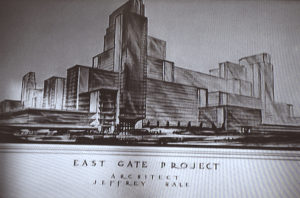 Penny discovers that the Depression has dramatically changed her privileged life. Her father, Jeff Hale (Charles Farrell) had been a wealthy architect. His dream was to create the East Gate Project, a major housing complex along the East River. The bank foreclosed on East Gate, and now Jeff works as the Riverview’s house electrician. He and Penny had to move from the penthouse to the super’s flat in the basement. 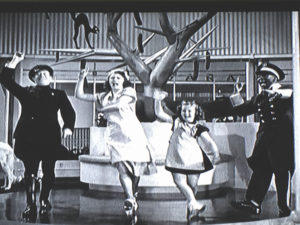 Perky Penny takes her family’s reversal of fortune in stride and helps with relations between the poor alley children she plays with and the rich kids from the Riverview. She figures out what is causing the Depression and sponsors benefits to help out Uncle Sam.

The cast makes this movie worth seeing. Lola, Jeff’s girlfriend, is played by Amanda Duff, while her uncle, Uncle Sam Henshaw is portrayed by Claude Gillingwater, Sr. Kitty, the maid and dog-sitter, is played by Joan Davis. Davis is best known for her early television star-turn in “I Married Joan” with Jim Backus. The chauffer, Gus, is Bert Lahr (without his Cowardly Lion makeup.) Broadway star Bill “Bojangles” Robinson plays The Corporal Jones, the building’s doorman. As always, it’s a treat to see Mr. Bojangles dance with Shirley. 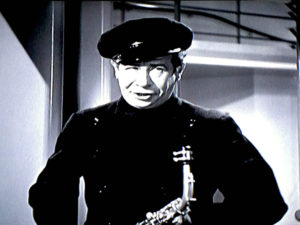 The musical numbers are peppy and fun. “This is a Happy Little Ditty” is sung while dog sitting, and Bert, Shirley, Bill, and Joan all take turns dancing along. “Brass Buttons and Epaulets” is a specialty number for Bill Robinson. Shirley and Bill bring the house down at the benefit with “I Love to Walk in the Rain,” a tap dance with a moving set and stage rain. 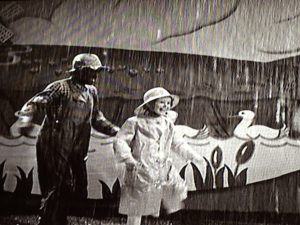 With Shirley Temple in charge, you can be sure that better times are Just Around the Corner.

I grew up watching Shirley Temple movies on TV and memorizing the “Shirley Temple’s Greatest Hits” LP. I treasure my Ideal Toy Shirley Temple doll in her “Rebecca of Sunnybrook Farm” outfit. In college, my friend AM and I cooked up one of the most famous sorority skits to “Be Optimistic.” I named one of my daughters for one of Shirley’s characters. I will be happy to get into an argument with you defending my contention that the play “Annie” was based almost song-for-song on “Little Miss Broadway.” What can I say? I will always honor the memory of Shirley Temple and I hope you will share her movies with your family.

Related links for Just Around the Corner