It Came From Outer Space (1953) is a classic sci-fi film based on a Ray Bradbury story. It is important to the genre because the outer space aliens that crash on Earth have no interest in invading or harming humans.

John Putnam is an amateur astronomer who makes a living writing about astronomy in Sand Rock, Arizona.

“You know I think it must be my money that impresses you. –What money? –Well I got a check today. –Johnny! You sold another article!” –Johnny and Ellen 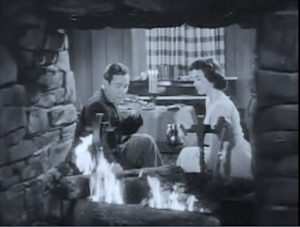 Johnny and Ellen discuss whether they should get married. Just as Johnny is going in for a big kiss, the two get interrupted by a huge fireball loudly speeding across the sky. It crashes by the Old Excelsior Mine. 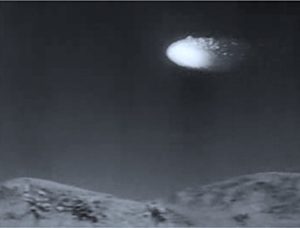 An alien slowly emerges from his ship, accompanied by spooky Theremin outer space music. It leaves a sparkly slug-like trail as it explores the desert.

Johnny gets his crop duster friend to fly him and Ellen to the crash site to inspect the crater. Everyone thinks it’s a meteor. Johnny finds the ship, but the alien closes the door when he approaches. A landslide buries the ship, leaving Johnny as the only witness.

Pete and Ellen ask Johnny not to tell anyone he thinks there is a ship as the sheriff and others drive up to the crash site. Johnny tells the sheriff and the newspaper editor and everyone thinks he’s crazy.

“What’s the amateur astronomer’s point of view? –There’s some kind of a ship down there. –A ship? –Don’t ask me what kind because I don’t know. –Oh you mean from one of those stars you write about? Or the kind that Pete here operates? –I tell you the evidence is buried right down there. This may the biggest thing that ever happened. If you’re smart you’ll get this whole area sealed off until we know what we’re up against.” –Johnny, newspaper editor, and sheriff 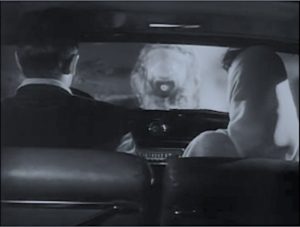 Johnny and Ellen run into their telephone linemen friends, Frank and George, on their way into town (there is a lot of driving around on the highway through the desert in this movie and you are never sure why!) They say they haven’t seen anything unusual, but Frank says he hears strange noises over the wires. 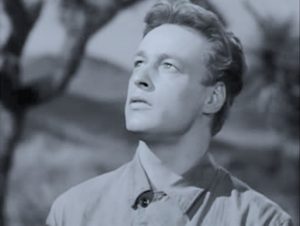 As Frank and George head down the highway they seem to run over the alien. They get out of their truck and get surrounded by slug-type goo.

Johnny has a notion that something is wrong and goes to look for Frank and George. He and Ellen find the empty truck and a glittering slime trail. They find George in the desert speaking and acting very strangely. (George may be familiar to you as the Professor from Gilligan’s Island.)

“Don’t be afraid. It is within our power to transform ourselves to look like you. Or anyone. For a time it will be necessary. We cannot, we would not, take your souls or minds or bodies. Don’t be afraid. Your friend is all right.” –alien

Johnny and Ellen bring Matt the sheriff out to where they saw George. All they find is a dead animal and the sheriff’s disdain. Back in town, George and Frank are walking down the street and completely ignore Johnny. Once Johnny chases them down, they tell him to back off, they need time (the aliens are very mysterious when they speak.)

Miners out in the desert encounter aliens. They know that the back of their mine is right up against the landing site of the “meteor.” They don’t last long with the aliens.

Sheriff Matt sends for Johnny. Frank’s wife is freaked out over his behavior. George’s fancy girlfriend is there too, and both men have said they are going somewhere over night. The alien Frank and George are driving around in the telephone truck and someone has broken into the hardware store. 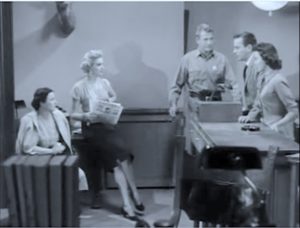 Sheriff Matt gets a call saying Professor Allen has disappeared from the crater. Ellen is out driving around and Frank stops her and gets in the car. He wants to be taken to the mine. When she says no, she gets slimed.

Johnny gets a phone call about Ellen and he and Matt drive out into desert. Ellen is standing on the rocks in a lovely cocktail gown waiting to lead Johnny to the mine entrance. (When people get “taken”, the aliens are not killing them, they are just taking their shape so they can work on their space ship. It means that they go around stealing clothes from people’s houses all through the movie! And they don’t have good fashion sense!) 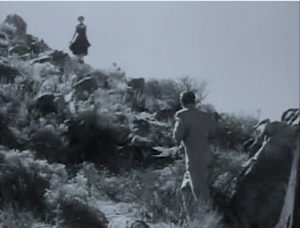 “We have souls and minds and we are good. –Then why are you hiding? –We are not yet ready to meet in friendship. –Why not? –Because you would be horrified at the sight of us. Had you fallen on our world, it might have been different. We understand more.” –aliens and Johnny

Johnny insists on the alien showing itself so he can protect them. He is horrified. He fights with Matt about whether to rescue Ellen or not. When Matt drops him at home, the aliens have been there and taken his clothes. Johnny and Matt fight because Matt can’t stand waiting as the aliens have asked. 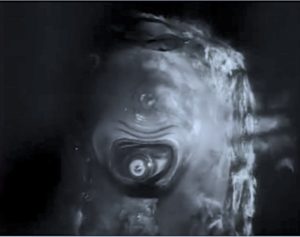 Matt rounds up a posse and hands out rifles. They make a barricade in the road to shoot Frank. 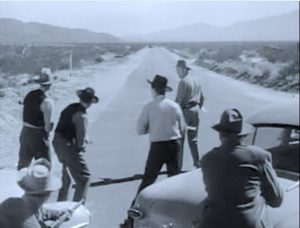 Johnny goes to the mine. Alien Ellen tries to kill him. Johnny is trying to warn the aliens to go ahead and leave, but they think he is leading Matt and the posse to them. Johnny convinces them to let go the townspeople they are “using” to try to stop the posse. This gives the aliens enough time to escape in their ship.

It Came From Outer Space has a great eerie soundtrack, a pretty ugly alien, and an interesting story. Our romantic couple, Richard Carlson and Barbara Rush, are easy on the eyes. This is an important film to include in a science fiction viewing party.

Resource links for It Came From Outer Space