Honolulu (1939) brings together a talented cast for an amusing look at the life of Hollywood public relations and the rarified atmosphere of the Hawaiian plantation class. In the 1930s, and even decades before, the territory of Hawaii, Honolulu, and Waikiki Beach held a tremendous allure for mainland Americans looking for a glamorous vacation. A traveler could get to the land of pineapple plantations by cruise ship or via PanAm Clipper. Join Eleanor Powell and Gracie Allen for a Hawaiian romp where the ukeleles and the drums never stop.

Love and romance result despite mistaken identities typical of so many vintage screwball comedies. The story begins at a gala Hollywood premiere for Brooks Mason’s latest film. Brooks (Robert Young) is so popular that he can’t go out into public without fans tearing his clothes apart (and sometimes his body too.) Brooks doesn’t attend this latest public event but a man who closely resembles him gets mobbed by the crowd.

“It’s getting so I can’t take a step without my public loving me. And tearing me apart.” –Brooks

The hospital delivers the Brooks lookalike, George Smith (also played by Robert Young), to Brooks’ apartment. Washington (Eddie ‘Rochester’ Anderson), Brooks’ valet, cares for the double’s injuries. Washington gets very upset when he realizes both George and Brooks are in the apartment and that he can’t tell them apart. 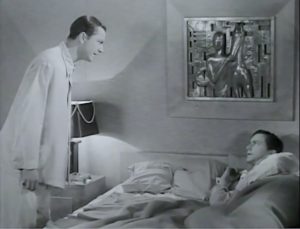 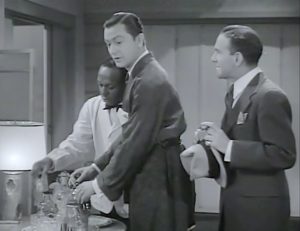 Brooks’ agent, Joe Duffy (George Burns), has just snagged Brooks a six-week vacation from the studio with strings attached — he has to make a few publicity stops. Brooks realizes that George could save him from this terrible fate by going to New York in his place. Even better, Brooks can take George’s place at his pineapple plantation home in Hawaii!

“What’s it like in Hawaii? –Oh there’s nothing much to do there. Just peace and quiet. –Peace and quiet!” –Brooks and George

Why would George agree to such a deal? George left a fiancé back home in Hawaii. Cecilia Grayson (Rita Johnson) thinks that George is dull and unsophisticated. Brooks convinces George that he can polish up his act by spending some time in New York City.

“You know if they gonna keep tearing your clothes like this you’ll have to take plenty suits with you. 6 weeks in New York. There must be 7 or 8 days in a week. Multiply them together. Six weeks, umm. Let’s make it 8 days in the week just to be on the safe side. Six times 8, 8 times 6. Seems to me I ought to know how much that is. Let’s call it 30. Yep, you need 30 suits. I knew I’d get it if I got my my revision separated from my abstractions.” –Washington 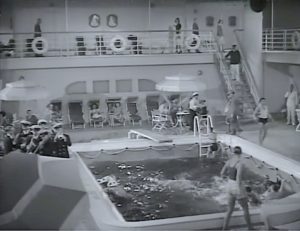 Joyfully, Brooks boards a cruise ship bound for Honolulu. (The ship would probably have been the Matson Line ship SS Lurline.) He enjoys reading newspaper accounts of “Brooks Mason” being mobbed by fans in Newark. Also on board are two entertainers bound for a gig at the hotel in Honolulu. (The hotel is probably the Moana, home of Hawaii Calls radio show, or Royal Hawaiian, owned by the Matson Line.) Millie de Grasse (Gracie Allen) plays the ukulele and sings. She thinks Brooks Mason is a living doll and her romantic ideal. 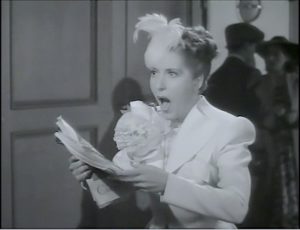 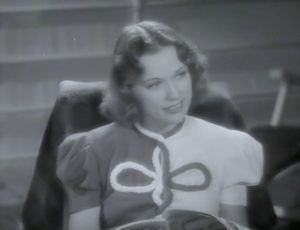 “Oh I suppose that’s peanuts to you. My dream man! I’m gonna meet him in person! And I warn you, if he makes one false move I’m his!” –Millie

Dorothy March (Eleanor Powell) is a fantastic tap dancer with a very down-to-earth personality. When Millie discovers Brooks on board she is thrilled. The object of Millie’s affections introduces himself as George Smith. Millie could care less about any George Smith. Brooks/George finds Dorothy very attractive and romance gets off the ground in the moonlight on deck. Dorothy pumps him for details about Hawaii, but he can only recite her quotes from the travel posters. 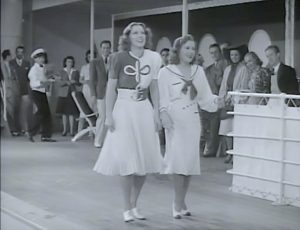 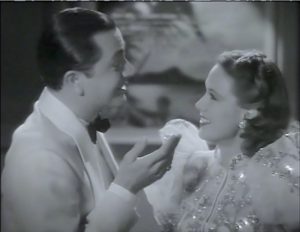 The next evening is the shipboard costume ball. All the passengers dress as movie stars and mistaken identities abound with multiple Marx Brothers in the crowd. Dorothy does an act in tribute to Bojangles (Bill Robinson) that showcases her fabulous dancing. 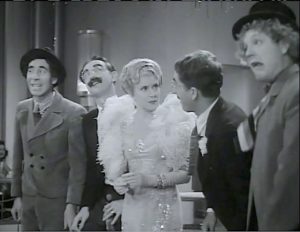 Once in Hawaii, Brooks takes up residence in George’s house, with Wong, the faithful servant, to take care of him. Cecelia really likes the new, improved “George.” But Brooks finds that living someone else’s life is not so easy to do. He goes to a party at Cecilia’s home and manages to seriously offend her father. He can’t keep his dates with Dorothy because of his obligations to Cecelia. And, worst of all, he gets arrested for stealing $50,000 from Cecilia’s father in an investment misunderstanding. 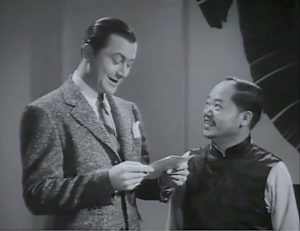 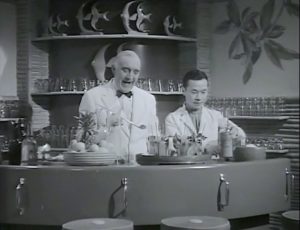 Meanwhile, the real George is spending all his time in the hospital after repeatedly getting mobbed by the fans in New York.

“You’re gonna marry this Grayson girl just ’cause she has a big plantation with lovely pineapples!” –Millie 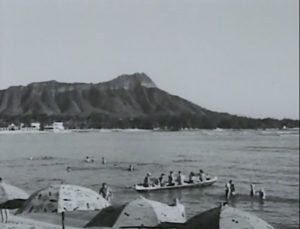 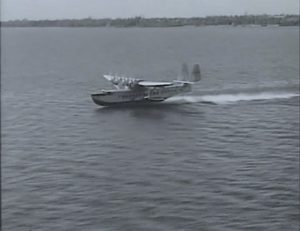 The musical accompaniment for all these hijinks is a real treat. Harry Warren and Gus Kahn contribute “Honolulu” and “The Leader Doesn’t Like Music” to the film. Gracie Allen sings and plays the ukelele with great charm. The King’s Men sing harmony. Andy Iona’s Islanders provide true Hawaiian music with their “Hawaiian Medley,” backing up Kealoha Holt’s hula and Eleanor Powell’s big production number at the hotel in Honolulu. (The show from the hotel is being broadcast on the radio – in real life Hawaii Calls was broadcast to the mainland from the Moana Hotel on Waikiki.) 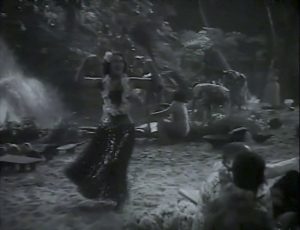 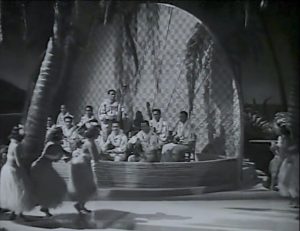 Her chorus line is dressed in grass skirts with flower hairpieces, while Eleanor’s skirt is lamé with silk tassels. The group performs a quick dance full of clapping, then a hula. Eleanor caps it off with her invention of a tap-hula. Men in pareus accompany her by playing pahu drums and pu’ili bamboo sticks. Hawaiian songs include Aloha ‘Oe, E Lili’u E, and Hola E Pae. 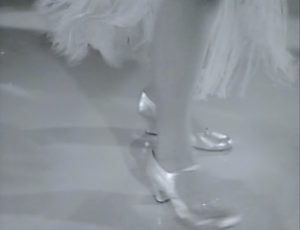 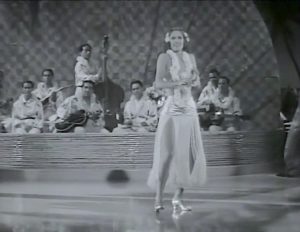 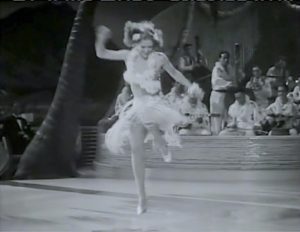 Take a refreshing break in Honolulu to enjoy music, suspense, and comedy with island flair.

Like many other movies of this era, this movie can be difficult to watch. I want to highlight the Hollywood fascination with romantic tropical locales, but I can’t even write about some of the movies I watched, they are so insensitive.

Famous Hawaiians like musician Andy Iona and hula dancer Kealoha Holt are relegated to the most minor of roles. Hawaiian music is included on the soundtrack along with pop songs written for the movie. The Hawaiian songs are listed as “Hawaiian Medley,” rather than by their names.

Eleanor Powell was an amazing dancer and I love watching her. But one performance is a tribute to Bill Robinson and she does it in blackface. Her hula performance has some resemblance to true cultural hula, but the tap section is just her fun invention. So I won’t say they should remake this movie, but I do wish there were more movies with Hawaiian stories starring Hawaiians. Try The Haumana (2013) if you are interested in a Hawaiian hula story.

Previous Post: « Do you know your favorite wines? Time to find out!
Next Post: Golden Colorado – Rocky Mountains and Buffalo Bill »