Holiday in Mexico (1946) gives us insight into teenagers of the 1940s, the diplomatic corps, and into Mexico City’s nightlife. Christine Evans (Jane Powell) is a bobby-soxer, US Ambassador Jeffrey Evans (Walter Pidgeon) is a diplomat (and Christine’s father), and Xavier Cugat, playing himself, is our guide to the bright lights of the city.

The 1930s and ’40s created a wave of interest in our neighbors to the south. The Pan American Union was housed in one of the most gorgeous buildings in Washington, DC; the US had an important naval base at Guantanamo Bay in Cuba; and the Canal Zone was crucial for trade. The atmosphere was just right for Latin musicians to make an impact on our popular culture.

One of the most influential was Cuban bandleader Xavier Cugat. In Holiday in Mexico, he leads his band, he acts, and he carries his tiny pet chihuahua through an enjoyable musical postre (dessert). 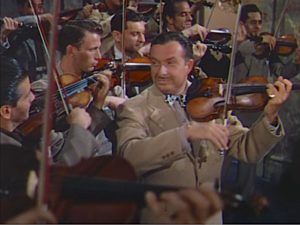 Christine is the only child of her widower father. She is adorable and is a talented soprano, but her life is not carefree. She has trouble balancing her normal teenager’s romantic life with her role as her dad’s social hostess. Stanley Owen (Roddy McDowell), the British ambassador’s son, would like to be Christine’s steady boo. Christine finally agrees once she realizes that Stanley can drive her around to do Embassy errands in his snazzy little green sports car. 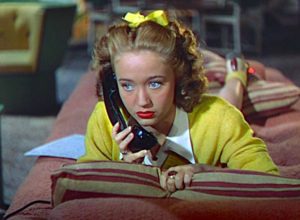 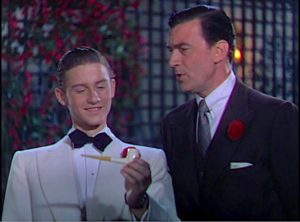 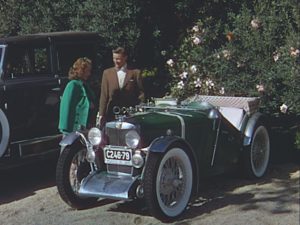 Christine wants to show her dad how grown-up she has become by managing a huge party at the US Embassy. Her first step is to visit the nightclub Casa Cugat to convince Xavier and his orchestra to play for the party. Xavier agrees, but warns her that she won’t be able to get his featured singer, the Hungarian soprano Toni Karpathy (Ilona Massey) because Miss Karpathy never sings at private parties. Christine takes the warning as a challenge and is very persistent with Miss Karpathy. Miss Karpathy finally agrees to sing at the party once she learns the identity of Christine’s father. 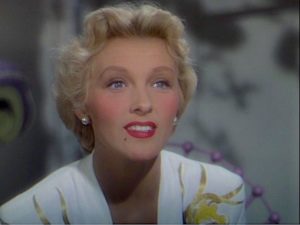 Christine’s next visit is to the home of José Iturbi, a concert pianist. His house is in chaos — a girls choir is rehearsing there, a St. Bernard is barking, his manager is confused, and his housekeeper is angry. In the confusion, Mr. Iturbi mistakes Christine for a soloist and she goes along with this ruse, singing an aria for an audition. Once she clears up the misunderstanding, he’s totally primed to accept her invitation to play a piece at the embassy party. By this time, Stanley thinks that Christine walks on the moon. Her father is completely impressed, especially when he finds out that Toni Karpathy is in town. 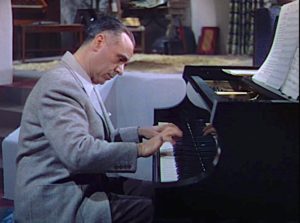 “Chris, I imagine you’ll be an ambassador yourself one day or maybe even President. Think of it, you’d be the first woman President! –Yes, yes. –Wouldn’t that be wonderful, Christine?” –Stanley and Christine

The Ambassador goes to Casa Cugat that evening. The joint is jumping — it’s the most popular club in Mexico City. The Cugat Orchestra is on stage with Xavier leading “Yo Te Amo Mucho” with his chihuahua tucked into his elbow (and his breast pocket!). The Ambassador makes his way backstage for a joyful reunion with Toni. They were young lovers years before when he was posted in Hungary. They reminisce about the old days, giving Toni a chance to show off her lovely voice. 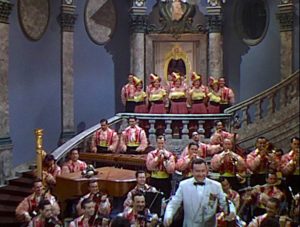 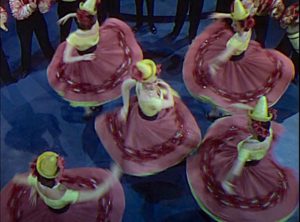 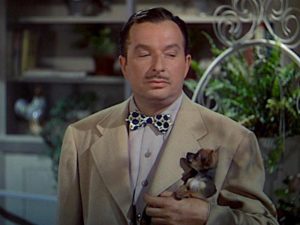 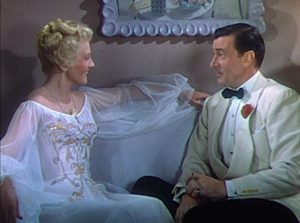 “Don’t you see, darling, you have your own place in my heart, a place no one else can fill. I think you know that, don’t you? –Yes. But I’m not leaving ’cause of her, honestly I’m not. Well, I have to get away for awhile, that’s all. –Because you think you’ve outgrown things around here, huh? –Yes. …–I’ll tell you why you’re running away, because you’re embarrassed. …Remember this, darling, everyone, everyone, makes a fool of himself at one time or another, many times.” –Jeffrey and Christine

There are lots more musical numbers, more misunderstandings and mishaps, and lots more romance before this confection ends. At one point Christine thinks that José Iturbi is her true love and it takes seeing his grandchildren to snap her out of it. Jeffrey finds trouble when the teenaged French ambassador’s daughter thinks she is betrothed to him. 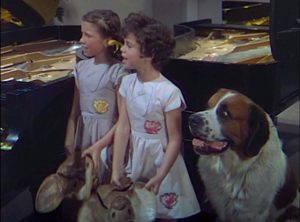 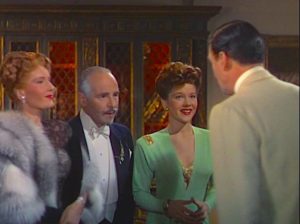 Holiday in Mexico is a fun excursion to a post-war world south-of-the-border. We recommend the trip.

Resource Links for Holiday in Mexico