One of America’s most-beloved Christmas songs is White Christmas. Written by Irving Berlin during World War II, it served as a reminder of home and hearth for many GIs. Bing Crosby introduces the song in the musical, Holiday Inn (1942), a film that is about a lot more than just Christmas.

Holiday Inn is a song and dance filled visit through a year’s worth of holidays. Bing Crosby and Fred Astaire are our expert tour guides, singing and dancing their respective ways into the hearts of Marjorie Reynolds and Virginia Dale.

Singer Jim Hardy (Bing Crosby) and dancer Ted Hanover (Fred Astaire) are partners in a successful New York nightclub act with Lila Dixon (Virginia Dale.) These two guys always fall in love with the same girl, and as the movie opens, they are both vying for Lila. Jim is never assertive enough with the girls due to his pitiful financial situation. 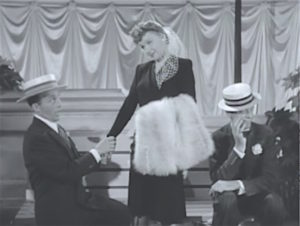 Jim tires of the New York scene and of losing girls to Ted. He buys a farm in Connecticut and plans to live off the land. After a year of trying to make it as a farmer, he ends up in a sanitarium for a rest cure. 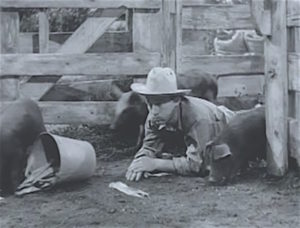 “Open holidays only? Say how many of those are there? –There’s about 15. That gives me 350 days a year to kick around in!” –Jim and Ted

In the sanitarium, Jim has his great idea: he gets back into show business by opening his farm as an inn. The inn will be open to city folks just 15 nights each year, on major holidays. He christens his farm “Holiday Inn.” 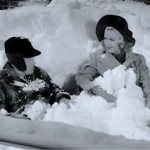 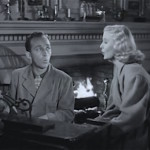 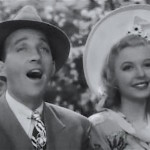 “Well, I wasn’t watching very closely. She was a medium built sort of a girl with a medium face. She had a nice evening gown on with a belt in the back. She was built just like a girl friend of mine, a girl you don’t know. Her name was Consuelo Schlepkiss, she used to play pinball machine a lot down at the corner drugstore. I remember one time she was high man three weeks in a row.” –Jim

Jim begins producing shows at the inn. He hires Linda Mason (Marjorie Reynolds) to sing and dance, while Bob Crosby’s orchestra plays onstage. This leads to a fabulous series of production numbers, all penned by Irving Berlin:

“I don’t know, it sounds like something you dream about at night and it would be wonderful. Then you’d wake up in the morning and realize it couldn’t work. –Oh it’ll work if I can sell the idea to some performers. They seem to think that profit sharing means taking bows on an empty stomach. —So that’s why you’re not open tonight. —Well, I’m also sort of particular about the kind of talent I’m gonna use. —Fifteen holidays a year! You’re a lazy fellow!”—Jim and Linda

There are many noteworthy scenes in this holiday tour with Bing and Fred. Louise Beavers turns in one of her usual outstanding supporting performances as the inn’s cook and Bing’s love advisor. In the Independence Day scene we get to see a short patriotic film showing military factory workers and President Roosevelt himself. 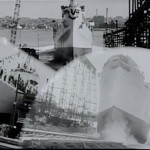 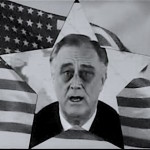 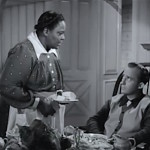 “Well why you close the inn and sit around like a jellyfish with the misery? ‘Cuz a slicker stole your gal and you ain’t got fight enough to get her back!”–Mamie

Fred and Marjorie go off to Hollywood, and we’re treated to a behind-the-scenes look at a soundstage and the movie-making process. For the Fourth of July, Fred does a tap dance using firecrackers to punctuate his choreography. This is one of Astaire’s most famous dance sequences ever; once you see it, you’ll never forget it. And Bing sings White Christmas and Easter Parade– twice! 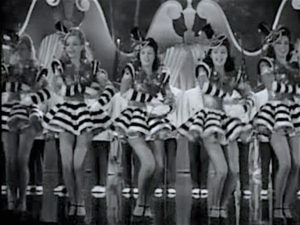 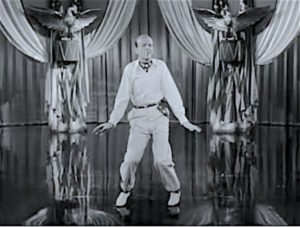 Get yourself in a holiday mood, anytime of the year, with Holiday Inn.