Americans had a lot to get used to in the years immediately following World War II. The war signaled the end of the Great Depression, but the boys who made it back needed jobs, and war widows needed to support their families. Holiday Affair (1949) gives a glimpse of life in the post-war years and a merry holiday romance featuring Janet Leigh and Robert Mitchum. 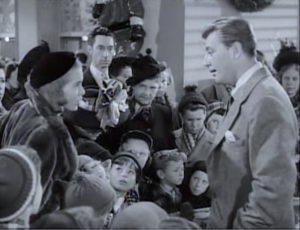 Connie works as a comparison shopper, and she has bought the toy train for her employer: she can’t afford such things for her son, Timmy (Gordon Gebert.)

“—There. You know you’re getting to look more like your daddy every day. –Mom, does it hurt much to die? –No, I don’t think so darling.”—Connie and Timmy

When she returns the train to Crowley’s, Steve loses his job. He had figured out that Connie was a comparison shopper, but he didn’t report her to the management. Steve needs the job, but his real goal is to move to Balboa, California (in Newport Harbor) and build sailboats.

“—What do you want to be? –…I want to build boats… –I don’t think it sounds odd at all. …But why aren’t you doing it? —Well, for one thing, the war nipped about 5 years out of my life. And then when I got out I made the mistake of listening to people. Do something sensible they said. Sell real estate or washing machines or mousetraps, but cut a few throats and wind up vice president. So I got me a nice cozy job at the finance company, wore young executive suits, lived in one room and cooked on a two burner.” 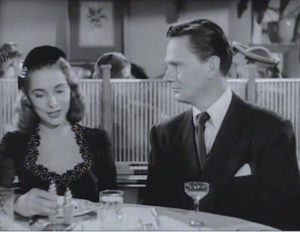 Connie has a matrimonial-minded boyfriend, Carl Davis (Wendell Corey), but Connie just can’t seem to get past the memory of her late husband. Timmy isn’t very fond of the idea of Connie marrying Carl, either. Something special clicks between Connie and Steve, the toy salesman, and she just can’t seem to acknowledge what it is. They keep saying goodbye, but she keeps coming up with reasons to find him again. Timmy takes an immediate shine to Steve, adding to Connie’s confusion. Steve’s just an awfully charming fellow: besides his sailboat dream, he has a habit of going to Central Park in any weather to eat hot dogs and visit the sea lions. 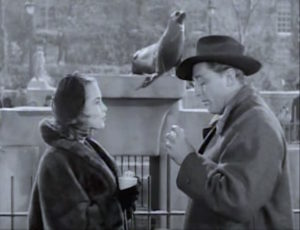 Though Connie is a war widow of modest means, she is always very cute (as Janet Leigh typically is) in her fur coat and fetching hats. She manages to have an outfit to suit every occasion.

With a different script and director, this story might have been presented as a screwball comedy, but there’s a psychological tone to the film: everyone is worried that Connie hasn’t confronted her husband’s death, that she idolized him, that she has forced Timmy to be like him, that she has made Timmy the man of the house though he is a little boy. Her friends are concerned that she isn’t moving ahead with her life. Steve is just the man to turn all this around.

“I’m going to make a speech. Mother, I’ve been married to you for thirty-five years. You boss me, you heckle me, you hide my things and pretend I’ve lost them, just so I have to depend on you. You’ve spent thirty-five years trying to make me admit that I couldn’t possibly get along without you. And you’re right, I couldn’t. What’s more, I wouldn’t want to. Every one of those years was good, even the bad ones, because you were with me.” –Mr. Ennis

Those most familiar with Janet Leigh’s work in Psycho may be surprised to see her playing such a light-hearted romantic role. Janet’s career has included a wide variety of roles, such as in Bye Bye Birdie, My Sister Eileen, and Living It Up as well as the aforementioned Psycho. Robert Mitchum is also not particularly known for romantic comedies. His work in Cape Fear, Heaven Knows, Mr. Allison, and What a Way to Go! demonstrates his range.

Holiday Affair lets you enjoy Christmas in New York from the comfort of home and allows you to vicariously experience some satisfying romance in the process.