You are here: Home / Culture / In the Good Old Summertime: Lisa’s Home Bijou

In the Good Old Summertime is named for the old song from 1902. It’s actually a Christmas story, with Judy Garland and Van Johnson competing at the music store where they work, while they are getting to know each other as pen pals.

The story begins in Chicago in the early 1900s, before people had cars. Andy Larkin (Van Johnson) spends Sundays in the park with Mr. Oberkuchen (S.Z. Sakall), Nellie (Spring Byington) and Hickey (Buster Keaton). They picnic with an oompah band in bandstand and everyone singing along. 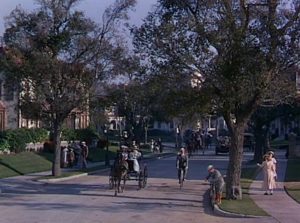 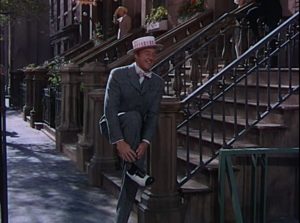 On Monday morning Andy is excited to go to Post Office to pick up one of his special letters. They are anonymous and left in a PO Box. He bumps into a young lady and totally messes her up. 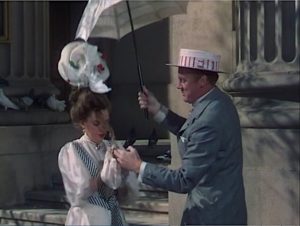 Andy is the head salesman at Oberkugen’s Music Store at $15 per week. In the locker room at the store he shares his special letter with his friend Rudy.

“There are so many wonderful things to write about in this world of ours. It would be wasting precious time if we told each other the sordid details of our daily lives, so don’t let’s do it.” – Veronica

A Stradivarius and 100 harps

Mr. Oberkuchen has a Stradivarius violin, which he does not play well. His nephew Hickey works in the store and gets in trouble for touching the violin. 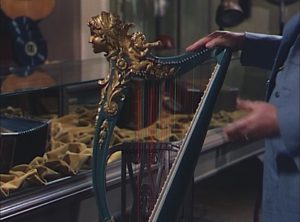 Veronica Fisher (Judy Garland) comes into the shop and asks Andy for a job. She is the young lady that Andy bumped into with his bike. Veronica tackles selling a harp to a customer to show Mr. Oberkuchen what she can do. 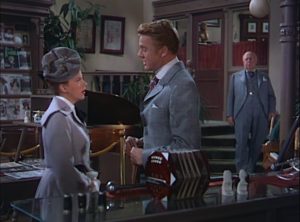 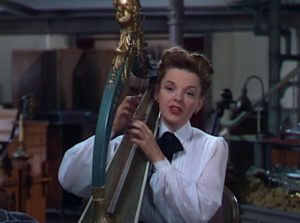 Veronica lives with her aunt Addie, a dressmaker. She is receiving letters from a mysterious pen pal, too.

Andy dines in a very nice restaurant where a group of young women play classical music on stringed instruments. They are lovely in their blue organza dresses with lace and puffed sleeves. The young violinist, Louise, has a crush on Andy. They both live in the same boarding house. He’s very supportive of her career and wants her to win a scholarship to study in Leipzig.

As the months go by, the harps still are not selling. Veronica and Andy are in competition for sales. Andy continues to write beautiful letters to his lady friend, copying poems and romantic passages from literature.

Christmas In the Good Old Summertime

Christmastime arrives and the shop is decorated with ribbon garlands and a Christmas tree. Andy is excited because he is going to meet his pen pal at last at dinner at Heinkel’s. Mr. Oberkuchen announces a surprise evening inventory, trying to keep Nellie from going out with another man. Veronica and Andy are crushed to be missing their dates.

“When I came here I was a very enthusiastic girl, and now look at me! Well let me tell you one of these days I might find out that I don’t have to work at all and then I’ll really tell you what I think of you!” –Veronica

Much later, Rudy and Andy peek in the windows of the restaurant and Rudy sees Veronica waiting at a table. He figures out that Veronica is Andy’s pen pal. Andy hates the idea and walks away. Veronica waits a very long time and is the subject of interest – a woman alone in a restaurant. 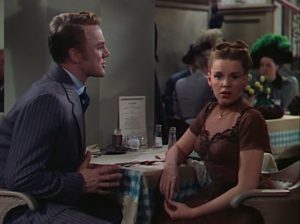 On reflection, Andy returns to the restaurant and sees her still waiting. Veronica won’t let Andy sit with her. He sits at a table near her to keep talking to her.

“You may have beautiful thoughts, Miss Fisher, but you certainly hide them. You’re cold and snippy like an old maid and if you don’t watch out that’s what you’re gonna be.” –Andy

Aunt Addie stays up to hear about the date, and Veronica is so sad. She feels ill and stays home from work.

Andy drops by her house during his lunch hour to see how she is. He tells her about Mr. Oberkuchen’s party at the Vienna Gardens. A neighbor girl drops off her baby brother to be watched. Andy shows his knowledge of baby care. Aunt Addie shows up with a pen pal letter that Veronica can’t wait to read. She immediately feels better and tells Andy she will attend the party for Mr. Oberkuchen and Nellie. Hickey asks to escort Veronica to the party.

“You know if you’re really in love with a girl, you don’t take her to a big party. You take her somewhere where there’s music. You get a little table, just the two of you.” –Andy

Mr. Oberkuchen gives Andy his Stradivarius to carry to the party. No one likes to hear Mr. Oberkuchen play and Andy tries to change his mind.

Louise invites Andy to her audition for the scholarship. She sees the Stradivarius and thinks Andy has borrowed it for her. Andy borrows Louise’s violin to bring to Mr. Oberkuchen’s party. 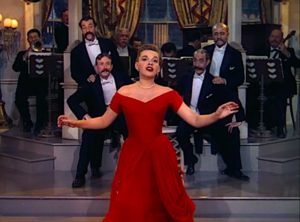 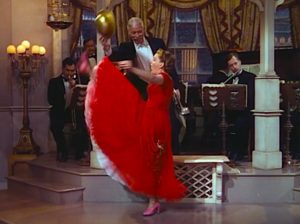 Veronica entertains the party guests singing and dancing with a barbershop quartet. Hickey is forced to invite Mr. Oberkuchen to play his violin for the guests. Hickey’s spectacular fall with the violin is one of the highlights of the movie. 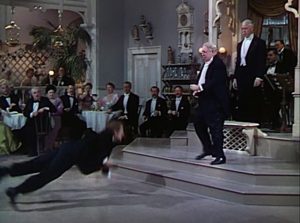 Andy rushes to Louise’s audition to retrieve the Stradivarius with Mr. Oberkuchen right behind him. He is overwhelmed by how beautiful it sounds in Louise’s hands, but he fires Andy.

Much of nostalgic mood comes from the old Tin Pan Alley songs: In the Good Old Summertime, Beautiful Dreamer, Meet Me Tonight in Dreamland, Put Your Arms Around Me Hold Me Tight, Wait ‘Til the Sun Shines Nellie, Little Brown Jug, Mr. Jefferson Lord Play that Barbershop Chord, and I Don’t Care. Merry Christmas was written for the movie for a tender Judy Garland ballad. In the Good Old Summertime is a musical remake of The Shop Around the Corner (1940). This story was remade again in You’ve Got Mail (1998).

The movie has lots of early 1900s details:

Will Andy and Veronica get over their dislike of each other? Will Andy ever reveal to her that he is the pen pal she loves? In the Good Old Summertime will put you in a jolly mood in classic romcom style. 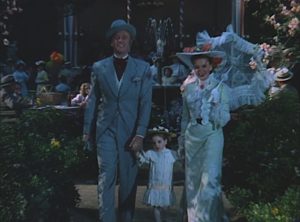