The 1943 film,Girl Crazy, is one of the best examples of the early 20th century “go West” philosophy. A curious trend in plotlines started in the movies and theater in the 1920s and 1930s. It goes as follows: a hero or heroine living in the east is headed for certain moral downfall if high living continues. An authority figure invariably recommends college (or a rest cure, or a ranch) in the West as a way to get off the road to perdition and back on the straight and narrow.

“There hasn’t been a woman out there since the Civil War!”

Girl Crazy was an important play in the history of Broadway Theater. It featured Ginger Rogers in her first starring role. In fact, she was discovered by Hollywood agents while starring in the play. Ethel Merman, the former stenographer with the amazing voice, had her first Broadway role in Girl Crazy, and brought the house down with the song, I’ve Got Rhythm. Wouldn’t it have been great if someone had filmed this original play in 1930?

The film version is no less delightful. It stars Judy Garland and Mickey Rooney and was made in 1943, the height of World War II, about ten years after the original Broadway show. Music for the play and the film was written by George and Ira Gershwin and many of the songs are considered classics. Most of the glorious songs from the play were used in the film: Treat Me Rough; I’m Bidin’ My Time; Could You Use Me?; Embraceable You; Fascinating Rhythm; But Not for Me; and the grand production number, I’ve Got Rhythm. 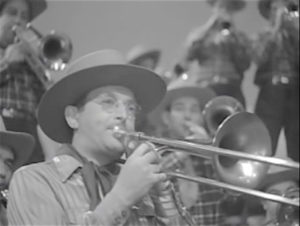 Tommy Dorsey and his orchestra are the house band in the film. They perform in a New York nightclub, at a college birthday party, at a pre-rodeo prom, and at the rodeo itself. Fascinating Rhythm is a showcase piece for them; a rich orchestral arrangement along the lines of Rhapsody in Blue. Adding to the spectacular production value of the film is the choreography of Busby Berkeley for the I’ve Got Rhythm production number. 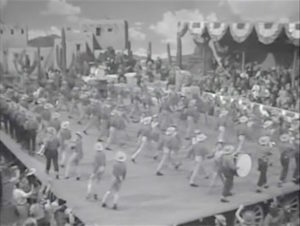 The story begins when Danny Churchill (Mickey Rooney,) the son of a wealthy publisher, visits a New York night club featuring 100 beautiful chorus girls. A young June Allyson gets on stage to do Treat Me Rough, a specialty number a la Betty Hutton. Danny ends up on stage with the showgirls, does an Parisian Apache dance, and his antics show up on the front pages the next morning. 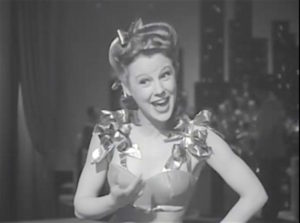 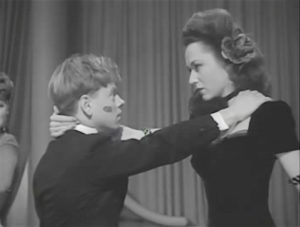 Danny’s father has had enough. He calls his son into his office to inform him of his destiny: the Churchill men have attended the Cody College of Mines and Agriculture for two generations and now Danny’s attendance there will make it three. Danny protests strongly about being sent out west.

“Son, you’re living in a world of weekend whimsy! … Any mention of Danny, Junior winning academic honors at Yale? No! Or even a spelling bee? Why the next thing you know, you’ll be sponsoring a beauty contest!” — Danny’s father

Danny arrives in Codyville, and walks eight miles through the desert to the college. Unlike New York, there are no taxis in Codyville. On the way, he meets a young woman repairing her mail vehicle. It’s Ginger Gray, postmistress and dean’s granddaughter, played by Judy Garland. Danny is smitten immediately. 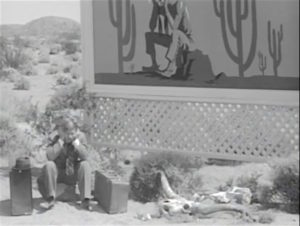 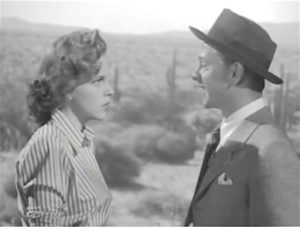 Being the debonnaire New York playboy, Danny is the worst tenderfoot anyone in Codyville has ever seen. His classmates initiate him to the western style, with much amusement. They dress him in goofy western clothes; they give him a 20-gallon hat and chaps decorated with long fur. 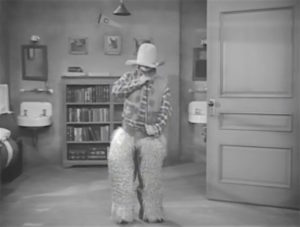 Danny is very unhappy at college and he quits several times. A telegram is phoned in to his father in which he calls his classmates “pretty snerfy.” A group of them overhear this conversation and take high umbrage. When the state decides to close the college for lack of applicants, Danny devises a strategy to save the school, which finally wins him the admiration of his snerfy classmates.

“–How do I look? –You look great, old man! –Yeah, well, if you bump into Buffalo Bill, tell him not to worry.” –Danny and Henry

He organizes a “Queen of the Rodeo” competition to stir up publicity. Ginger is the popular favorite of the college men for the honor, but Danny needs the Governor’s daughter to win for political reasons. This leads to dramatic tension between Ginger and Danny. 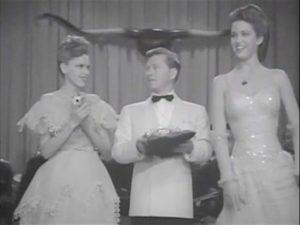 “–You are the most precocious, overconfident, spoiled young man I’ve ever had the misfortune to meet. –I think you’re cute too. –And as an added attraction, you’re a quitter! … –Now, wait a minute, now it’s my turn. Did anyone ever tell you that you’ve got a face like a two-week vacation, with pay? Did anyone ever tell you you’ve got a nose cute enough to write a song about?” — Ginger and Danny

The I’ve Got Rhythm production number at the end is not to be missed (9 minutes long!). Judy Garland belts the song out with real joy and she is adorable in her mid-calf boots and short, fringed skirt. There are dozens of backup singers, Tommy Dorsey’s huge orchestra, and at least 100 dancers, as well as Mickey and Judy. There’s tap and jitterbug dancing, whip cracking, guns shooting and finally a cannon is shot off. 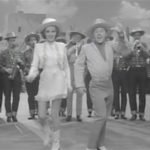 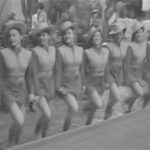 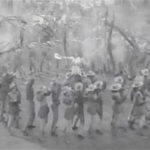 The experience of seeing all this will probably leave you speechless, but be sure to see it anyway. This is a great film, a feel-good musical made in the heyday of that genre. It probably went a long way to help Americans forget about the war which was raging outside, for a few hours.