Before we get started our latest Film Festival entrée, I have some news! Casa Bouquet is celebrating 6 months online! 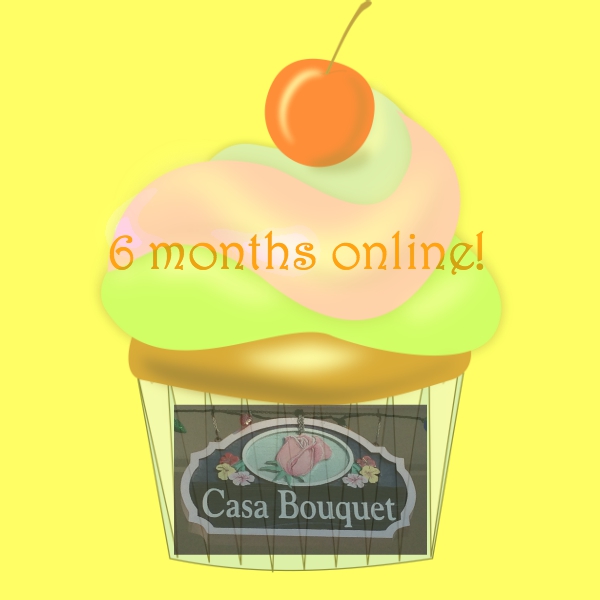 To celebrate, I am hosting a giveaway (sweepstakes)! Take a chance to win a $25 Amazon gift card! Just comment on any post in Casa Bouquet and you’ll be entered. Additional ways to enter: Enter your email in the Subscribe section on the right; OR go to Casa Bouquet Facebook page and Like the page; OR go to Casa Bouquet Pinterest and Follow. Enter up to 4 ways! The winner will be notified by email or private message. Entries limited to U.S. residents 18 years of age and older. Read the giveaway disclosure and policies here. Giveaway ends September 25, 2015 at 11:59 pm EDT. Thanks, dear readers, for helping me celebrate my blog!

SEARCHING FOR fine art can lead to travel in exotic and beautiful places, such as Hong Kong and the Middle East. In the 1966 film, “Gambit,” Michael Caine masterminds a caper to pursue such artistic riches, and ends up in these exotic locales. But his first problem is how to convince Shirley MacLaine to be his accomplice. 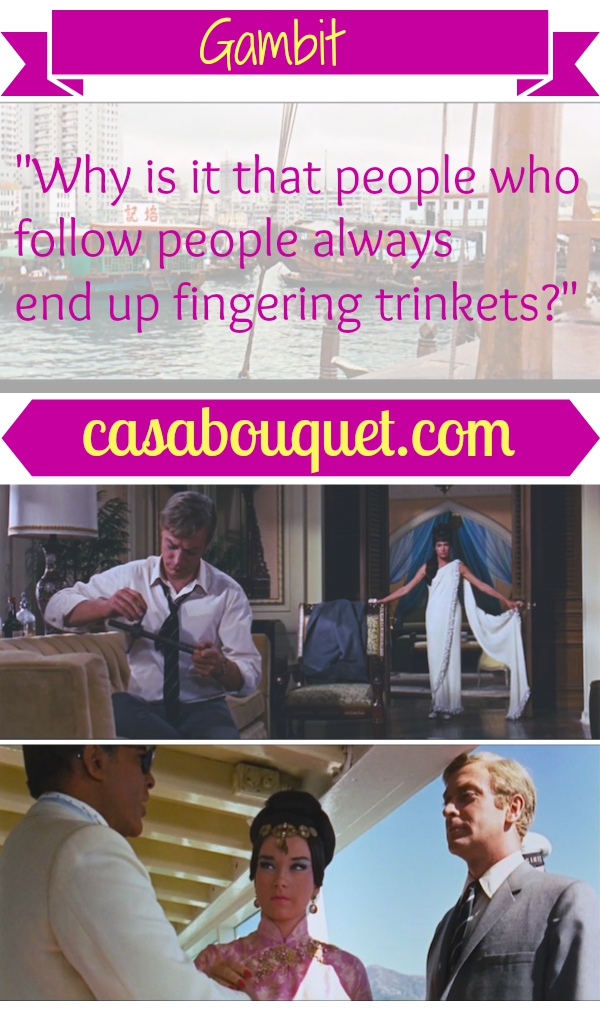 “Gambit” opens in Hong Kong, where we watch debonair Harry Dean (Michael Caine) follow a beautiful Eurasian girl down the street into the International Palace of Joy, a local nightclub. Harry and an art dealer friend visit the club and watch the floor show, a multi-national version of New York’s Kit Kat Club. It features the beauty they were following on the street, Nicole Chang (Shirley MacLaine), who works as a chorine in the floorshow.

Nicole is inscrutable. Even after Harry invites her to his table and buys her drinks, she refuses to smile or speak. Harry offers her $5000 to pull off a job with him, and she finally relents.

Harry and Nicole fly to Dahmuz, a very prosperous Middle Eastern country. Their destination is a visit with Ahmed Shahbandar (Herbert Lom) the richest man in the world. Shahbandar owns a rare Chinese bust, the Empress Li Su, which looks like Shahbandar’s late wife. The bust also looks remarkably like Nicole, who is dressed as a Chinese princess for the visit. Harry hopes that Nicole will catch Shahbandar’s eye and that will help clinch the deal for the rare bust.

Of course, the movie would be over in 15 minutes if everything went Harry’s way. Ahmed turns out to be much more intelligent, perceptive and analytical than Harry thought — probably greater than Harry himself. Nicole is not an obsequious china doll who follows Harry’s every bidding. She’s a feisty, intelligent young woman, who might be able to help Harry if he would allow himself to respect her. And Harry is not quite as suave as he thinks. He can’t quite pull off the educated Etonian facade, since the con man Cockney he really is keeps showing through.

Jean Louis created the exquisite costumes for the film. Shirley dresses in traditional cheongsams (very vintage vogue) for much of the film, and are they ever gorgeous. There’s a red and white one, a teal and gold one and a pink one with gold lace trim. Shirley also looks fabulous in a white, one-shoulder, roman-style gown with silver trim.

“Saleem and I have been friends for years. We have many interests in common. He also shares my enthusiasm for gadgets. In fact it was he who helped me to perfect all those little electronic devices to protect my paintings and sculpture. One of these days we hope to test them out!”—Shahbandar

Will Nicole earn the $5000 Harry promised her? Will she and Harry end up with each other? Can Harry figure a way around Ahmed’s elaborate photo-detector alarm system, his sliding bookcases, his rooms that change floors? The secret panels? Will Harry get the Li Su bust, or will he go bust? Tune into “Gambit” and find out.

I love a good caper film. There’s something about the impossible puzzle and the suspense that really appeals to me. “Gambit” has the added perks of Shirley MacLaine (one of my favorite dancers), young Sir Michael Caine, and humor with the tension.