Forbidden Planet (1956) was the first big budget sci-fi film. Rather than aliens invading the earth or monsters from nuclear testing, this film takes place completely on another planet, Altair IV. The score was composed electronically by a couple from Greenwich Village and makes for some very eery atmosphere. 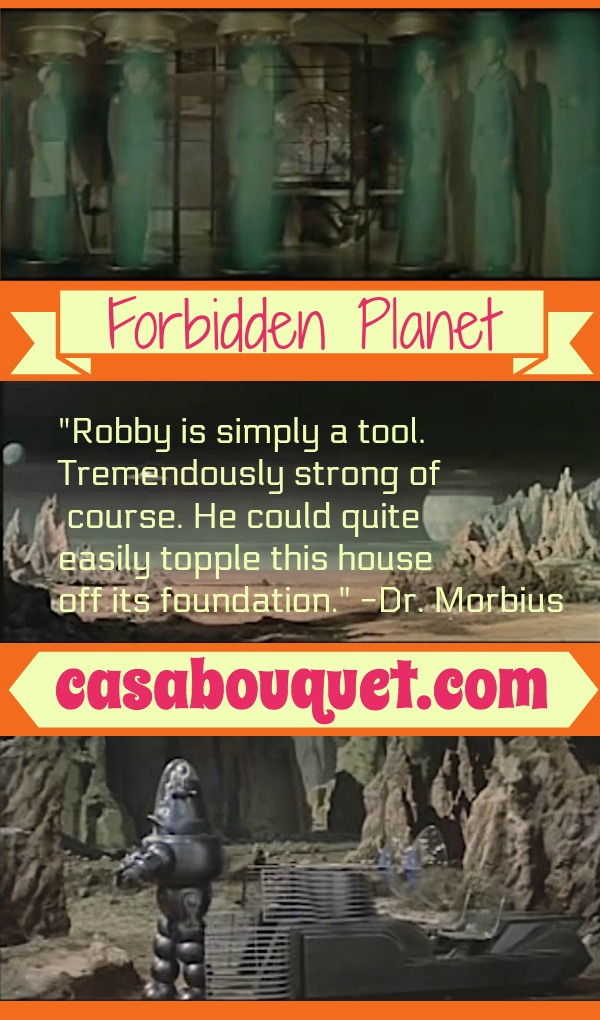 Forbidden Planet begins on a spaceship in the 2300s. It reminds you of Star Trek, until you remember this film was made well before Star Trek. The crew has been sent as a relief party for a ship that crashed on Altair IV many years before. 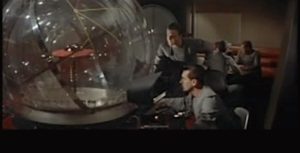 Within landing range of the planet, the crew makes contact with Dr. Morbius, one of the crew from the ship that crashed, the Bellerophon.

“Spaceship, identify yourself, you’re being tracked. –Cut me in. United Planets Cruiser C57D, JJ Adams commanding. Who are you? — Morbius of the Bellerophon. Edward Morbius.” –Cmdr. Adams and Dr. Morbius

The crew land, proceeding with their mission despite Dr. Morbius’ objections. The planet is desert-like with a green sky and two moons.

Robby the Robot picks the officers up in his special high-speed vehicle. Robby was designed by Dr. Morbius and he speaks many languages and can synthesize any substance. They arrive at Dr. Morbius’ beautiful modernist home. They share a delicious lunch synthesized by Robby.

“Robby is simply a tool. Tremendously strong of course. He could quite easily topple this house off its foundation. –Well, in the wrong hands, mightn’t such a tool become a deadly weapon? –No, doctor, not even though I were the mad scientist of the taped thrillers. Because you see there happens to be a built-in safety factor.” –Morbius and the doctor

Morbius explains that Robby has been programmed with inhibitions that would not allow him to harm rational beings. He would “blow a circuit” instead. The Commander wants to interview all the survivors of the Bellerophon. Morbius reveals that all the crew died except for Morbius and his wife.

“Dr. Morbius, just what were the symptoms of all those other deaths? The unnatural ones I mean. –The symptoms were striking, Commander. One by one, in spite of every safeguard my coworkers were torn literally limb from limb. –By what? –By some devilish thing that never once showed itself. –And the Bellerophon? –Vaporized as the three remaining survivors tried to take her off.” Commander Adams and Dr. Morbius

Dr. Morbius’ wife died, but his daughter appears and is introduced to the officers. She is wearing a very short dress and numerous jewels. (Anne Lloyd Francis’ outfits were so short, this film was banned in France at first!). Dr. Mobius has been reluctant to allow Alta to visit earth, but she’s an 18-year-old young lady. The crewmen are very interested in her!

Dr. Mobius wants the Cruiser gone and does whatever he can to help the crew make contact with Earth for new orders as soon as possible. The crew cannibalizes the ship and with the addition of special lead shielding produced by Robby, they create a communication device to check orders with Earth.

“It’s nothing really personal. It’s just a kiss. –Hmm. But why should people want to kiss each other? –Oh it’s an old custom. All the really high civilizations go in for it. –But it’s so silly! –But it’s good for you though. It stimulates the whole system. As a matter of fact you can’t be in tip-top health without it. –Really? I didn’t know that. –I’d be only too happy to show you.” –Lieutenant Farman and Alta

In the night, the ship is entered by an unseen assailant and an important piece of equipment, the Klystron monitor, is destroyed. The sentries and the sleeping crew don’t see anything.

The Commander is sure Dr. Morbius knows something about it. When he visits the home, Robby tells him that no one can disturb Morbius when he’s in his study. Meanwhile, Alta is swimming in the nude in the pool in her garden. The Commander kisses Alta and her feelings are awakened! She is like Eve after biting the apple!

Morbius tells the Commander and the doctor about an ancient race from the planet, the Krell. They were very advanced and had explored the planets. All trace of their civilization is gone from the surface of the planet, but much of their equipment and labs are still underground. Morbius takes them on a tour.

They ride a shuttle deep into the planet to see the nuclear power source and ventilation system of the Krell.

Back at the ship, the ship’s cook gets permission to leave the guarded perimeter to meet Robby and pick up 480 pints of bourbon. Meanwhile, an invisible force approaches the ship.

Will the sinister Dr. Morbius share his discoveries with United Planets? Does he control the monstrous invisible force? Will the crew make it off Altair IV? Will the Commander and Alta stay together? How many things can you find in this film that inspired future science fiction? Be sure to see Forbidden Planet!

I was a huge fan of Anne Lloyd Francis as a little girl. She is so cute in Forbidden Planet but she was also a big force on TV. Her smart, independent detective, Honey West, was an important role model many years ago.