You are here: Home / Culture / Lisa’s Home Bijou: Earth vs. the Flying Saucers

Earth vs. the Flying Saucers (1956) was the first movie that Ray Harryhausen used stop motion animation on flying saucers. Alien invasion films became a staple during the 1950s and this film is a classic!

“As a result, headquarters of the Hemispheric Defense Command in Colorado Springs issued an order. ‘All military installations are to fire on sight at any flying objects not identifiable.'” –narrator 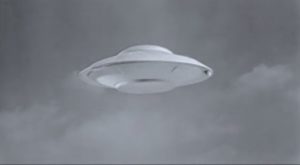 The film opens with a narrator explaining UFO sightings and military collection of data. Dr. Russell A. Marvin and his brand new wife are driving through the desert. Dr. Marvin is recording a report on a reel-to-reel tape recorder. 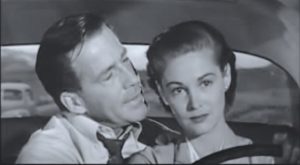 “Because of recent scientific advances it is now possible to realize an ancient dream, the exploration of outer space. To prepare for this great stride forward we are assembling data on conditions at atmospheric levels beyond those hitherto explored. To collect the necessary data unmanned automatic observation posts are being sent up in multiple stage rockets to a distance hundreds of miles above the earth’s surface.” –Dr. Marvin

Dr. Marvin is interrupted by a scary sound. (I saw this movie as a preschooler and that sound scared me for years!). A flying saucer is chasing their car! Carol Marvin just keeps driving – what a woman! When they stop the car, they have a smoke to calm down. 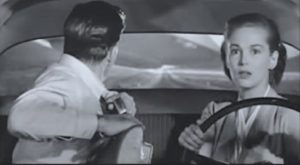 The Marvins finish making their way to the military installation to fire their 11th rocket (out of a planned 12). They are interrupted by the sudden appearance of Carol’s father, the General. He brings bad news from Panama.

The satellites have been falling from the sky. Apparently they are blowing up in outer space. During dinner the three see strange lights in the sky. 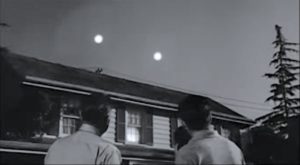 “Look! What are those lights? –They’re what the pilots call fool lights. –St. Elmo’s fire in ancient times. Superstitious regard them as omens of things to come. The best science has been able to make out of them is that they’re electric particles agitated by moving air. Same principle as the aurora borealis. –There’s so many of them around the project the last couple days, we all just take them for granted.” –Russell, Carol, and General Hanley

The next morning the team prepares the 12th rocket for take off. Russell plans to monitor its progress more fully with video and audio. Right before launch a UFO is sighted – a flying saucer! 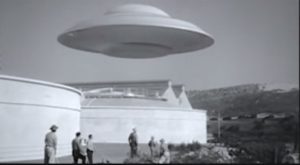 The saucer lands on base and the aliens emerge. The military fire and shoot one of the aliens. The aliens shoot back with a disintegration ray. 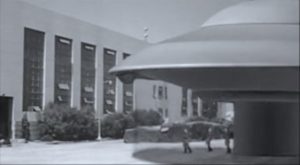 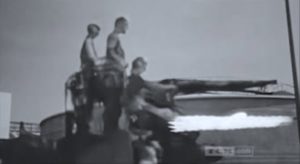 The aliens start destroying the whole base. Russell and Carol are safely in an underground bunker and miss all the destruction and the aliens taking Carol’s dad into the saucer.

“And I hope you can understand me. Whoever you are, whatever you are, you’ll regret what you did at the project. –Perhaps you can explain why, after contacting Dr. Marvin, we were met with violence. –You’ve contacted Dr. Marvin? –We spoke to him. — All he heard was meaningless sounds. The same kind of sounds I just heard. –We had hoped a sufficient adjustment for the time differential between us would have been made.” –General and aliens

Russell and Carol head to Washington and without permission, Russell contacts the aliens. They ask to meet with him at the edge of the Chesapeake Bay.

Russell gets a car and eludes Carol and the police to get to the rendezvous (looking an awful lot like the California coast, mountains and all.) The aliens invite Russell, Carol, and the pursuers into the ship.

The aliens want the earth to agree to submit. The aliens have a special machine where they can take all the knowledge from a human’s brain and add it to their database. They give Russell 56 days to convince everyone to yield to their demands.

Dr. Marvin gets permission from the military to build a weapon at Maryland’s Aberdeen Proving Ground he thinks might work on the flying saucers. He tries to convert electricity to high frequency sound. He and fellow scientists think that sound could break the aliens’ force. The new weapon works. A glowing flying ball of light comes into the lab. The major shoots it down.

The team drives away from the lab with the weapon while the saucer lands at the lab. The new weapon disrupts the flying saucer. An alien left behind disintegrates Dr. Marvin’s colleague, then the truck with the weapon. The major shoots the alien. They take the suit off the alien to see its humanoid form. 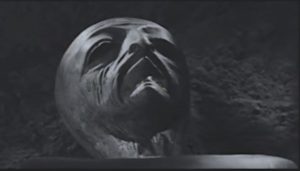 At this point, the film enters an action phase with bombers and fighter planes battling flying saucers in the air. The aliens mess with the sun and meteors to cause catastrophic storms. We get to see flying saucers flying over the Smithsonian, the National Gallery of Art, the Jefferson Memorial, the Washington Monument, the White House, and the Capitol. Dr. Marvin bravely leads his army colleagues around town while Carol clings to him. 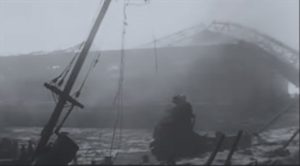 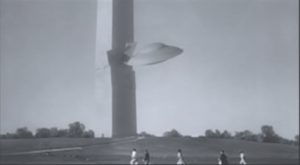 “The present danger is ended.” –Major

Hugh Marlowe is a very serious but cool and romantic rocket scientist. Joan Taylor is not a fainting flower, always willing to help her husband, cooking and driving the car! I think it is amazing to see Ray Harryhausen’s special effects, all done with stop-motion animation. Watch Earth vs. the Flying Saucers to see a well-written story and the roots of science fiction at the movies. 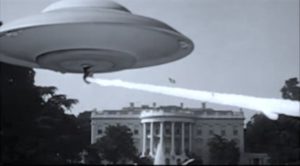 Resource links for Earth vs. the Flying Saucers