Cimarron was the first Western film to receive an Academy Award. It’s an epic saga depicting the changes in pioneer Oklahoma through the eyes of the Cravat family. The film is considered to be an accurate representation of the times, based on Edna Ferber‘s meticulous research. In Cimarron, Ferber helps us glimpse the lives of Oklahoma pioneers from 1889 through 1929.

Cimarron means “wild and unruly,” a true metaphor for the frontier times in Oklahoma around the turn of the 20th century. Edna Ferber, author of the novel, was a celebrated writer and member of the Algonquin Round Table. She wrote with grand sweep, elevating very American stories to the level of mythology. Her enduring legacies include Show Boat, Giant, and So Big!

It is noon on April 22, 1889. Two million acres of Oklahoma lands are opening up to settlers. Tension is mounting among the multitudes of people lined up at the Oklahoma border. Dixie Lee (Estelle Taylor) is there, a lone woman trying to make the land run, as is Yancey Cravat (Richard Dix.) 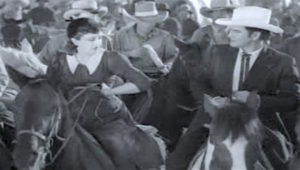 The signal is given and a beautifully filmed scene bursts forth as settlers rush to stake claim to the best land in Oklahoma. Dixie tricks Yancey and ends up claiming a stake that he had previously scouted for himself. 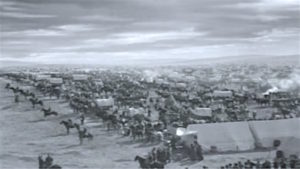 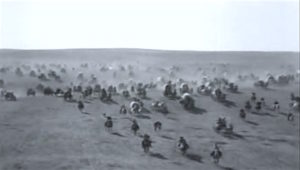 “And in no time, no time mind you, they snatched up every piece of land that was worth having. And by nightfall, by nightfall there wasn’t an acre. Think of it there was not an acre left of out of that 2 million. The onliest part I wanted was the ground we stood on, and well the girl got that quarter section.” –Yancey

Yancey returns home to his family in Wichita. He decides they are moving to Oklahoma to be part of a new town and that he will publish a newspaper, “The Oklahoma Wigwam.” His wife, Sabra (Irene Dunne), is not sure about going to this wild place with her baby son, but she loves Yancey and wants to stand by him. 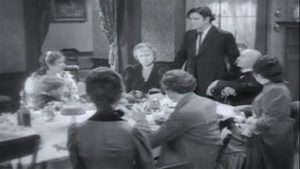 “I won’t bring up my boy in a town like this! I’m going back home. –Well don’t you think you’d better wait until morning, honey? You know a good night’s sleep and things are gonna look entirely different.” –Sabra and Yancey

Yancey cuts quite a dashing figure in the Oklahoma territory. He wears a huge white hat, a tailcoat and knee-high boots. Famous for his fiery editorials on the plight of the Osage tribe, the townspeople ask Yancey to become their preacher. He presents his first impromptu sermon in a gambling hall, the only building in town big enough to hold a service. (If you’re quick, you’ll notice that Yancey is preaching in front of reclining nude painting!) The town is rough, and Sabra learns to adapt to raising her two children in dangerous, uncomfortable circumstances where men shoot guns in public. 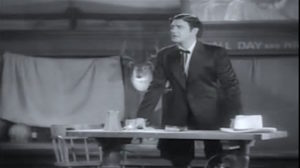 “Fellow citizens, I have been called upon to conduct this opening meeting of the Osage First Methodist Episcopalian Lutheran Presbyterian Congregational Baptist Catholic Unitarian Hebrew Church. During the course of my career as lawyer and editor I’ve been required to speak on various occasions on many subjects. … I’ve been called upon to defend and convict horse thieves, harlots, and murderers. … This, fellow citizens, is the very first time that I have ever been required to speak the Word of God in His Temple.” –Yancey

In August 1893, President Cleveland announces the opening of the Cherokee strip for another land run. Yancey is determined to go, despite Sabra’s pleading, and he disappears for five years. He’s an adventurer and pioneer at heart, and the town is getting a bit too settled for him. 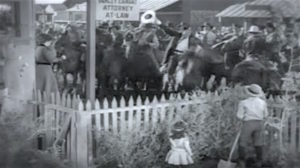 “Was Mother right when she said you’d go for the adventure always? Hmm, five years, the longest time you’ve ever stayed in one place. Been here only four. –Well don’t you realize, Sugar, this is a new empire. Now we’ll see it grow before our very eyes into a new state!” –Sabra and Yancey

Yancey returns in 1898. His old nemesis, Dixie Lee, is on trial for running a house of ill repute. Besides being an editor and preacher, Yancey is a lawyer too, and in a dramatic scene, he fights for Dixie’s rights, against the wishes of Sabra and all her society friends. 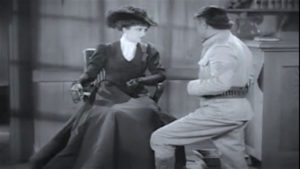 Jump to 1907. The town now has sturdy buildings and trolley cars. The Osage tribe has discovered oil on their land, and Yancey is running for governor of Oklahoma. Yancey’s main platform is to give the Osage full citizenship in the state of Oklahoma. Sabra and Yancey are in conflict because of their son, Cim, who wants to marry Ruby Big Elk, the daughter of an Osage chief. Today, a scene like this is uncomfortable to watch, however it gives a clear representation of the racism of the day toward Native Americans. 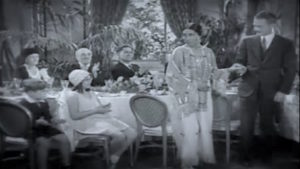 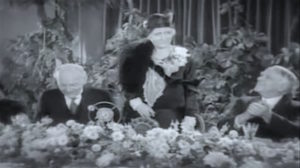 By 1929 the town has become a metropolis, dominated by skyscrapers. Yancey has been gone for the past twenty years, wandering the world. Sabra learns that he fought in World War I and had dyed his hair in order to appear young enough to fight. The Oklahomans elect Sabra to the House of Representatives. After all, she’s been running all of Yancey’s business interests for the years he’s been away.

Though the cinematography, costumes and art direction are all first-rate, Cimarron is a bit dated today. It’s an early talkie, so the sound is not always clear, and some of the acting seems stilted. The costumes are historically accurate, and each social class is dressed appropriately. 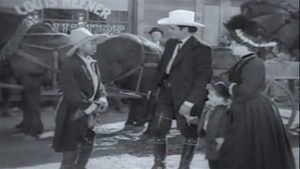 Cimarron is a view into an important time in the history of the American West, and is an accurate depiction, warts and all. Take a look and you’ll see why it won top film honors for 1931.