DURING WORLD WAR II, citizens tightened their belts by raising vegetables in Victory Gardens. And because of war rationing, it was difficult to get staples such as sugar and butter. With all this self-denial, vicarious pleasure could be had by reading about scrumptious gourmet meals home-cooked in cozy settings. Barbara Stanwyck’s character brings these pleasures to her reading public in Christmas in Connecticut (1945).

“I took crisp lettuce, romaine and cricket endive from my own garden for my husband’s favorite salad. For this I made a rich, creamy blue-cheese dressing. Then to prepare roast duck his favorite way, I rubbed salt and pepper inside, then browned the duck in its own fat …” –“Diary of a Housewife” by Elizabeth Lane, America’s Best Cook, in “Smart Housekeeping” Magazine

In the dramatic opening scene of Christmas in Connecticut, a German submarine torpedoes an American destroyer and frantic Morse code messages go out before the ship sinks. Two sailors who survive the attack take refuge on a life raft. One sailor, Jefferson Jones (Dennis Morgan), hallucinates about epicurean meals during the 18 days he spends on the raft. 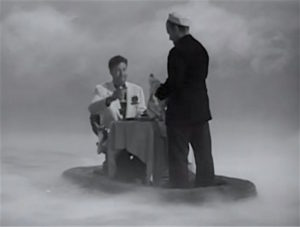 Jeff is rescued and put in the hospital. His nurse, Mary Lee, whiles away the time by reading him “Smart Housekeeping” magazine. The doctors won’t let him eat solid food and it practically makes him crazy to hear about the delightful meals prepared by Elizabeth Lane, “America’s Best Cook.” Mrs. Lane, a 1940s version of Martha Stewart, writes about her idyllic farmhouse and daily life with her husband and baby. She describes such domestic minutiae as her search for a rocking chair, how she uses her spinning wheel, and how she puts her cow to bed at night. 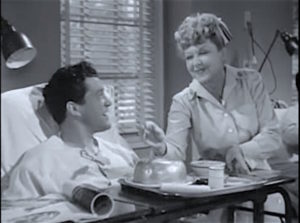 Alexander Yardley (Sydney Greenstreet) is the publisher of “Smart Housekeeping” and he sees the fantastic publicity potential when Mary Lee writes to him to ask if poor Jefferson could spend Christmas with Mrs. Lane’s family. “American Hero Spends Christmas on Perfect Farm – what a boost for circulation!” crows Yardley. 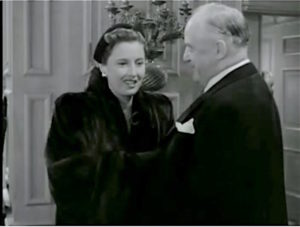 The problem is that Elizabeth Lane (Barbara Stanwyck) is a total humbug. She’s an excellent writer, but a humbug all the same. Today we know that famous homemaking media stars usually have a staff of 400 working for them, but Elizabeth apparently is a fake. She lives in a New York City studio apartment and her culinary skills are limited to placing sardines on crackers. She has no husband, no baby, she has no idea how to bathe or feed a baby, and she certainly has no idea how to take care of anyone’s cow. And now, with Mr. Yardley’s plan, she is suddenly in very big trouble.

“I’m having fun, I admit that, but if I’m making fun of anybody, it’s Elizabeth Lane. Oh, she’s so smart, knows all the answers, gets herself into a mess and hasn’t the moral courage to get herself out of it.” –Elizabeth

John Sloan (Reginald Gardiner) is an architect and happens to own the perfect idyllic farm in Stanfield, Connecticut. Sloan’s farm looks like a Currier and Ives print. The exterior of the house is stone and timber, the inside is all chintz and floral wallpaper, and in the barn is a sleigh with a matched team. The deal Sloan makes with Elizabeth is that, in order to let her use the house to play out the ruse with Jeff and Mr. Yardley, she has to marry him. 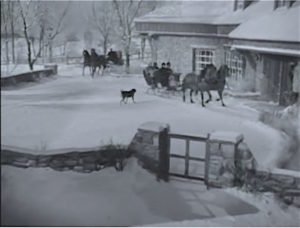 Sloan brings a judge to the house to perform the ceremony, but Jeff and Mr. Yardley arrive too early, so the wedding doesn’t take place. Once Elizabeth meets Jeff, it appears that Sloan’s wedding plans are doomed.

Rounding out the fake family are Felix (S. Z. Sakall) and Norah. Felix Bassenak owns a Hungarian restaurant near Elizabeth’s apartment in New York City. It is he who provides all her recipes, and he actually feeds Elizabeth most of the time. Elizabeth brings “uncle” Felix to the farm to cook for the Christmas guests. 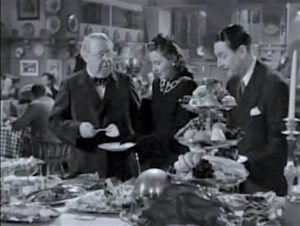 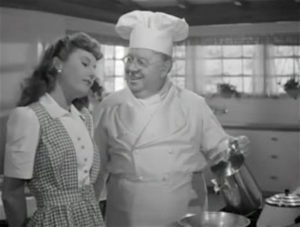 Norah is Sloan’s maid, who helps with the war effort by providing daycare for the babies of mothers who work in the defense factory. Elizabeth plans to pose one of these babies as the Lane baby, but the mothers work different shifts at the factory, so Elizabeth ends up with different babies at different times. 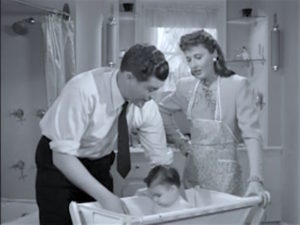 While decorating the Christmas tree, Elizabeth wears a stunning long black gown with a bolero jacket trimmed in white fur. Stanwyck’s outfits are designed by Edith Head, so Elizabeth always looks charming, despite all her problems. 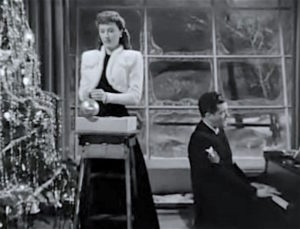 On Christmas night there’s a country dance at the town hall. Elizabeth completely enjoys the reels and square dancing with Jeff. Love finally finds her, just as she’s pretending to be the perfect married mother living in the country. 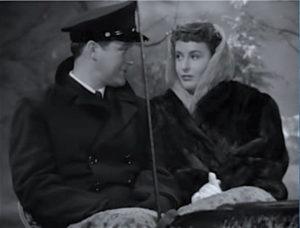 “—If it’s not asking too much, will you explain? –Well, it’s all very simple, I have never lived on a farm before. – Never lived! –No, I have no husband and no baby. –And she can’t cook. –No husband! No baby! Well of all the dirty, scoundrel-y tricks to play!” –Elizabeth, Yardley, John

For a good screwball comedy, a sweet holiday romance, and some great cooking and homemaking tips try Christmas in Connecticut this holiday season.

Christmas in Connecticut is on my list for must-watch-during-holidays. I love the country house in the snow, the menus (including cold chicken in the fridge), the beautiful tree, and the fun and romance.