The fire and spice of Dorothy Dandridge is preserved for us in Carmen Jones (1954), a modernization of Bizet’s opera. Carmen Jones moves Bizet’s story of Carmen from a cigarette factory in Spain to a parachute factory in the southern United States. Otto Preminger directed the all-black cast, with Bizet’s music and lyrics arranged by Oscar Hammerstein II. 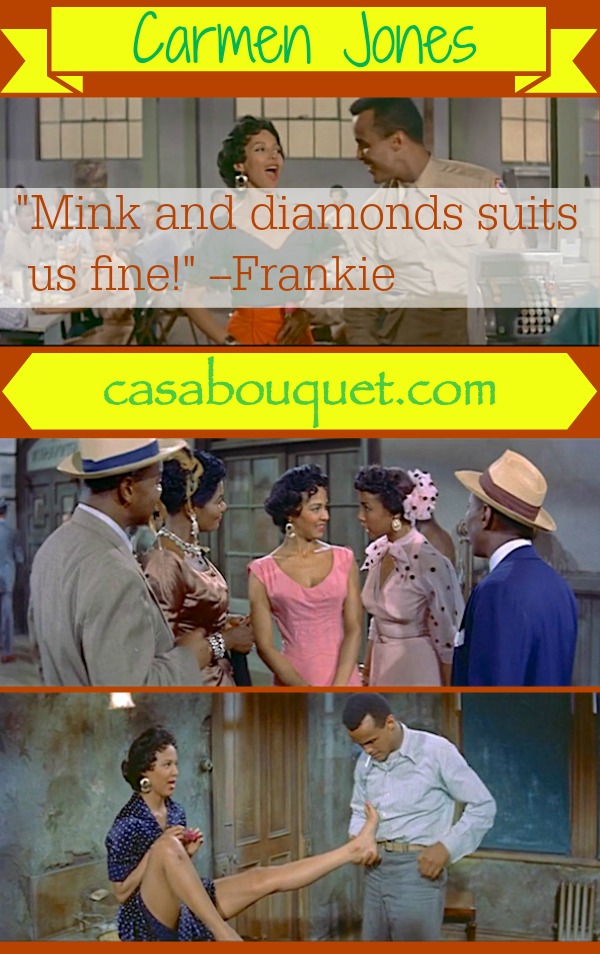 Dorothy Dandridge’s life has come to epitomize the triumphs and tragedies experienced by black actors in the mid-century movie industry. The actress began her career as a child, appearing in a sister act at Harlem’s famous Cotton Club. Her first movie role was a bit part in A Day at the Races with the Marx Brothers. In 1941, she sang a specialty number, Chattanooga Choo Choo, with the Nicholas Brothers in Sun Valley Serenade. Dandridge struggled for good roles in Hollywood, eventually becoming the first black woman to be nominated for Best Actress in the Academy Awards. Sadly, she died too young.

Carmen Jones begins in a dusty southern town. Cindy Lou (Olga James) arrives at the gates of a military parachute facility to visit her boyfriend, Joe (Harry Belafonte). Joe is about to leave for officers’ flying school. He takes Cindy Lou to the mess hall for a goodbye visit. Carmen (Dorothy Dandridge) enters the mess hall and mesmerizes the parachute workers and the soldiers with her double-loop dangling earrings, low-cut peasant blouse, tight red skirt, and very high heels. Carrying a red rose, she sings Love’s a Baby That Grows Up Wild.

“You go for me and I’m taboo
But if you’re hard to get I go for you
And if I do, then you are through
Boy, my baby, that’s the end of you.” –Carmen

Carmen could have her pick of any man in the room, but she sets her sights on Joe, despite his love for Cindy Lou.

“I don’t waste no time. Pick me, baby? –Wasting your time right now, sergeant. Wind’s blowing me another direction, ain’t no use arguing with the wind.” –Sergeant and Carmen

Carmen gets into a terrible brawl with Frankie (Pearl Bailey). The sergeant orders Carmen to civilian jail and he commands Joe to take her there. Joe unwillingly puts her in a jeep for the trip to the nearest town. At the first train crossing she escapes, jumping out of the jeep and onto the passing train.

Joe chases the train and captures Carmen. She’s like a wild bird that can’t stand to be locked up. He has to tie her down to control her. They proceed to their destination, Masonville, more than fifty miles away. Carmen convinces Joe that she knows a shortcut, but not even his jeep can handle the rough backcountry. Abandoning the vehicle, Carmen and Joe hike to her nearby hometown to wait for a train to Masonville.

Carmen cooks supper for Joe at her grandmother’s house. She seduces him then runs away while he sleeps. This seduction ends Joe’s hopes for flight school. He was under orders to get Carmen to jail, and her escape lands him in the stockade. A very sad and confused Joe sings of his newfound love for Carmen.

The next time we see Carmen she is wearing a pink princess-line dress with a deep flounce. She’s on her way to Billy Pastor’s Café, her favorite nightspot, a roadhouse tucked away in the woods. Frankie and the other girls from the parachute factory are there, having a high time. Frankie leads the partying by singing Beat Out That Rhythm on the Drum.

“–You still carrying a blow torch for that boy in the stockade? You know I reckon by now it’d be so hot you could wrap it up and send it to the Navy. They could use it to weld battleships apart! –That’s how it is.” –Frankie and Carmen

Husky Miller (Joe Adams), the famous boxer, arrives at Billy’s in a very nice car. The crowd runs out to see him as he sings Stand Up and Fight Until You Hear the Bell. Carmen Jones catches Husky’s fancy and he makes a play for her.

He tells his manager to send Carmen to Chicago to be with him, but she gives up this chance for the high life to wait for Joe.

“–I was just thinking how nice it would be to have the pleasure of your company in a drawing room. Showing you around the fancy stores in Chicago. Footing the bill for some of the things you might want to buy like a diamond ring or a mink coat. –Mink! –Of course now if that ain’t good enough, maybe there’s another kind of fur they invented. –No, we’re just old fashioned girls, mink and diamonds suits us fine.” –Rum, Myrt, & Frankie

Joe gets out of the stockade and heads straight to the café to meet Carmen. She’s thrilled to see him but he has news: He’s once again been given the chance to go to flight school. Carmen can never delay gratification. She convinces him to go AWOL, joining her friends for fun in Chicago.

Joe and Carmen end up living in a dingy flat right next to the El. The heat between Joe and Carmen is still strong. She paints her toenails then gives her foot to Joe to blow dry, revealing some very beautiful gams. The lovers have run out of money so Carmen goes to Husky’s gym to see if she can borrow some. She finds her old friends Frankie and Myrt (Diahann Carroll) eating well and wearing gorgeous clothes and jewels. She finds that Husky has been waiting for her, so she decides to throw her lot with the fighter’s crowd. She wants those new clothes and the nice hotel Husky has promised.

Carmen’s lack of patience and restraint doom her and anyone who is attracted by this beautiful, poisonous butterfly of a woman. The story gets added drama from the steamy setting and the contrast between Carmen’s life in the South and the riches of Chicago. Dorothy Dandridge and Harry Belafonte are a beautiful couple and their scenes sizzle. It’s hard not to feel melancholy about Dorothy Dandridge while watching her vibrant performances. But instead, let’s celebrate that we can still watch her and admire her artistry.