You are here: Home / Culture / Lisa’s Home Bijou: Cabin in the Sky

ETHEL WATERS was one of the first black divas to cross-over and successfully sing pop tunes. In Cabin in the Sky, the 1943 film version of the hit Broadway musical by Lynn Root, John Latouche, and Vernon Duke, Waters recreates her stage role on film accompanied by a stellar cast. Waters was a skinny, teenage blues singer who moved on to star in the theater, nightclubs and film. Later in life she became an evangelist.

Cabin in the Sky is, according to the press materials, “a story of faith and devotion from legend, fable, and fantasy.”  We first see Petunia Jackson (Ethel Waters) who is making every effort to get her husband, Little Joe (Eddie ‘Rochester’ Anderson), to church. Little Joe has a problem with gambling – he’s hooked on his “calamity cubes” (dice). He’s sure the devil’s got him since he can’t seem to throw his dice away into the fire. 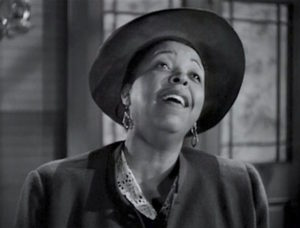 “Right now I’m wrestling with the Devil. While I was looking for the necktie in the bureau drawer, I also found two calamity cubes. And I ain’t throwed ‘em away yet!” –Little Joe

Petunia manages to get Little Joe into church but just when the time comes for him to step forward to testify and receive salvation, his bookies lure him outside. They take Joe to Jim Henry’s Paradise, the downtown hotspot, to gamble with Domino Johnson (John ‘Bubbles’ Bubblet), big money from out-of-town. Shots ring out and Petunia arrives at the club to find Little Joe wounded. 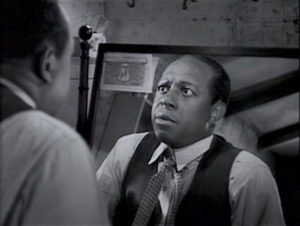 “–Little Joe, rise up from that bed and report for duty. –Report? Report where? –Now where do you suppose you’d be reporting? A shiftless no account like you is! Get up!” –Lucifer Jr.  and Little Joe

Joe is seriously ill. As he lays in the bed, the devil’s men and the angels fight over his soul. God gives Joe six months to straighten up or he goes to Lucifer. The devil’s men do their plotting to capture Joe’s soul at the Hotel Hades. 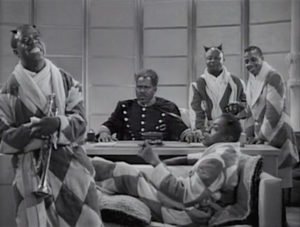 They concoct a plan — Joe will win the sweepstakes and become rich. Then they’ll send in Georgia Brown (Lena Horne) to complete his downfall. Meanwhile, Petunia, using somewhat dishonest means, proves that the local hustlers have been cheating Joe all along.

“Oh Lord, please forgive me for backslidin’. But sometimes when you fight the devil you got to jab him with his own pitchfork.” –Petunia

After winning his windfall, Little Joe tries to resist the temptations put in his way, but between Georgia’s charms and the devils’ determination, he doesn’t have much of a chance. He starts spending all his time entertaining Georgia and hanging out at Jim Henry’s Paradise. 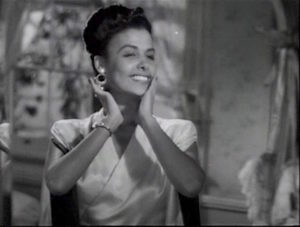 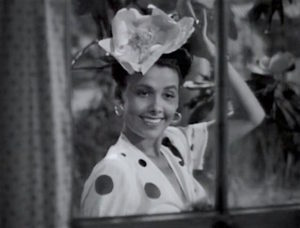 “–Of course, I ain’t saying I altogether forgot you. You ain’t easy to erase from the mind, once a man gets to know you good like. –Why does you want to forget me, sugar?” –Little Joe and Georgia 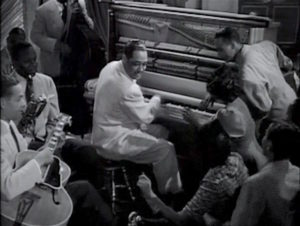 A wonderful scene takes place at the Paradise. Duke Ellington is playing at the club. The dancers start off with a languid slough foot. The tempo builds until the whole club is whirling in an energetic lindy hop. 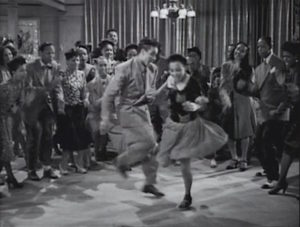 Domino joins in with a memorable tap solo. 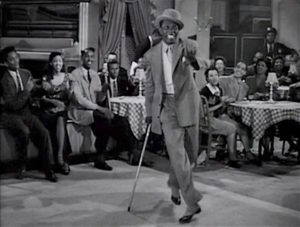 Petunia arrives, ready to fight Georgia’s fire with fire. She sashays in, dressed to kill, and orders a double King Kong.

“–Oh I guess she’s just jealous ‘cuz she ain’t got what I got. –Quit kiddin’ yourself, not only have I got everything you got but a whole lot more. –Well you ain’t got Little Joe. –Now that’s the main thing you got I don’t want. And if I run across any other second hand junk I’ll pass that on to you!”  –Petunia and Georgia

The film features a great set of songs, some by E.Y. Harburg and Harold Arlen: 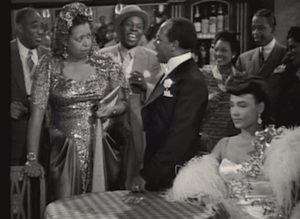 There are a great set of supporting players in the film to watch for: Louis Armstrong as one of the devil’s men, Butterfly McQueen as Lily, and Ruby Dandridge (Dorothy’s mother) as Mrs. Kelso. The film was directed by Vincente Minnelli and Irene served as costume designer.

Cabin in the Sky has great music, comic shenanigans, pathos, and top-notch dancing. See it for a nice showcase of the divine abilities of Ethel Waters.

Related Links for Cabin in the Sky