Blue Hawaii (1961) is the first of the three Hawaii films starring Elvis Presley. The soundtrack album for this movie was a huge hit and three of his most famous songs are here: Blue Hawaii, I Can’t Help Falling in Love with You, and the Hawaiian Wedding Song. 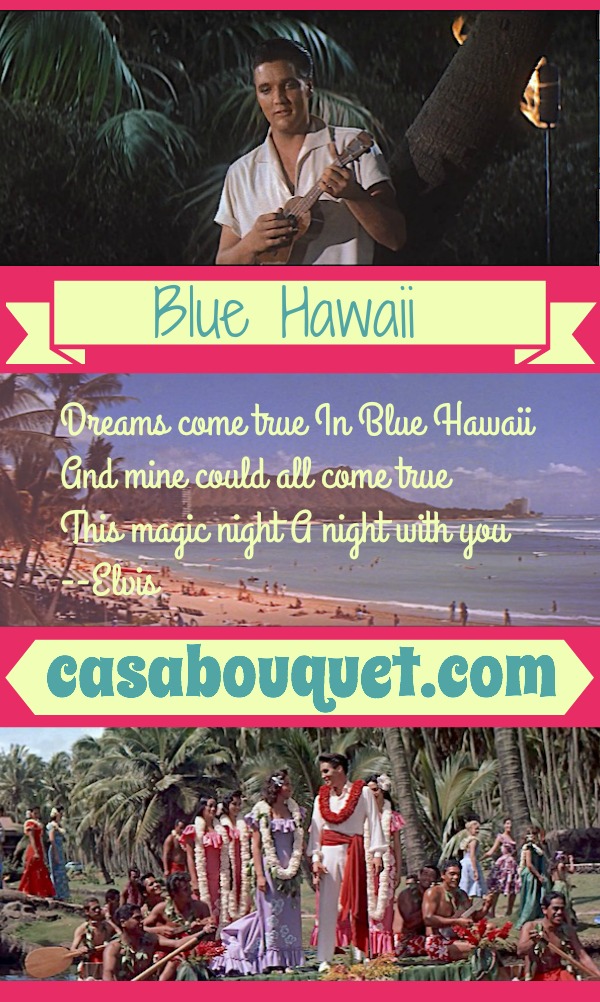 Elvis plays Chad Gates, a young man who is returning to his home in Oahu from military service in Italy. His father is a pineapple company executive and his mother is a social/class-conscious Southerner. Sarah Lee (Angela Lansbury) is a Southern belle who is worried about associating “with the finer elements.” They live in a beautiful home in Manoa or Tantalus or Kahala (it depends if you believe the script, the views out the windows, or the road signs!). Chad is a Hawaiian beach boy at heart and wants to make a living on his own, incorporating his love of Hawaii.

Chad’s girlfriend is Maile (Joan Blackman), a descendant of a Hawaiian royal family and a tourist bureau employee. Chad’s friends are Hawaiian and make a living playing music.

Chad defies his parents and begins working as a tourist guide for Maile’s company. His first client is a schoolteacher, Miss Prentice, escorting 4 high school girls. This sets up the adventures, conflicts, and fantastic scenery in the film.

The many songs keep the movie rolling along.

I Was Almost Always True to You: Maile finds Waihila (Hilo Hattie), selling leis at the airport. They run out to the tarmac to meet the plane and greet Chad arriving home from the Army. Chad sings to Maile as they drive to the beach, at Hanauma Bay. This is the old days, it’s nearly deserted! Chad has an old grass shack he built with his friends. He plans to live there and surf, dive, and play music.

Aloha ‘Oe: Chad and Maile are out swimming in the bay and meet up with an outrigger with 4 of Chad’s friends. The song begins with the Hawaiians singing the first verse of the famous song in Hawaiian. Chad and his friends sing while riding in the outrigger. They have two guitars and a conch shell.

No More: Chad and the boys sing on the beach. Chad is remembering his romantic escapades in Naples. Now the boys have guitars, bongos, steel drum, and pahu (coconut and sharkskin drum).

I Can’t Help Falling in Love with You: Chad escapes his elegant home to go to a birthday party in Haleiwa. It’s Maile’s grandmother’s birthday. The boys are leading a Tahitian song when he arrives. Chad sings to Mrs. Maneka, Maile’s grandmother.

Rock A Hula: Chad’s mother throws a big society welcome home party for Chad. The beach boys are the band for the party. Chad sings with his friends, swinging uli uli (gourd rattles) while he does classic Elvis gyrating.

Let’s go on a moonlight swim: Maile’s boss (Howard McNear) decides to hire Chad as a tourist guide and sends him to the Hilton Hawaiian Village to meet a schoolteacher. Miss Prentice has 4 teenage girls with her. Chad sings to the girls while driving them through the pineapple fields.

Ku’u Ipo: Chad sets up a hukilau at the beach for the guests. Chad sings a love song (Sweetheart) with his ukulele at the hukilau. Chad gets everyone down to the beach to help pull in the nets full of fish (hukilau). They cook the fish and eat on the beach.

Ito Eat: Chad is inspired to sing a calypso song about how much his friend Ito likes to eat.

“Ito is an eating boy / He never get enough of fish and poi / He eat everything he don’t care what / He even eat the shell from the coconut”–Chad, boys and girls

Slicin’ Sand: Everyone starts to rock, kicking sand in their dance.

Hawaiian Sunset: the Island Inn is having a luau party the next evening. Chad invites his father’s big boss to the party, Mr. Kelman. He and Miss Prentice share a mai tai with two straws. Chad is on stage with his ukulele, his band, and 2 hula dancers in cellophane skirts.

Beach Boy Blues: A drunk tourist from Tulsa starts a fight with Chad. The police break it up and Chad is in jail with his buddies. They sing a blues song in jail. Fortunately, the boys got arrested with their instruments.

Kaua’i, Island of Love: Chad decides to start his own tourist bureau with Miss Prentice and the girls as his first clients. They fly to Kaua’i and the fabulous Coco Palms resort. Chad sings as he takes the girls horseback riding along the Coconut Coast.

Hawaiian wedding song (Ke Kali Nei Au): After a lot of drama, Chad makes up with Maile and they decide to marry. The ceremony is at the beautiful lagoons at Coco Palms.

Chad tells his parents about his job. His mother continues to be upset that he is not taking his place at the pineapple company.

Featured along with Hanauma Bay, and the Hilton Hawaiian Village on Waikiki are the Punchbowl heights above Honolulu, the pineapple fields at Wahiawa, and the famed sunset torchlighting ceremony at Coco Palms in Kaua’i.

A few Hawaiians appear in this film. Hilo Hattie (Clara Inter) was the famous comedic singer and dancer playing a lei greeter at the airport. Bella Richards was a revered kumu hula (hula teacher) from Kailua on Oahu. Lani Kai was a singer, songwriter, and actor. He appeared on Adventures in Paradise and the original Hawaii Five-O. Frank Atienza was a regular on Magnum, PI. Ralph Tiki Hanalei was an actor with appearances on Adventures in Paradise, Hawaii Five-O, and Hawaiian Eye.

Elvis was in his 20s in Blue Hawaii and makes a good acting effort. Along with being a lover and a singer, he has conflict with his parents and has to deal with petulant tourists. He is very handsome swimming and in his Hawaiian shirts. You can see what he might have become as an actor.

For music, romance, and views of early statehood Hawaii, you can’t go wrong with Blue Hawaii!