You are here: Home / Culture / Lisa’s Home Bijou: “Birth of the Blues”

ONE OF THE HOMES OF JAZZ AND THE BLUES is Basin Street in New Orleans, the setting for this 1941 musical starring Bing Crosby and Mary Martin. 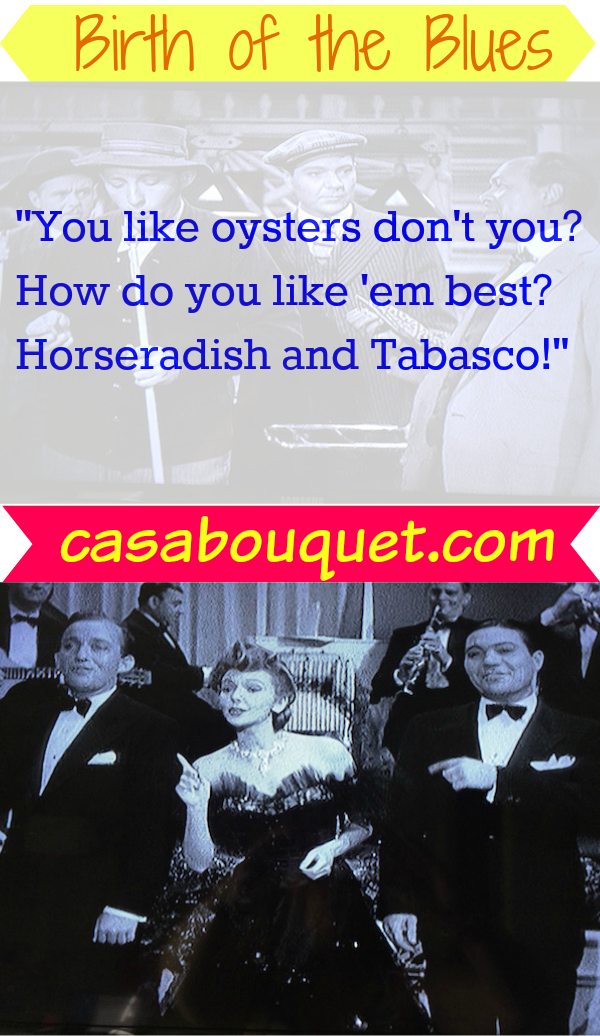 Let’s get one thing straight to begin with: Bing Crosby did not invent the blues. With apologies to real New Orleans bluesmen like Louis Armstrong, Buddy Bolden, and Jelly Roll Morton, this movie is enjoyable simply because Bing Crosby and Mary Martin have so much fun in it.   ”Birth of the Blues” is a fictional tale of a bunch of New Orleans white boys (plus one from Memphis) trying to convince the city’s high society to develop a taste for jazz. 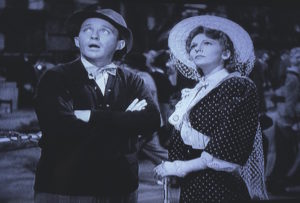 The story opens in New Orleans in the 1890’s, where Jeff Lambert (Bing Crosby) gets caught practicing his clarinet with the laborers down on Basin Street. The film then jumps to Jeff as an adult, looking for a few white jazz players to complete his band, “The Basin Street Hot-Shots,” (which appears in reality to be Jack Teagarden‘s band.) The first job they land is to play between features in a silent film theater. The band gets kicked out of the theater because the patrons find the jazz they play to be scandalous.

“- I don’t know, Jeff, folks seem to like it. – Of course they do ‘cuz they don’t know no better. You like oysters, don’t you? – Sure. – How do you like ‘em best? – Horseradish and Tabasco. – Well, you see what I mean? Up til now folks never had Tabasco in their music. We’re gonna improve their taste. – You got it!” — Pepper and Jeff

Betty Lou Cobb (Mary Martin) joins the band as a singer, and she enlists Louie (Eddie “Rochester” Anderson) to teach her how to scat. His involved explanation is the comedic highlight of the movie. The Basin Street Hot Shots finally land a gig in a café, during which time Betty Lou invents the famous “Cake Walk,” an important dance of the period. (Note: The cakewalk, a Southern dance, was performed at the 1876 Centennial Exposition and became a staple of touring minstrel shows. The cakewalk was first filmed in 1903.) During this same gig, the bass player invents the technique of playing without a bow. 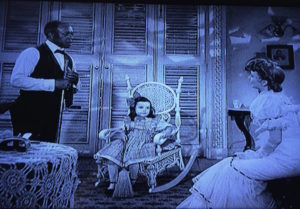 “- Of course, I mean, how can I learn to sing like you and Jeff? – Well I just open my mouth and it comes pouring out sweet and hot. … – You and Jeff wouldn’t sing it that way would you? Tell me, Louie, what’s the trick to it? – It’s very easy, of course it’s not hard to explain. For instance, take the bass. All songs have a bass. See that, just keeps on going. Of course it’s not going nowhere… Then you take a lot of notes and surround that old bass and get closer and closer…” –Betty Lou and Louie

Bing, Mary, and Jack Teagarden do a nice production number by Johnny Mercer, “The Waiter, the Porter, and the Upstairs Maid.” The movie winds up with the band leaving for the bright lights and big time of Chicago and fades out showing clips of jazz greats — Ted Lewis, Duke Ellington, Louis Armstrong, Paul Whiteman, Benny Goodman, Tommy Dorsey, and Jimmy Dorsey.

This film is loaded with great music, including “Birth of the Blues,” “Georgia Camp Meeting,” “By the Light of the Silvery Moon,” “After the Ball,” “St. Louis Blues,” “Waiting at the Church,” “Cuddle Up a Little Closer, Lovey Mine,” “Wait ‘Til the Sun Shines, Nellie,” “Melancholy Baby,” and “St. James Infirmary.”

Mary Martin spent most of her career on Broadway and is famous for the roles she created in “South Pacific”, “Peter Pan”, and “The Sound of Music”. She did not make many movies, and this is one of the few available on video. It’s a real treat to see her trademark flirtatious style in action. 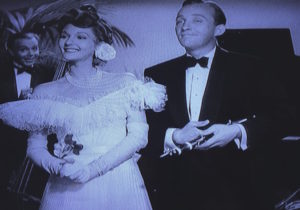 will give a historical perspective.

Related Links for “Birth of the Blues”

In “Lisa’s Home Bijou”, I’ll share my reviews of classic films and hopefully inspire you to have a few film festivals of your own. I am proud to claim Betty Grable as a distant cousin. My “film career” began when my parents named me for Leslie Caron’s character in “An American in Paris.”