The Big Sleep (1946) is a classic film noir that has women, Los Angeles at night, gangsters, and a persistent private detective. Humphrey Bogart and Lauren Bacall star in a complicated Raymond Chandler plot with fantastic dialogue, directed by Howard Hawks.

The VICE: Gambling (and a host of others!) 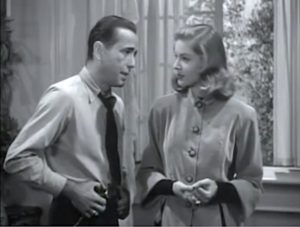 The General used to employ Sean Regan, a former rum-runner and Commander in the Irish Republican Army. The General was very fond of him and is upset because he disappeared without a word. They also discuss A.G. Geiger, a rare book dealer, who has sent a pile of gambling debts owed by Carmen to the General. 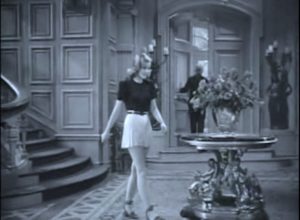 General Sternwood is very ill with paralyzed legs, waiting for “the big sleep.” He has to spend his days in his very warm hothouse. 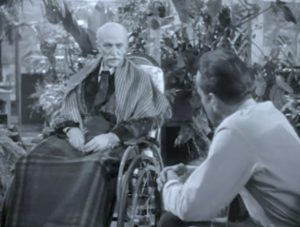 “Orchids… Nasty things! Their flesh is too much like the flesh of men. Their perfume has the rotten sweetness of corruption.” – General Sternwood

Well, that’s just the beginning of The Big Sleep. Vivian is very interested in what Marlowe is doing for her father, and he won’t tell her. There are a lot of characters mixed up in this business. 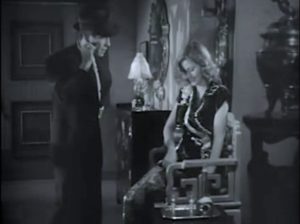 Owen Taylor is the Sternwood’s chauffer. He has a thing for Carmen. Owen Taylor shoots Geiger to get Carmen’s pictures. Joe Brody gets the pictures away from Taylor before he dies.

Marlowe and his police friend, Bernie (Regis Toomey), go down to the pier at Lido (Santa Monica) at 2 am to watch them fish a car belonging to the Sternwoods out of the ocean. The body inside is Owen Taylor. The doctor says he was hit in the head before the car went off the pier. 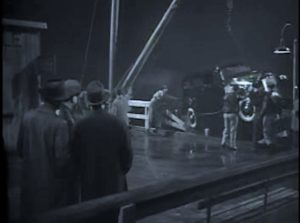 Joe Brody, a small time hood, has also blackmailed General Sternwood with Carmen’s gambling debts. His girlfriend is Agnes, Geiger’s shop assistant. Marlowe goes to Geiger’s bookstore after his murder and discovers Lundgren and Brody packing up the whole back of the store.

Marlowe jumps in a cab with a sassy girl driver. She’s ready to tail people and help him. He follows the station wagon full of books to the Randall Arms apartments and finds Joe Brody lives there. 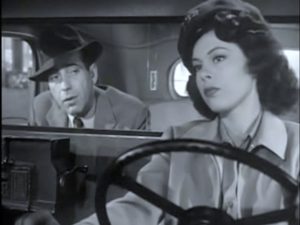 That night, Marlowe stakes out the Randall Arms. He sees Vivian pull up and enter the building. He muscles his way into Joe’s apartment.

“My, my, my, such a lot of guns around town and so few brains. You know you’re the second guy I met today that seems to think a gat in the hand means the world by the tail.” –Marlowe

Joe holds a gun on him and Vivian and Agnes are there too. Marlowe accuses Joe of killing Geiger. He wants the picture of Carmen. The doorbell rings and there is Carmen, waving a gun at Joe. Joe turns over the picture. The sisters leave. Marlowe figures out that Joe was at Geiger’s house. Owen Taylor shot Geiger and took the pictures. Somehow Joe got the pictures from Taylor before he died. 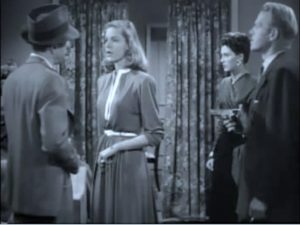 The doorbell rings again and Joe is shot. Marlowe gives chase and it’s Carol Lundgren. The two of them drive up to Geiger’s house.

Lundgren tries to fight with Marlowe. Marlowe knocks him out and ties him up. Poor dead Geiger is back in the house, laid out all pretty in the bedroom. Marlowe calls Bernie to come see the body and arrest Lundgren.

Eddie Mars runs a casino near Manhattan Beach and has an army of thugs working for him. Vivian tells Marlowe that Sean Regan ran away with Eddie’s wife, Mona. 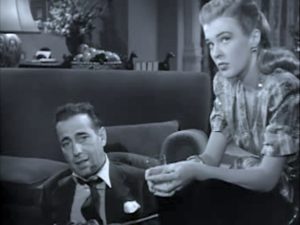 One evening Marlowe drives out to Mars’ casino where Vivian is holding forth singing with the combo, “And her tears flowed like wine.” Marlowe and Eddie talk and Eddie warns him off looking for his wife or Sean Regan. Vivian asks for a ride home, right after she wins a large amount of money from the house. Marlowe figures they plan to rob Vivian in the parking lot and he decks the thug. Vivian still won’t tell Marlowe what is going on between her and Eddie Mars. 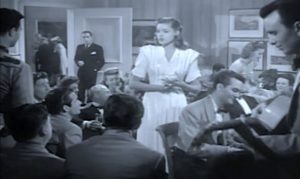 Agnes has another boyfriend, Harry Jones (Elisha Cook, Jr.). Marlowe checks the car that’s been tailing him and sees it is registered to Harry Jones. Two guys beat him up in an alley and Harry helps him. 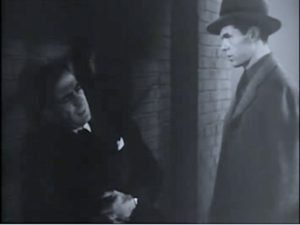 Harry tells Marlowe he has something to sell. He offers him info on Eddie Mars’ wife for $200. He will take him to Agnes, Geiger’s assistant.

When Marlowe arrives at the office for the meeting Jones is being threatened by a thug from Eddie Mars. Jones gives the thug Agnes’ location, which turns out to be fake. The thug gives Jones poison to drink before Marlowe can help.

As the movie goes on, we find out about three more murders, and some very memorable scenes.

Across the street from Geiger’s bookstore, Marlowe meets Dorothy Malone in the Acme Book Store. She knows he is asking for phony rare books. She closes the store for the afternoon and shares some rye whiskey with Marlowe. 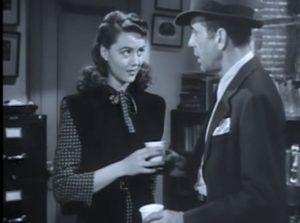 “—Where did you find her? –I didn’t find her. … I haven’t been here, you haven’t seen me, and she hasn’t been out of this house all evening. –That bad?”—Vivian and Marlowe

At a nightclub, Marlowe and Vivian meet. He still can’t figure out why she wants him off the case. 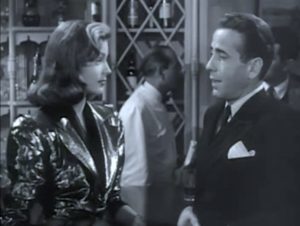 “Well, speaking of horses, I like to play them myself. But I like to see them work out a little first. See if they’re front-runners or come from behind. Find out what their whole card is, what makes them run. –Find out mine? –I think so. –Go ahead. –I’d say you don’t like to be rated, you like to get out in front, open up a lead, take a little breather in the back stretch, and then come home free.” –Vivian and Marlowe

When Marlowe gets home, Carmen is in his apartment.

“How’d you get in here? –Bet you can’t guess. –How ’bout I can. You came in through the keyhole, like Peter Pan. –Who’s he? –A guy I used to know around the poolroom. –You’re cute. –I’m getting cuter every minute.” Marlowe and Carmen

You can watch The Big Sleep many times without being able to figure out all the twists and turns. It’s a great cast and so much fun to watch the chemistry between Bogie and Bacall. 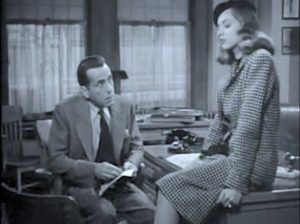 Resource links for The Big Sleep