Film Festival:The City by the Bay

BARBARY COAST takes us back to the rough-and-tumble days of the California gold rush. Miriam Hopkins stars in 1935’s Barbary Coast, a successful blend of action, history and romance set in one of our country’s most beautiful cities during one of its most notorious eras.

The Barbary Coast of Africa was known for centuries as a haven for pirates and buccaneers. When the California Gold Rush of 1849 brought miners and adventurers to the shores of San Francisco Bay, part of the city near the docks became a haven for a new breed of pirate: those who profited from the gold miners. As a result, this section of San Francisco also became known by the same name as its African predecessor.

Shiploads of men would pass through the Golden Gate to San Francisco, ripe for fleecing by unscrupulous residents of this lawless city. On one foggy New Year’s Eve, the Flying Cloud, a square-rigged vessel from New York enters the harbor. Among the ship’s many male passengers is one lone woman, Mary Rutledge (Miriam Hopkins). Colonel Marcus Aurelius Cobb (Frank Craven), a kindly newspaper reporter, pays Mary’s clearance papers and helps her ashore. 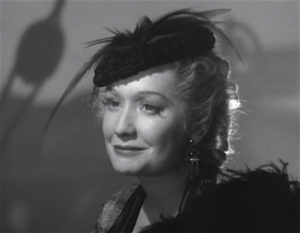 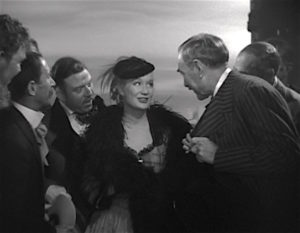 “Ahoy! Who are you? –The Flying Cloud. Two hundred and twenty days out of New York, and 15 days trying to find your blasted harbor! –Well, nobody asked you to come. –Got anything in this hog-end of the world except fog? — Sure, we’ve got gold!” –Captain and harbor pilot

This beautiful, petite blonde is an oddity in San Francisco, a city populated by males, and she is immediately surrounded by admirers on the docks. Mary has traveled all the way to San Francisco to marry Dan Morgan, a rich mine owner. But on shore, she is told that Morgan was recently killed while gambling away his gold strike. Certain that she should re-board the Flying Cloud, the men tell her, “San Francisco is no place for a woman!” But she is resolved to stay in this exciting new place. She hears about Louis Chamalis (Edward G. Robinson), the richest man on the Barbary Coast. He owns the biggest gambling house in town, the Bella Donna. Mary decides that her adventures should begin there. 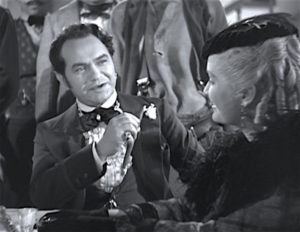 “Now let’s you and me understand each other. You ain’t stayin’ in San Francisco for to go into society, are you? You’re staying here for gold. And you didn’t bring a pick and shovel with you either. –You seem to have everything all figured out. You’re quite right. I’m staying for gold.” –Louis and Mary

When Mary enters the Bella Donna and takes a room there, a hush falls over the crowd at the sight of this beautiful new “white woman” in town. Louis, sporting a pirate’s dangling earring, immediately becomes intrigued — as well as territorial. He brags to her that he owns all of San Francisco. He offers Mary a proposition: If she will become an attraction for all the gold miners in his “house,” he will make her very rich. All she has to do is run a rigged roulette wheel.

Mary’s social position in the city becomes clear while out shopping with Louis. The mayor and his wife refuse to be introduced to her. To diminish her shame, Mary tries to focus instead on the riches she is accruing. She coolly runs the roulette table, winning miners’ entire fortunes for the house. One of the miners threatens to tell the whole city about the cheating that goes on at Mary’s table. Knuckles Jacobi (Brian Donlevy), Louis’ main enforcer, goes after the miner and shoots him. The sheriff tries to arrest Knuckles, but Louis bribes the judge and clears Knuckles of all charges. 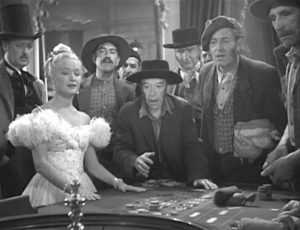 Colonel Cobb, Mary’s shipboard friend, starts a newspaper, the Clarion. Louis wants to destroy the press but Mary begs him to spare it. Louis relents, but tells Marcus that he must run the paper according to Louis’ rules. Louis desperately wants Mary to love him. He calls her “Swan” because of her softness, but she seems to have no feelings for him. 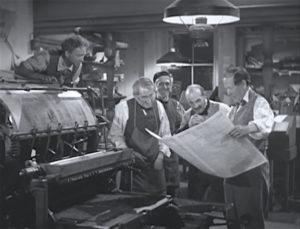 The pressure from Louis begins to wear Mary down. She takes a ride into the countryside during a rainstorm in order to clear her head. She takes refuge from the storm in a little cabin. There she meets meets James Carmichael (Joel McCrea), who is about to leave San Francisco with a fortune in gold. Mary lies to him about who she is, and revels in a few moments of romantic fantasy with this handsome young stranger. 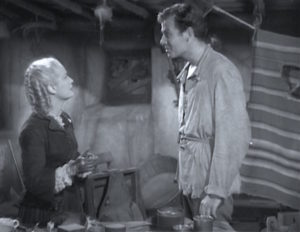 “Lamb kidneys, ma’am. Only they don’t seem so important now. Can’t I see you home? –You’ll miss the boat, Mr. Carmichael. –Well, Aren’t I ever going to see you again? –Please, I’d like to remember it just like this. The rain, the fog, and a poet from Gramercy Park with his bags of gold. Let’s just leave it that way. –It’s awfully hard to live poetry, ma’am.” –James and Mary

James reaches San Francisco harbor but finds that his ship has been delayed because of heavy fog. Old Atrocity (Walter Brennan) finds James on the dock and leads him to the Bella Donna, promising him a home-cooked meal. There James spots Mary running the roulette wheel and grows bitter. He gets drunk and bets all of his gold on one roll of the wheel. He loses his entire fortune. 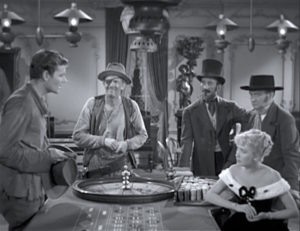 Destitute and feeling betrayed, James asks Louis and Knuckles for a job. He plans to work as a busboy until he earns enough for passage to New York. Mary tries to give him some money just to get him out of her sight. Thus the romantic triangle is set up between Louis and James. Mary doesn’t think the young, poor James with his poetic nature can fulfill her lifelong dreams of wealth. On the other hand, the ruthless Louis doesn’t do much for her either, even though his passion has a dangerous intensity. Is there any hope for “Swan” in this situation?

Miriam Hopkins delivers a fiery performance, alternating easily between emotions. Hopkins was a big star in the 1920s and 1930s and is most famous for starring in the first three-strip Technicolor feature, “Becky Sharp.” Her acting style is reminiscent of Tallulah Bankhead or Jennifer Jason Leigh. The role of Mary Rutledge, a single woman among many rough and ready men, seemed ideal for her temperament.

The Barbary Coast is an interesting film, directed by Howard Hawks, with intriguing and unpredictable characters created by Ben Hecht and Charles MacArthur. The supporting actors, such as Walter Brennan, Brian Donlevy, and Harry Carey, Sr., have small but memorable roles. It’s worth a look at the San Francisco of Gold Rush days — and the way a story like this was told in the 1930s. 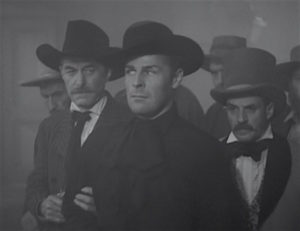