Annie Oakley, whose career extended into the early decades of the 20th century, represented an icon for early 20th century women. As an independent, talented female celebrity, she traveled with Buffalo Bill’s Wild West Show and brought the culture, legends and romanticism of the West to people all over the world.

“I’ve been on this earth sixty years and that’s the first time I ever saw a woman go in a saloon. –Next thing you know they’ll be smokin’ cigarettes! –Oh, talk sense, man, talk sense.” –two saloon patrons in Cincinnati

The story of Annie Oakley has been told in the movies numerous times, most notably in Annie Get Your Gun and Buffalo Bill. In George Stevens‘ 1935 version of Annie Oakley, Barbara Stanwyck does a good job portraying Annie’s metamorphosis from shy, young country girl to quiet, confident athlete and star. As a biography, albeit Hollywood-style, there is enough accuracy to get the flavor of one of the biggest show business successes in the early 1900s. And when compared to actual footage of Buffalo Bill’s show, the film does an impressive job recreating the original acts with outstanding realism.

Along with cameos by the actors Gabby Hayes and Stepin Fetchit, there are featured roles by Andy Clyde (a TV favorite in the 1950s and ‘60s) and Pert Kelton (later famous as Shirley Jones’ mother in The Music Man); and starring roles by Barbara Stanwyck (Annie Oakley), Preston Foster (Toby Walker), and Melvyn Douglas (Jeff Hogarth). 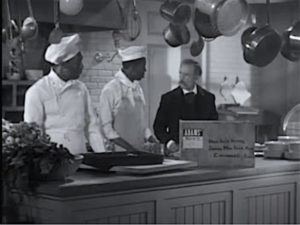 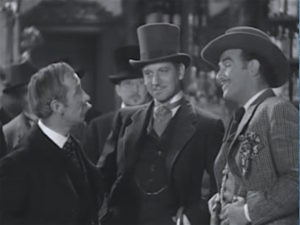 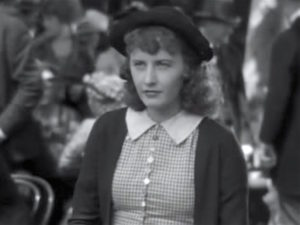 Annie Oakley is a teenage girl living in the backwoods of Ohio. She earns a living for her mother and siblings by hunting game. She shoots quail so beautifully, always with just one bullet through the head, ensuring that her game is in demand at restaurants as far away as Cincinnati. Annie takes on a sharpshooting bet with Toby Walker, a sophisticated New Yorker, recently signed with Buffalo Bill’s Wild West Show and Congress of Rough Riders. In the match, Annie ties Toby with every shot. She finally misses a shot, but it’s on purpose: she thinks that Toby will lose his new job if she wins the match. 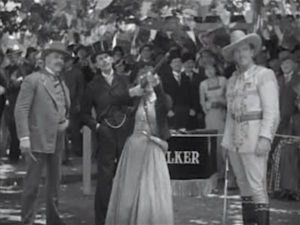 “—What’s a kid like you know about guns? –I got one here, it went clean through the Civil War! –Well gee well gol well gee whiz! Don’t tell me you shoot with a thing like that! –Course I do! –What do you shoot, doodlebugs? You hang around, kid, and you’ll see some shooting at this shoot. –I’d figure on seeing some tall shooting otherwise I wouldn’t be here. –Up from the sticks to see me make a monkey out of that Oakley? – The shootingest monkey you ever saw! And we got 37 dollars says so. –No… about all the ready cash in that county I suppose. Bring on that hickory nut knocker! –Mr. Walker, meet Miss Hickory Nut Knocker. Your opponent Miss Annie Oakley!” –Toby, Annie, & Jeff

Buffalo Bill’s manager signs Annie for the show on the strength of her performance in the shooting match. Toby becomes her mentor, teaching her tricks and showmanship. Annie gradually becomes a star attraction for the Wild West Show. During one performance, Chief Sitting Bull is in the audience. He is positively thrilled by Annie’s performance and gives her a Sioux name which means ‘Little Sure Shot.’ 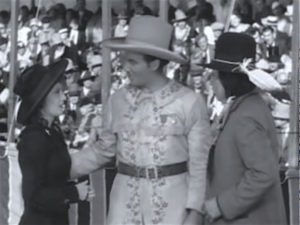 The rest of the film follows the evolution of the popularity of the Wild West Show and Annie’s personal development, while a love triangle forms between Annie, Toby, and Buffalo Bill’s manager, Jeff Hogarth (Melvyn Douglas). Eventually, the show tours overseas, after which the show’s slogan reads, “Performed Before All the Crowned Heads of Europe.” Annie has certainly come a long way from quail shooting in the Ohio backwoods. 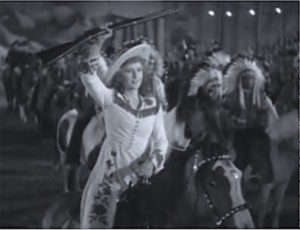 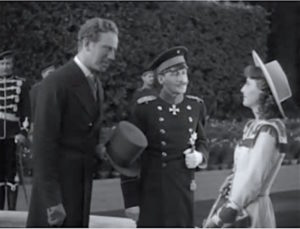 A highlight of this film is the characterization of legendary Lakota holy man Sitting Bull (played by Chief Thunder Bird,) the mastermind behind Little Big Horn, who is tasked with managing the Native Americans in the show troupe. Because he’s the chief, he isn’t bound by rules and he usually does exactly as he pleases. One evening when the troupe spends the night in a Cincinnati hotel, he becomes tired and wants to go to sleep. Unable to understand how to shut off the gaslight chandelier in his room (he speaks no English), Sitting Bull gets out his gun and shoots out the light. He simply gets things done the most efficient way. 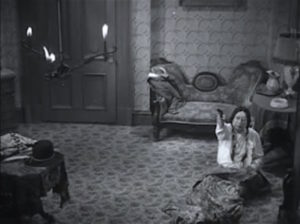 Annie Oakley delivers a strong Barbara Stanwyck performance, presents an authentic slice of early 20th century American show business, and works hard to further the romantic myth of the west for the American public, made during a time when the cowboy was king of the movies.

Annie Oakley is a hero to me. She was an amazing athlete who strove to maintain dignity and ladylike behavior while making a living in the rough show business at the turn of the last century. Annie’s true life story would make a good movie too. The star of the Wild West show was born and raised in Darke County, Ohio, near Greenville. When she was 15, she met Frank Butler in a shooting match in Cincinnati, which she won. Frank was very supportive of her and became her husband a year later. They had a close, happy life together.